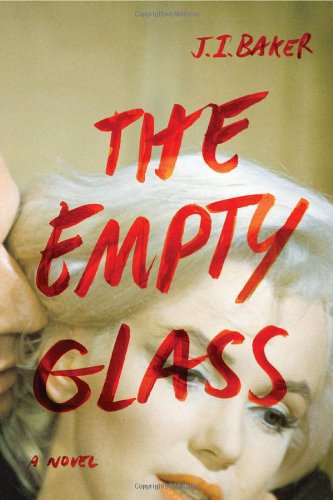 “In terms of quality, The Empty Glass is far from empty.”

Is it worth noting that among the many many many many books being published, reissued, and hastily glued together in “celebration” of the 50th anniversary of the death of Marilyn Monroe (the circumstances of which are still intriguingly unknown), the most scrupulously researched one is a work of fiction?

Or is it more important to say that this new book, The Empty Glass by J. I. Baker is a taut, modern noir offering in the mold of Raymond Chandler—and is a perfect delight to read?

The mystery, of course, is a whodunit revolving around the death of a Hollywood sex symbol:

“He told me who it was. I remembered reading scandal-sheet stuff about a film she hadn’t finished. I had a copy of Life magazine with her last interview: ‘It might be kind of a relief to be finished,’ she had said. ‘It’s sort of like, I don’t know, some kind of yard dash you’re running, but then you’re at the finish line and you sort of sigh—you’ve made it! But you never have—you have to start all over again.’”

The quote’s right, the attribution’s correct—if only some of Marilyn Monroe’s biographers had done so well.

Our protagonist is a movie star handsome (aren’t they all) deputy coroner named Ben Fitzgerald whose position gives him access to the crime scene, certain bits of evidence (most important is the little red diary and the startling information it contains), even the corpse:

“The most famous woman in the world was now Coroner’s Case No. 81128, her toe tagged in steel crypt 33. The crypts covered a wall in the basement where the rats were. They looked like numbered freezers. I opened 33, pulling the lever below the temperature gauge, and saw the toe tags. I wheeled the body on the stretcher to Table 1 in the windowless room, looked at the flesh on bright steel with the hose and the drainage system, the sink and the suspended scale.

“A sheet was pulled up over her breasts. Her eyes were closed, her hair hanging limp as if she had just washed it.

As a past editor of Us magazine J. I. (James Ireland) Baker is well aware of just how to write short, write fast, and write punchy—so much so that The Empty Glass seems to end far too soon.

In its pages, Hollywood comes alive as a pungent, raunchy place where even tough guy mobsters, famous actors, and even sitting presidents are all under the thumb of Confidential magazine (which reportedly was among those, along with the FBI and the mafia, bugging Monroe’s home).

In terms of quality, Glass is far from empty. The plot on the book, hinging as it does on what might have been the suicide, the accidental death or the murder of the world’s most famous woman, mines one of the richest veins of intrigue, corruption and betrayal of the previous century. To tell anything is to say too much, as there is a great deal of enjoyment to be had in reading The Empty Glass.  Mr. Baker pitches his author’s voice perfectly, and while digging for gold in telling his tale (Mr. Baker actually manages to find a fresh motivation to explain the chain of events that lead to the actress’ death.), the author comes up with some lines, some ideas and images that will set any other writer’s teeth on edge with jealousy.

“I sat on one of the chairs that had been worn over the years by women who waited for people who never arrived and things that never happened.”

“She stood above me as I lay on a gurney near a moaning guy on yet another gurney just two feet away. She was dressed, as always, like Edith Head.”

“You, you hussy,” the nurse said, “are the whore of Babylon.”

“As long as my reputation hasn’t reached Beverly Hills.”

“Jo, being Jo, dressed in sort of a Cecil Beaton version of poverty…to me, she looked like Grace Kelly in The Grapes of Wrath.”

“I never understood why they call a face a mug until I met Fred Otash. He face was half jowls and half eyes.”

“She transferred her cigarette to her left hand and extended her right wrist. . . . She wanted me to kiss, not shake, it. So I did. Her whole face puckered in a smile. She smelled of an Eau de Something that only partly masked a deeper smell, that of nicotine and, more, decay.”

All illustrate the fact that in writing The Empty Glass J. I Baker is a writer at the top of his game. The book is a pleasure to read, its language gives to the eye and mind what a fine wine presents to the nose and tongue.

Most importantly, somehow in some strange way, Glass evokes the spirit of Marilyn Monroe, as our hero comes perhaps to love her a little while investigating her death, in a way that no other book out this year has managed to do. And her ghost haunts every page.

As to the mystery?

Only one small clue. The book begins with a telling quotation from John F. Kennedy:

“The great enemy of the truth is very often not the lie—deliberate, contrived, and dishonest—but the myth—persistent, persuasive, and unrealistic.”

And you can take it from there.