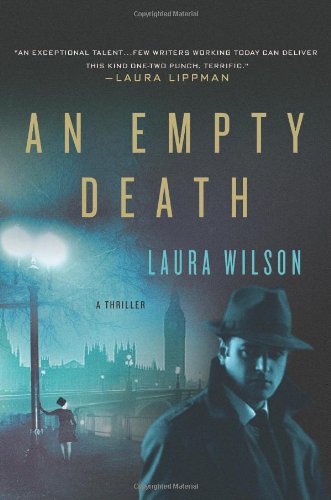 An Empty Death from Laura Wilson is the second novel in the Scotland Yard Det. Insp. Ted Stratton series, first introduced to us in the excellent, An Innocent Spy (Stratton’s War in the U.K.).

An Empty Death takes place in the summer of 1944 in war-ravaged London. After almost five years of conflict, the city’s exhausted inhabitants, pounded by the menace of Hitler’s lethal V1 bombs, are living in a world of dereliction, death, and destruction.

War-weary Ted Stratton is no exception, but he cannot help being drawn in by his latest case. Called on to investigate when a Dr. Reynolds is found dead in Fitzrovia’s Middlesex Hospital. The doctor had head traumas and the initial assumption is that falling debris caused this unfortunate and bloody accident; however, true to form, DI Stratton nonetheless digs a bit deeper to rule out a homicide. He soon learns that Dr. Reynolds chased after the nurses at his hospital—and not for mere exercise. The good doc also allegedly failed to provide proper care to patients who died from his seeming neglect. Stratton realizes that someone involved is not who they appear to be. The circumstances of the death seem suspicious: an affair turned sour? Revenge? As Stratton digs deeper, he begins to suspect something more sinister is going on: that a faceless shadow is stalking the hospital corridors and able to move and kill freely.

Meanwhile Jenny, Stratton’s wife, is working at the local Rest Center, although her spirit of “make-do and mend” is wearing thin; when Stratton helps to dig Mrs. Ingram out of her bombed-out home, Jenny agrees to help look after her. When Mrs. Ingram declares that the man claiming to be her soldier husband is an imposter, Jenny assumes that it is due to shock. The reality, however, is far stranger and much more dangerous. But can Stratton figure it all out in time, before any more deaths coming knocking at the doors?

An Empty Death is a taut and atmospheric thriller with memorable flesh and blood characters. The plot is multifaceted, and perfectly paced, and the imagery and suspense employed by Wilson, as well as her diverse cast of villains and heroes make this a substantive and satisfying novel that should appeal to an even larger audience beyond that of the crime or history genre. It should certainly add bookshelf longevity to the refreshing Stratton series, and that can only be a good thing.