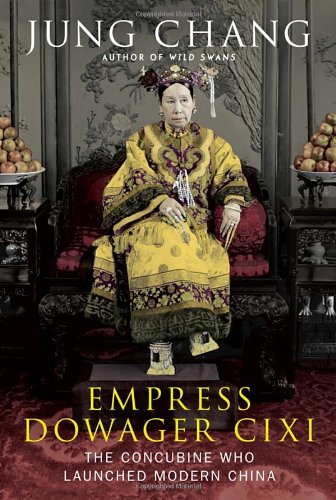 A new publication by Jung Chang the author of the bestselling Wild Swans is always going to be an event, and the Empress Dowager Cixi: The Concubine Who Launched Modern China seems likely to garner plaudits not only from students of China but from anyone interested in world affairs and China’s role therein.

Indeed the reader is frequently prompted to compare and contrast the relations between China and the West, as well as between China and Japan then and now. Jung Chang charts against a detailed canvas of national and international events and intrigues the tumultuous story of Empress Dowager Cixi from her relatively humble beginnings as an imperial concubine through four decades of power behind the throne first of her son, Emperor Tongzhi (1861–75) and then of her adoptive son Emperor Guangxu (1875–94) whose death by poisoning she deemed politically expedient—and oversaw.

While the author overtly aims to correct the impression conveyed by other historians and scholars that Cixi was on the one hand “tyrannical and vicious” or on the other “hopelessly incompetent” this is much more than just an attempt at feminist revisionism.

Ms. Chang recognizes that while Cixi was a “giant” she was certainly not a “saint” either in her public or her personal life. Despite her extraordinary statesmanship which enabled her to amass and mobilize formidable power for good both at home and in international relationships she made many serious errors probably chief among them her failed attempt to use the Boxer movement in 1900 as a way to ward off the incursions of European powers.

She was also accused of diverting massive amounts of funds intended for the navy to restore her Summer Palace, and of dealing ruthlessly with opponents or those whose existence became inconvenient. But as Ms. Chang reminds in terms of love of luxury or revenge she was not alone and indeed her behavior could be regarded as moderate for the time she lived in.

From today’s perspective the most interesting aspect of the book as the subtitle suggests is the depiction of her role as a modernizer and her opening of essentially feudal China to the West. Thanks to her initiatives railways, the telegraph, a modern army and a navy, trade, a modern education system, press freedom and the right to vote were all introduced into China.

Interestingly given China’s current economic might commerce and banking acquired respectability for the first time, merchants having been traditionally regarded as the lowliest of professions. Opium consumption introduced by the British was outlawed through a Ten Point Plan; and foot-binding for women, a Han rather than Manchu practice was made illegal.

Chinese students were sent abroad for the first time in 1866, and other officials were dispatched to the West on the equivalent of the European Grand Tour. In 1867 the outgoing US Minister to Beijing was appointed China’s Ambassador Extraordinary to Europe and America on account of his “always having the interests of China at heart.” How many modern Americans are aware of that extraordinary fact?

Cixi had her portrait painted from life by an American painter, Katherine Carl—a notable departure from the normal practice of painting only dead ancestors—and became affectionate friend of the painter. She posed for photographs among her eunuchs in stage costume which gave rise to unfavorable comment. Earlier in her reign her love for a eunuch, Little An, had led her into serious misjudgment for which she and the eunuch paid heavily, Little An with his life.

We see her views of some of her Western contemporaries notably Queen Victoria and theirs of her. Most tellingly Cixi reflected that China was unable to thrive as well as Western countries did because of the lack of connection between rulers and ruled and that the connection could only be created by the introduction of the right to vote.

Comparing herself with Queen Victoria whom she admired Cixi noted however that Victoria had parliamentary democracy to support and guide her whilst she had “’400,000,000 people all dependent on my judgement. Although I have the Grand Council to consult with . . . Anything of an important nature I must decided myself.’” And indeed throughout the book with a few exceptions the toiling masses are notable only by their absence.

Ms. Chang provides glimpses of off-duty Cixi; her enormous and sumptuous wardrobe and lavish gift-giving; her skillful kicking of a shuttlecock well into her fifties; her remarkable training and taming of birds to come to her hand—though her fish-charming seems to have been less successful.

As striking as these intimate vignettes of her habits and preferences is the list of things that Cixi could not do; despite four decades in power she never entered the Forbidden City through the front door which was a privilege allowed only to men; although she had a splendid car given to her by one of her advisors, General Yuan, she was never driven in it as this would involve the chauffeur sitting down in her presence, an intractable problem. With rare exceptions her male interlocutors never saw her face to face except toward the end of her life and for very brief periods.

This is a rich and fascinating book that never relaxes its hold on the reader despite the marshalling of a mass of complex historical details seen through the prism of Cixi.

It would however be interesting to know more as to how Jung Chang has been able to present a more rounded and empathetic picture than has hitherto been the case (with some few exceptions which she does not mention). Has she had access to new data or has her analysis of data available to everyone simply been more empathetic.

One cannot help but feel there are still many more books waiting to be written about this fascinating period of Chinese history.