The Empowered Citizens Guide: 10 Steps to Passing a Law that Matters to You 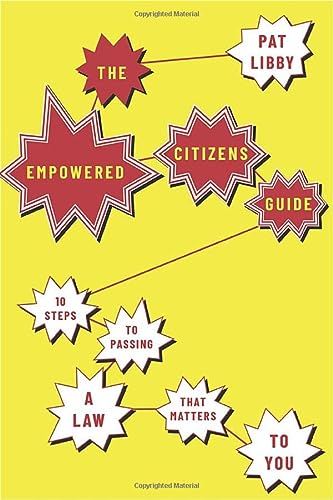 “For the just curious about how a law gets passed or those itching to make it happen, this guide has all the answers.”

Though most people might not expect a guide to lobbying and getting a law passed to be a fun read, The Empowered Citizens is just that and more. Full of practical advice with a touch of light-heartedness, Pat Libby makes a complex legislative process seem, if not simple, at least doable, by providing clear explanations, graphs, documents, charts, and real-life examples of winning lobbying campaigns. Her down-to-earth, humorous style makes her the perfect coach for every wannabe successful activist.

A “recovered” academic and national expert on citizen lobbying campaigns, Libby is passionate about giving each of us a voice and teaching us the tools we need to come together to change the world. This book is for “anyone—from newbie to been-there-and-failed—who wants to understand how to successfully put together a lobbying campaign.” Success can be theirs by following Libby’s 10-step guide to educate and influence lawmakers on any governmental level, which is what lobbying is all about.

Although the lawmaking process is complicated, Libby reminds us that it begins with a germ of an idea. She provides a general outline of how to transform this idea into a bill and explains a multitude of governmental terms such as lobbying, advocacy, bill, ballot campaign, and executive order. She encourages advocates to familiarize themselves with governmental processes but urges them to put the bulk of their efforts into becoming walking encyclopedias on their chosen subject.

Libby devotes a chapter to each of the 10 steps necessary to get a law passed, schooling readers about what to do and not do based on governmental rules and procedures and her vast experience. To illustrate each step, she uses a case study of a law that was passed to prohibit minors from buying cough medicine containing a drug that causes a potentially deadly hallucinogenic high.

Step 1, Identify an Issue, explains how to get started. Cautioning that “it’s not that easy to pass new laws because legislators tend to spend lots of time weighing the pros and cons of ideas that are brought before them,” Libby maintains that laws which make it over the finish line do so because they come from great, timely ideas and evoke passion that generates action.

Step 2, Research the Issue, describes how to determine what’s doable by fact-finding, conducting a cost-benefit analysis, interviewing experts, and investigating how previous efforts to turn similar ideas into law have fared.

Step 3, Create a Fact Sheet, focuses on developing one brief and one lengthy document to convince people of the campaign’s importance and stir up emotion. Libby describes the purpose of a fact sheet and all that it entails as “both an art and a science.”

Step 4, Brand the Issue, teaches readers how to market their idea to win over constituents and convert potential opponents. She says, “The name of your campaign needs to be easily communicated to a broad audience who can in turn put pressure on their legislators to act.”

Step 5, Map Out Possible Supporters and Detractors, is about making lists of who fits where. Libby encourages advocates to cast the widest net possible in terms of individuals, groups, organizations, and legislators and to aim for bi-partisan support. She stresses that more supporters means greater likelihood of success.

Step 6, Form a Coalition, explains how to continually keep adding people to a campaign, including “odd bedfellows,” and make sure everyone is kept informed each step of the way. Her advice is to seek out “people who have been directly affected by the issue or will feel the impact of the law if it’s passed.”

Step 7, Develop Educational Materials, describes what’s needed to educate the public and legislators, including letters and talking points that are easy to read and action-oriented, then making sure materials are distributed widely. Libby emphasizes that the goal of materials is to educate in order to mobilize.

Step 8, Launch a Media Campaign, lays out what’s needed for a knock-out website that will be constantly evolving. Libby stresses the need to control social media and use all kinds of media outlets to get coverage. She shares how to write a press release and communicate professionally with reporters and journalists.

Step 9, Approach Elected Officials, details the do’s and don’ts of setting up meetings by doing the necessary homework for each appointment, being prepared, rehearsing like crazy, acting respectfully no matter what happens, and (like Mom told you) writing thank you notes.

Step 10, Monitor Progress on the Issue, explains how to stay up to date with all that’s happening in a campaign and ensure that coalition members and other supporters are kept in the loop. This involves having a general idea of what’s next, developing a Plan B, expecting the unexpected, and showing flexibility and creativity when the need arises.

After presenting her 10-step guide, Libby describes the ongoing implementation work that’s required after celebrating a law getting passed—monitoring enforcement and even fighting a possible attempt to repeal a hard-won law. The book’s appendix covers various types of legal lobbying, which might surprise even seasoned advocates, and provides useful forms for government reporting.

For the just curious about how a law gets passed or those itching to make it happen, this guide has all the answers.