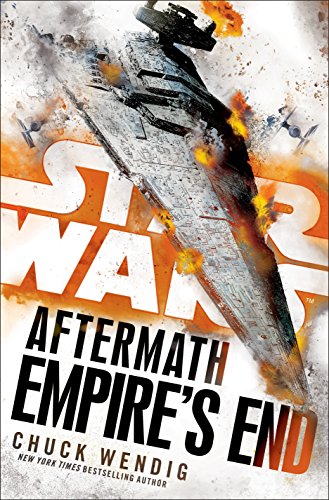 "Although reeling from a crippling Imperial attack, the New Republic has managed to drive the remnants of the Empire into hiding. Still, the threat of continued violence will always remain while the war persists . . ."

Those words come after the iconic "A long time ago in a galaxy far, far away . . ." and the reader can almost imagine the words scrolling up a screen as opposed to be printed on a page. Regardless of where the words are, Chuck Wendig manages to do two things to the Star Wars saga: honor it with a story that does the original proud while also creating new characters that hold their own against such legends as Han Solo and Princess Leia.

Empire's End is Wendig's last novel in the Aftermath Trilogy of books that help fill the time (and space) between what happens at the end of Return of the Jedi and what happens in the beginning of The Force Awakens.

Just as with the first two novels in the series, Empire's End focuses on a misfit crew that includes an ex-imperial, a bounty hunter in serious debt, a teenager and his kill droid, and their leader, Norra Wexley, a Rebellion (now New Republic) fighter pilot that struggles to balance personal needs/wants with what is best for the New Republic.

Joining the newer characters are familiar faces like Han Solo, Chewbacca, Princess Leia, Mon Mothma, and several others, including a certain Gungan that has been much maligned over the years due to the less than favorable reception of the Star Wars prequel movies. However, using some excellent storytelling, and a little tug on the ol' heartstrings, Jar Jar Binks is certainly redeemed. The novel is well worth the read just for this glimpse into the wider Star Wars world.

As it is the third in the series, there is not much that can be said of Empire's End that hasn't been said about the first two books. Tight writing, fast-paced action, characters that speak to the reader on a relatable level, and enough traditional Star Wars lore that the Aftermath Trilogy fits just where it is supposed to fit in the new canon of novels that is being put out.

With that said, it is unfortunate that the quality of this series, and especially this final installment, has been under attack from the beginning by those that disapprove of its place and content. The original canon licensed by George Lucas was scrapped by Disney (the new owners of the rights), resulting in a backlash of toddlerian proportions. Not to mention that Wendig dared include a diverse cast of characters that includes—gasp!—people representative of the LGBTQ community.

Hopefully, those who understand great writing and solid storytelling will give this series a chance. Empire's End will not disappoint those that do believe more in the power of the Force, as opposed to the evil of the Empire.