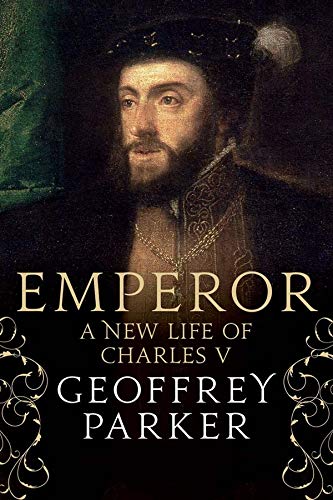 “[A]n exhaustive biography of the remarkable Habsburg ruler coupled with important insights into the birth of the modern state system of Europe . . .”

In writing a new biography of Emperor Charles V, who in the mid-16th century ruled Spain, Germany, parts of the Netherlands, parts of Italy, served as the Holy Roman Emperor, and ruled over the first transatlantic empire in the Americas, historian Geoffrey Parker undertook a monumental task. He learned several languages, read hundreds of previous biographies of Charles, consulted numerous primary sources, and visited the many places where Charles lived and traveled to during his lengthy and eventful reign.

The result is an exhaustive biography of the remarkable Habsburg ruler coupled with important insights into the birth of the modern state system of Europe that only fully emerged after the Peace of Westphalia in 1648.

Charles was born in 1500. His father Archduke Phillip of Austria died six years later. Charles’ grandfather Maximilian was head of the House of Habsburg, and Charles’ mother was the daughter of Isabella of Castile and Ferdinand of Aragon. Parker notes that it was Maximilian who “laid the foundation for four centuries of Habsburg domination in central Europe.”

Maximilian’s goal, Parker writes, was to rebuild “a Christian world empire.” He sought to neutralize France, renew a crusade against the Turks, and “reform the chaotic central government of the Holy Roman Empire.” Charles V would follow closely in his footsteps.

The Habsburgs extended their fiefdoms by what Parker calls “matrimonial imperialism” and war. Royal marriages were arranged to further dynastic goals. The more lands the Habsburgs acquired, the more they had to defend. This proved costly in monetary and human terms and also produced reactions from other European powers. This was an early example of how the “balance of power” would operate in Europe for the next four centuries.

Charles V as Holy Roman Emperor was also a defender of the Roman Catholic faith, second only to the Pope. In the 16th century, Popes were equally religious and political leaders, and Charles V often clashed with them over European politics but also joined with them in struggles against the Ottoman Turks. Parker details Charles’ personal religious beliefs and practices, as well as his efforts (which proved unsuccessful) to undermine Lutheranism in Germany.

Throughout Charles’ lengthy reign (he ruled in his own right from 1517 to 1555), war was a constant companion. He was very much a warrior-emperor, often leading his troops into battle and exposing himself to enemy fire. For example, during the war against the Lutheran Schmalkalden League in 1546, Charles led a force of more than 34,000 troops at Ingolstadt, Bavaria, and was described as “immobile as a rock” as enemy artillery and bullets rained down all around him.

Parker quotes a Venetian ambassador of that time about Charles and war: “[He] cannot conceal the pleasure he takes in war. He is happy then, he comes alive.” Some biographers would later say the same thing about Winston Churchill.

He frequently engaged in what is now called summitry, meeting and negotiating with, among others, England’s Henry VIII, Francis I of France, and the Pope and other Italian leaders.

In running his empire and fighting his wars, Charles benefitted from the efforts of talented statesmen such as Mercurino Arborio de Gattinara (his grand chancellor) and shrewd military men such as the Duke of Alba.

Charles V also ruled the first global empire after his Spanish subjects (Cortes and Pizarro most famously) conquered territory across the Atlantic in America. Indeed, he used gold, silver and other resources from America to help fund his European and North African wars. Remarkably, Parker notes, Charles issued more than a thousand legislative acts to “regulate the economy, society and administration of the New World,” including acts establishing universities, some of which exist to this day.

He believed that God would watch over him, protect him from serious harm, and help him achieve success on the battlefields and elsewhere. Charles’ deep religious faith affected every aspect of his public and private life.

That did not mean that he was always pious and always acted consistent with Christian principles. He had a ravenous sexual appetite that he repeatedly satisfied, Parker notes, and fathered several children with women other than his wife. He effectively imprisoned his mother for a time and frequently neglected his wife. He could be cruel, self-righteous, and inflexible.

Yet as Parker notes, “[t]hroughout his life he performed daily devotions and he retired to a monastery each Easter and also after his abdication.” And Parker believes that Charles truly cared for the downtrodden, including the native peoples in America.

Near the end of his reign, Charles wrote a “political testament” for his son and successor Phillip II. Written in 1548, it is a remarkable document filled with sage political and religious advice.

He urged Phillip to defend the Catholic faith and to “submit all your desires and actions to the will of God.”  He lamented the costs of his wars and urged Phillip to avoid them if at all possible. But he also cautioned that successful diplomacy must be backed by force.

It was necessary, Charles wrote, “to understand the actions of other states and rulers, and maintain friends and informants in all areas.” He urged Phillip to maintain good relations with the Pope, something Charles did not always do.

Charles identified important allies such as Cosimo de Medici in Florence, and he called Genoa the most important Habsburg possession in Italy “because of its economic ties with various Habsburg dominions, and because it permitted access from Naples, Sicily, Sardinia, and Spain to Lombardy, Germany and the Netherlands.” But France, he counseled his son, posed the greatest security threat to the Habsburg Empire, and that included the security of his American lands.

Parker calls Charles’ “political testament” a “frank overview of the current state of his empire and its problems, and a blueprint for dealing with future problems.”

In the early 1550s, Charles’ health deteriorated. His last military campaigns in 1551–1554 were difficult. His decision-making suffered, Parker believes, because he increasingly relied on the counsel of a small group of advisers, and some of his best advisers had passed from the scene. His siege of Metz proved disastrous and the French army advanced into Germany. The financial costs of war were crippling.

Charles’ physical and psychological exhaustion eventually led to his abdication in 1555. He retired to a monastery in Yuste, Spain. His health further deteriorated. He died on September 21, 1558, after begging Christ to forgive his sins.

Parker notes that even in death Charles cast a long shadow. The geopolitics of Europe “for the next two centuries . . . revolved around attempts to separate the various territories accumulated by Charles.” His empire was the first modern European hegemon. Others—Louis XIV, Napoleon I, Kaiser Wilhelm II, Hitler’s Germany, and the Soviet Union—would follow. “Charles’ vision,” Parker concludes, “continued to shape strategic thinking long afterwards.”