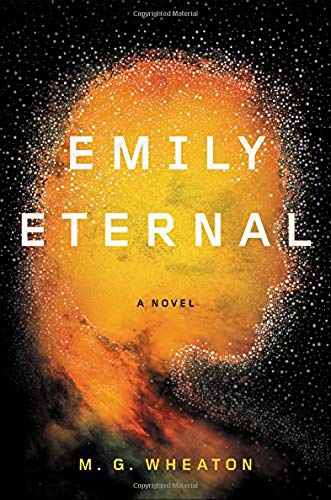 Humanity is caught off guard when the sun undergoes a sudden phase shift from a yellow dwarf to a red giant. In the months before all life on the planet will be permanently extinguished, governments and scientists formulate and reject plan after plan in a vain attempt to ensure the survival of the human race.

In desperation, the powers that be turn to Emily, an advanced artificial intelligence program who prefers to be referred to as an artificial consciousness.

Designed to be “the world’s first nonhuman psychiatrist/brain researcher,” Emily is capable of a “near-human level of conversation, perception, and medical insight.” Through the use of a special interface chip, they perceive Emily as a young woman in her early thirties with a kind face, a fragrance of kiwi-infused shampoo, and the ability to give good hugs.

Unfortunately, the plans of the MIT laboratory where Emily was created have been permanently derailed by the looming destruction of the world. Can Emily be used to find a way out of this disaster? And if she formulates a plan that might actually work, will the powers that be allow her to bring it forward, or will they pull the plug on her for malevolent reasons of their own?

Emily Eternal is a fast-paced, well-written science fiction thriller by Mark Wheaton, a screenwriter and producer who has also published the Luis Chavez hard-boiled mystery series and is known for his columns in Fangoria, Dreamwatch, Shivers, and more.

Although the opening chapter is choppy and disorienting, the novel quickly settles down as Emily’s personality asserts itself on the narrative. Told in the first person, the story soon convinces us that although she is the product of very sophisticated lines of code, she’s nonetheless quite life-like. She wins the reader over with her earnest self-consciousness and desire to be liked by her “colleagues” in the project.

In addition to her ability to appear before people as a real person, she also has the ability to enter a human’s mind, using the interface chip as a gateway. As the action unfolds she discovers, for example, that this power allows her to take control of the person’s body and employ advanced self-defense techniques to escape dangerous situations.

As Wheaton uses this device multiple times to write his way out of scenes, it begins to take on the creepiness of The Puppet Masters as Emily assumes control over the consciousness of real people much as Heinlein’s slugs turned human beings into “hag-ridden” zombies. There’s a fine line between altruism and enslavement. Will Emily cross it before she’s done?

The author keeps us guessing as the situation becomes desperate, and Emily must do things her programming tells her are unethical and improper. At the same time, Wheaton never lets us forget how close to human Emily actually comes, while just falling short.

A good example presents itself when she and two human companions run for safety from a team of assassins through snowy streets. Emily scans their surroundings for threats:

“I glance down the sidewalk but still see no one else. When I look back, what jumps out at me is the trail of footsteps in the snow—one line for Jason’s, one for Mayra’s, none for me.”

By the time the novel’s over it feels as though the author has thrown everything at us but the kitchen sink, but readers will finish this suspenseful speculation about the next step in human evolution hoping that Wheaton has enough material left over for a second foray into speculative fiction, and perhaps even a third and a fourth.

Emily Eternal is a novel you’ll be glad you read, and M. G. Wheaton is an author who is obviously perfectly comfortable writing in this genre.