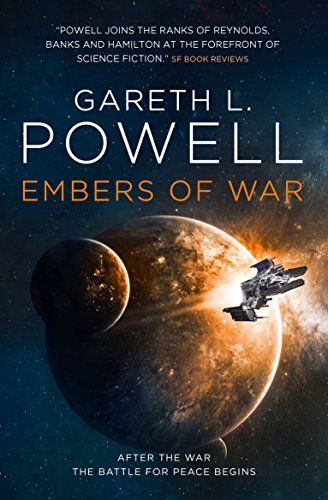 When you have an imagination like Gareth Powell’s, you must write or paint or otherwise vent that imagination through art so your head won’t explode.

Happily, Powell chose writing, and he vents his imagination through science fiction. That’s a good genre for so much imagination, because of its scope—the universe and beyond, with all things possible.

In Embers of War, his sixth novel and first of a new trilogy, he explores the endless need to fight for peace. Centuries in our future, humans have joined the intergalactic world and mix with all kinds of aliens and environments. While the number of species may be more and different from what we know today, the problems among them are old and sadly familiar.

The story starts after an interstellar war that ended with total devastation of a planet. The starship captain responsible for giving the order to destroy the planet has changed her identity and become a poet; and one of the sentient super-warships involved, the Trouble Dog, has resigned its commission and joined the House of Reclamation.

The House is a politically neutral organization devoted to rescuing people and ships across the galaxies. Its members have disclaimed their former lives and dedicated themselves to atoning for wrongs they have committed, or otherwise need a meaningful mission to validate their lives.

On one such rescue mission, Trouble Dog and her current captain, Sal Konstanz (descendant of the House of Reclamation’s founder) stumble into another war starting to flare up from the embers of war between the Conglomeration and Outward factions (uncomfortably reminiscent of polarized factions today). In trying to stay on task with their rescue mission, they face danger at every turn and also discover a lost race, upon whom the fate of the universe depends.

This simple plot gets deep and juicy in the details. It forms a morality play within a space opera, with literary-style character exploration in thriller-style structure and pacing.

Each chapter is a character point-of-view change among the poet; the captain; the ship; plus two hitchhiking passengers with their own agendas—on opposite sides, of course—and an overlooked alien who keeps Trouble Dog functioning. Each character suffers their own internal conflict and crisis of conscience and is at a turning point in their lives, making each chapter an intense scene of both reflection and action.

And each chapter ends on a mini-cliffhanger, compelling the reader to keep turning pages. The effect is a lot like watching an epic sci-fi adventure film; any of the Star Wars or Star Trek movies come to mind.

The writing itself, meanwhile, is clean and crisp and evocative, full of sensory details and acute snapshots that capture a sense of place. The book overall contains a nice blend of hardware and humanity, with elements of today and a logically projected far future. Underneath it all lies a chill of déjà vu as, despite the astounding changes in technology, people (and non-people) everywhere remain the same.

By the time the dust settles and smoke clears, there’s still a big chunk of backstory left out. But hey, this is volume one of a trilogy—one book a year to follow in 2019 and 2020—leaving much more to be explored. As it stands, this first story closes tidily and leaves us with hope for the future. Most likely, it also leaves a group of enthralled readers hungry for more.