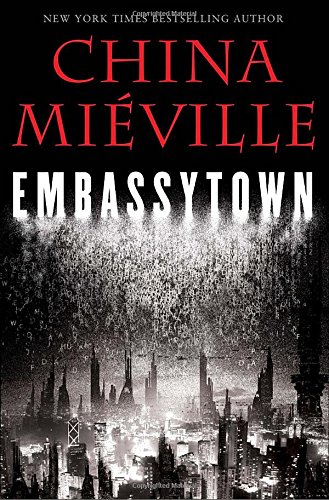 “Mr. Miéville has concocted a deep tale about what it means to be a sentient creature in a potentially endless universe.”

Embassytown is unabashed science fiction from an author who has produced award-winning fantasy and urban thrillers. China Miéville is at the top of his game as a writer, having created in his latest novel an almost perfect balance of world building, storytelling, characterization, and dialogue.

A suburb of the main city on the planet Arieka, Embassasytown is home for the earth people who live there on the outer edge of explored space, administering diplomacy and trade for their colonizing masters. Indigenous Ariekei, known as Hosts, provide the basic necessities of life for the humans. In order to communicate with the Hosts, specially created doppel humans, known as Ambassadors, are required. Two identical twin humans are raised from birth to speak, act, and think as one and carry names like EdGar, MayBel and CalVin. They learn to speak Language, the only and always truthful words of the Hosts.

Reading the first third of Embassytown is not unlike visiting a foreign country where one does not know the language or social customs. Once you are oriented on Arieka the remainder of the story flies by. As adrift as you might feel, the orientation is well worth a close reading. There are layers of meaning at work that include much more than a rip-roaring space yarn. Contact and development of understanding with an alien culture, a philosophy of language, the politics of colonization, the building of empires and the impetus, the planning that become history are just some of these layers.

Avice Benner Cho, who made her mark in Embassytown society as an immerser—one who can operate competently in deep space—tells her story in the first person. She is a great heroine.

Mr. Miéville took a woman, deleted all elements of conventional womanhood—such as childbearing, childrearing, homemaking, servitude, and even any clear-cut sexuality— then created a startlingly accurate picture of what goes on in a female mind. Avice is intelligent, scrappy, and curious, not hung up on herself but not self-assured either. She just lives, enjoys a good time, and doesn’t like to work too hard. Incidentally, she marries three or four times, and her best friend is a robot.

When a new Ambassador arrives in the city and unleashes complete meltdown, Avice finds depths of responsibility and compassion she had no idea were part of her makeup. Amidst plenty of sci fi tropes like bioengineering, odd systems of measuring time, and truly intriguing alien creatures, Mr. Miéville has concocted a deep tale about what it means to be a sentient creature in a potentially endless universe.