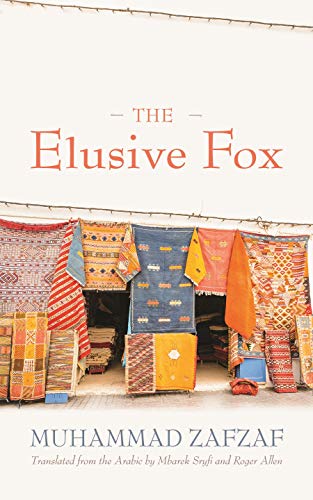 "If reading about smoking hashish were half as interesting as doing it, this novel would be brilliant."

If reading about smoking hashish were half as interesting as doing it, this novel would be brilliant. The Elusive Fox is a philosophical account of a young Moroccan’s adventures in the city of Essaouira during the hippie influx of the late 1960s.

Located on the southern coast of Morocco, Essaouira was famously visited by Jimi Hendrix, as well as thousands of other European hippies attracted to Morocco for its ready supply of hashish and exotica. To have an account of this sub-cultural encounter from a Moroccan perspective, and to visit the Maghreb at such a pivotal time in it’s history, seems like a fascinating proposition; however, these high expectations make the disappointments of this novel more acute.

This is the second work of Zafzaf’s (1945–2001) to be translated in this series; the first, Monarch of the Square, was an anthology of the short stories he is known for in Morocco. While this short novel certainly has value as social history, its value as a work of literature is less clear. English readers with a taste for the great Moroccan writers like Tahar Ben Jelloun,  Driss Khoury, and Leila Abouzeid might find some faint echoes here, but not the full voice.

In The Elusive Fox, Ali, the narrator, is a teacher from Casablanca, with an interest in French existentialism. We accompany him on a number of forays through town, meeting other transients in strangely stilted encounters, smoking hashish at all night parties, drinking, musing on self-knowledge, skirting violence, and having sex with women whom he refers to as “ewes.”

The fox in the title is the protagonist’s alter ego, the animal version of himself who watches humans warily, and considers them a “flock-based society.” The fox’s musings are among the more intriguing passages.

“I shifted my backside on the stool; my bushy tail was about to rip my pants. Touching my nose and mouth, I sneezed. Everything stayed the same, no snout or tail appeared. Thank God for that at least; it would have given the game away, and right in front of a young man who respects me.”

Apart from the fox’s occasional appearances, the action is limited to a series of random meetings that highlight his transitory and shifting perspective. The novel ends when Ali leaves town after three hippie women are found murdered on the beach. He wasn’t involved, but the party is clearly over.

There are some internal conflicts for Ali as he tries to weigh the apparent freedom of the Europeans with his own position. He feels disdain for the hippies in their rootless state; they have no families or history and so no real identity to Ali. But he also admires their mobility: “They are not crazy. If they were, they would not have been touring the entire world without a single penny in their pockets.” The mix of disdain and admiration Ali shows toward the Europeans is one of the stories lasting insights.

One of the weakest elements of this book is the wooden, almost mechanical feel of much of the dialogue. Some of the word choices also seem off. In a scene where the narrator is preparing “a bong” he goes on to describe brewing the leaves in a teapot. A “bong” in American English is a water pipe, similar to the North African hookah or shishah; a teapot is a teapot. It’s a small detail but indicative of a lack of verisimilitude throughout the story. Hippies speak like bank-tellers. Conversations often sound like disconnected slogans, and our efforts to enter the action are thwarted by exchanges like this:

“Why aren’t you smoking?”

“When I’m drinking it doesn’t agree with me. It can make me vomit or give me a bad headache.”

“You know your own self better than anyone else.”

“Know myself that’s a joke.”

“What are you saying?”

“Nothing. All I said was that I really know myself.”

“It’s wonderful for people to know themselves.”

“Never do anything that’ll cause you harm.”

It feels as if something is lost in translation here. Capturing the cadences, and nuances of the cross-language exchanges in Essaouira at this time could have brought the story to life. It’s hard to imagine that Zafzaf’s Arabic would lack in oral richness, but any flavor is simply missing here. While one could possibly argue that this approach shows the detached existential stance the author wanted, it’s simply not effective. It’s one thing to engage a cool dissolute attitude toward one’s experience, but to apply the same attitude toward writing about it rarely works.