Elizabeth and Michael: The Queen of Hollywood and the King of PopA Love Story 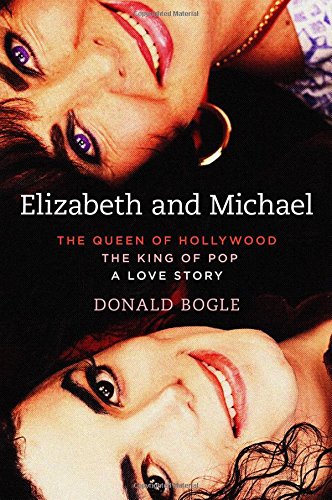 Donald Bogle’s new hybrid biography, Elizabeth and Michael: The Queen of Hollywood and The King of Pop—A Love Story, sort of sets up a web of lies in the first three words of its title. Which comes as a surprise given Bogle’s past biography of Dorothy Dandridge, and especially his extraordinary Heat Wave: The Live and Career of Ethel Waters.

The promise implies is that this will be a book about Elizabeth Taylor and Michael Jackson, who sent any number of years wandering about hand in hand, looking at each other all googly-eyed. They appeared at any number of Hollywood events, and at even more “Jackson Honors” sorts of events and awards that were inexplicably handed out, back when Jackson ruled the nation with a single sparkly-gloved hand. And the apex of their love, that which could not be un-seen, was a moment spent celebrating the odd and somewhat notorious marriage of their mutual friend, Liza-with-a-Z, to the most bizarre soul-mate of the 20th century (and, what a long, long century that was) that slick-haired roué David Gest.

What a moment: Jackson and Taylor, hand-in-hand, Jackson dressed like June Allison in drag, Taylor with a tiny, black, veiled hat of the type that chic chimps might wear, tipped dangerously on the top of her head.

This is what one expects from a book called Elizabeth and Michael, especially one subtitled A Love Story: A Mondo Cane sort of thing at best, a throw-back to one of E’s True Hollywood Stories at worst. But one wants to see them throwing diamonds at each other and exchanging moments in which each of them sits in the other’s lap to play ventriloquist and dummy.

One wants sumptuous illustrations showing her violet eyes and his full range of Student Prince epaulettes, medals, and golden cords. One wants vivid, even turgid prose that together recall halcyon days, better days when the love match of the day just made no sense at all. And, above, all, one wants some sort of insight into the two, and some sort of expectation.

But we get none of it. In Elizabeth and Michael: The Queen of Hollywood and The King of Pop—A Love Story, we get an endless biography of Elizabeth Taylor—one containing not a single shred of new material—interwoven with an albeit-shorter but no less dull recounting of the full life of Michael Jackson, to which a very short assessment of their mutual love and friendship is attached.

How can it be that, in a book some 400 pages long, it is not until page 199 that the reader—after standing witness to Elizabeth Taylor’s wedding to singer Eddie Fisher, following the sudden death of her previous husband, Mike Todd, an event that sent her into such a tailspin of grief that the only comfort she could find was in the arms of Fisher, despite the fact that he was, at that time, married to America’s Sweetheart Debbie Reynolds, the mother of his two children, Todd, and Prince Leia herself, Carrie Fisher—comes upon this:

“During that time, and most notably on August 29, 1958, Elizabeth Taylor, come hell or high water, was embracing life, refusing to shy away from her thirst for more to come, an integral part of her later life was just beginning. On that in Gary, Indiana, the couple Joseph and Katherine Jackson welcomed into their lives their seventh of nine children, a boy named Michael.”

And, of course, the two don’t actually meet until 1984, pages later, after the time in which the love of Taylor’s life, Richard Burton, had come into her life, loved her, married her (goodbye, Eddie Fisher), twice, divorced her, married another woman, and died, causing our author to recount:

“Because she believed her appearance might turn the solemn occasion into a media circus, Taylor did not attend his funeral out of respect for his widow. Afterward, she privately visited his grave. Cameras, however, snapped the grief-stricken Taylor standing by the gravesite.”

“Like everyone else, Michael was aware of this new sadness and tragedy in her life. When he learned, however, that she was back at her home in Los Angeles—at the same time he was winding up the Victory tour, which was scheduled to play Dodger Stadium at the end of November and the first two weeks in December—he sent word that he’d provide tickets to his concert, a many as she wanted for herself and her party. By one count, it was 15 seats; by another it was 30.

“That night, as he performed, he was on pins and needles just at the thought that she was watching him. From his perspective, however, the evening ended disastrously. She had left the stadium midway during his performance.

“’I went to a concert and couldn’t see a thing. I was way up.’ Elizabeth recalled, ‘in a stadium.’ Actually, she was seated in a special glass-enclosed VIP section that apparently didn’t give the best sight lines. ‘I couldn’t see a thing and I brought thirty people, and we couldn’t even hear. So we went home to watch it on television by disc.

“’Michael heard that I had left halfway through and called me the next day and was like in tears ’cause he’d heard I had walked out,’ Taylor said. ‘I hadn’t walked out. I just couldn’t see anything. And then we talked on the phone for about three hours. From there on in, we talked more and more on the phone.”

So much for meet-cute.

The first is that the actual writing of the book never rises, in terms of language and its more vibrant usage, above the verbiage at its most prosaic, especially given the splendid nature of its dual subjects. It describes the two peacocks in black and white when Technicolor is so clearly called for.

And the second is that the research involved in writing the book seems to have been comprised of reading any number of already published biographies of the author’s two subjects. And so, what might have been a gloriously pop-culture inquiry of the intertwining of these two impossibly famous lives is instead a rather tired recap, one that offers no new thoughts and nothing in the way of the those juicy anecdotes that the reader was yearning for.

And the conclusions we are left with? Well, there’s this:

“They had met at just the right time, as if their meeting had been decreed by destiny.”

And that is not good enough by half.

Bogle’s dutiful retelling of the lives of Elizabeth Taylor and Michael Jackson, both the moments lived singly and jointly, takes its responsibility seriously enough: It takes us through their lives from first to last, casting what spotlights it has on the moments that they spent in public together. But it misses the mark in delivering something more: an artful portrait of two strange souls who found solace in each other.