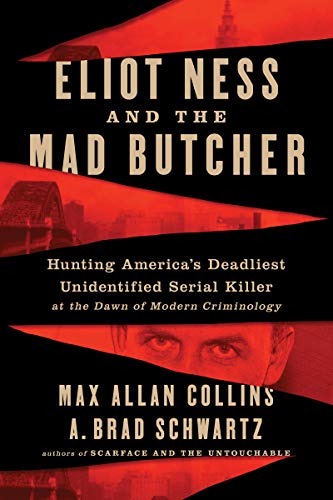 “Eliot Ness and The Mad Butcher is an excellent biography that reads like a thriller and stands on its own, distinct from its predecessor.”

Max Allan Collins is a well-known, accomplished storyteller. He’s written everything from graphic novels and comic books to novelizations of such movies as Air Force One, Saving Private Ryan, and The Mummy, plus novels and comic strip collections starring Dick Tracy. His original fiction includes the Nathan Heller detective fiction series, which features a historical angle in each novel, and many, many other titles.

One historical figure who consistently crops up in his stories is Eliot Ness, one of the more famous American law enforcement celebrities of the 20th century. Collins’ fascination with the quintessential G-man led him to write a spin-off series of four Ness-centered novels between 1987 to 1993 as well as cameos in numerous other tales.

It was a natural development, then, that when Collins met A. Brad Schwartz, a Dick Tracy and Eliot Ness fan, at a signing event several years ago, the friendship that grew between them would lead to a collaboration on an Eliot Ness biography. The result was Scarface and the Untouchable: Al Capone, Eliot Ness, and the Battle for Chicago (2018).

Exploring the reign of terror of Al Capone, Public Enemy Number One, and the intrepid Prohibition agent who worked so hard to bring him to justice, Scarface and the Untouchable ended up telling only a part of the fascinating story of Eliot Ness.

Using the rest of their extensive research material, Collins and Schwartz now bring us Eliot Ness and the Mad Butcher: Hunting America’s Deadliest Unidentified Serial Killer at the Dawn of Modern Criminology, the second part of the famous lawman’s life story.

Focusing on Ness’ career after leaving Chicago once Prohibition was repealed in 1933, the authors examine his arrival in Cleveland in 1934 and his appointment by the mayor to the position of Safety Director, with responsibility for the Cleveland Police Department.

Confronting a city mired in crime and corruption, Ness devoted the next seven years of his life to a war on gambling, youth crime, illegal liquor production, and police corruption. He led raids on nightclubs, broke up stills, and engineered the arrests or dismissals of bent cops.

The public (and most of the newspapers of the day) loved him for it. The fearless and cool-headed former G-man almost single-handedly seemed to put their city back on its feet, creating an atmosphere in which kids could look up to law enforcement officers rather than run from them, and businesses could invest in Cleveland without fear of corruption or worse.

The fly in the ointment proved to be a series of grotesque homicides that haunted the city throughout Ness’ tenure. The so-called torso murders baffled police, and while Ness ran a secret squad that tracked down leads and ultimately focused on a particular subject they believed was the killer dubbed the Mad Butcher, they were never able to produce the evidence that would result in an arrest and prosecution. Although the murders eventually stopped, their suspect was never brought to justice.

Collins and Schwartz have organized their story into alternating threads. One follows Ness’s advancements in police reform and crime fighting as he cleans up the city, while the other documents each new discovery of body parts and the struggle not only to find the killer but to put a name to each victim. The case was so baffling, in fact, that only two of the Butcher’s victims would ever be identified.

It’s a difficult way to narrate a biography, and readers will feel the struggle between trying to tell a gripping murder mystery on the one hand and documenting the various achievements during Ness’s run as Safety Director on the other hand. The storylines eventually get somewhat tangled up as satisfactory conclusions become fewer and farther between.

The other challenge faced by the authors lies in the fact that Ness’ latter years were spent in a long slide into meaningless work, failed business ventures, divorce, an odd second marriage, and alcoholism. As a result, the story understandably loses its momentum and becomes tedious and rather depressing toward the end. Not much that biographers can do about that, though. Many of us struggle on the long road into darkness, and Ness was no exception.

Nevertheless, Eliot Ness and The Mad Butcher is an excellent biography that reads like a thriller and stands on its own, distinct from its predecessor, Scarface and the Untouchable. It’s a very welcome look at the actual achievements of this remarkable man, separate from the Dick Tracy-like legend, and it’s a worthwhile, entertaining reading experience.