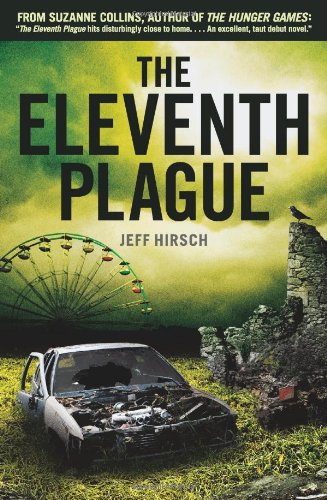 The Eleventh Plague is Jeff Hirsh’s debut novel. It’s a dystopian YA saga about 15-year-old Stephen Quinn. He’s growing up in a new America—what the country has become after a devastating war with China. A virulent stain of the flu—the eleventh plague, wipes out two thirds of the country. Now, the survivors have to forge a new path and make their way in the new world, a world that can be desolate, cold, and brutal.

Stephen, his father, and his grandfather all scrape by as salvagers, but when the grandfather dies, Stephen’s dad decides to free himself from granddad’s ironclad influence. It’s a risk he’s willing to take—and the consequences change his life and Stephen’s beyond anything they could have imagined.

We’ve all heard the old cliché “don’t judge a book by its cover,” but the cover of The Eleventh Plague immediately captures one’s attention. It’s atmospheric and connotes a world gone wrong, very wrong. It begs to be opened, the contents within it, explored.

Right in the opening pages, the writing strikes the reader as stark and direct, almost sparse. There is a blunt sensibility to the characters that made me question if they would be likable. Would these be characters a kid or I could relate to? The answer is a resounding yes.

The author draws us in alongside Stephen as he takes this perilous journey. You are there sharing the emptiness, fear, dread, surprise, the new discoveries and yes, the hope. It is a (supposed) fact that many boys are reluctant readers. The Eleventh Plague may be one of the answers to that problem. It’s a young adult novel, but it also has a middle-grade sensibility that is sure to captivate younger readers as well.

This is a standalone novel, but the premise and ending certainly leave room for a continuation if the author wished to pursue it. His next work—whatever that may be—will land squarely on my get-this-and-read-it-now list.