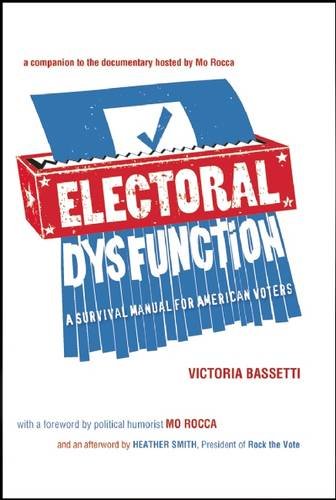 Electoral Dysfunction begins with a question at once puzzling and thought provoking: Which of the following countries does not guarantee its citizens the right to vote: a) Iran, b) Libya, c) The United States, or d) All of the above. Your final answer is?

If you chose “All of the above,” you are right.

With this question and many other interesting highlights, television journalist Mo Rocca introduces the reader to Electoral Dysfunction, Victoria Bassetti’s work regarding our electoral system and all of its foibles. The book is a companion to a PBS documentary on the same subject.

With regard to the question above, this constitutional omission goes back to the birth of our nation, when a fragile democracy was finding its sea legs. It was not until 1825 that all but three states instituted universal suffrage for white males.

Three seminal events followed: the enfranchisement of black males following the civil war; women’s suffrage in 1920, and the Civil Rights Movement of the 1960s. The author illustrates the necessary battles and the politically pragmatic reasons for both the delays and the final ratification of each change. Clearly, votes equal power.

Following black male enfranchisement, states rushed to impose poll taxes and literacy requirements as a way of curtailing voter participation. Women’s suffrage was achieved after a long battle, but was ultimately granted because legislators felt the women’s vote would not influence the outcome.

The Civil Rights battles of the 1960s and 70s ushered in a close to an epoch, but did not put an end to the red tape. Some voters or potential voters are still caught in mazes of byzantine regulations and unfamiliar laws.

Sadly, once we have the right to vote, many of us fail to exercise the privilege. Ms. Bassetti provides a somewhat rambling statistical analysis of voting patterns. (Look for a groundswell of low-turnout statistics following presidential elections.)

This country ranks 139th out of 172 countries analyzed on this variable. The biggest problem according to the author is that low voter turnout weakens democracy’s fiber and lessens its ability to thrive. Well said.

Ms. Bassetti’s strength comes through in going beyond the numbers. She illustrates that turnout does not always influence outcome. This applies both to those who are elected and to the laws that are enacted as a result. Good and bad laws result regardless of who occupies the Oval Office or the seats in Congress. She provides examples that speak for themselves.

The Electoral College requires a chapter unto itself. Here, Ms. Basetti shines, providing a clear rationale for its usefulness and the consequences of eliminating it. All candidates enter the race knowing that it is possible to win the popular vote, but lose the election. This happened in five elections. Unfair, you ask? Perhaps.

But without the College, rural states could be left in the dust as candidates focus on large population centers. Other pitfalls include the rise of third parties “fueled by intense regional or ideological passions.”

In 1992, for example, Ross Perot captured 19 percent of the vote. Such divisions could create the need for a runoff election, for which we are unprepared fiscally or administratively.

The author further illustrates her premise in Electoral Dysfunction with numerous examples of botched elections, reruns and recounts. The 2000 election stands out. She paints a grim picture, but also points to three laws which have begun to turn the tide: The Help America Vote Act in 2002, The National Voter Registration Act in 1992, and the Voting Rights Act of 1965.

Ms. Bassetti offers a convincing argument. For those who have been turned away and/or lost their right to vote because of shoddy records or vague laws, we owe the pledge to continue reform efforts.

With the November 2012 elections looming and the 2000 elections still smarting in the memories of many, this is no time to relax vigilance.