Eleanor and Hick: The Love Affair That Shaped a First Lady 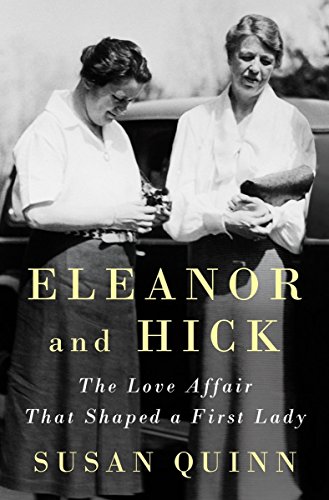 Susan Quinn’s new book addresses a facet of Eleanor Roosevelt’s life that has been hinted at but never fully developed. Quinn’s book, based in part on research involving thousands of letters exchanged between Roosevelt and Lorena Hickok, provides readers with an intimate look at what many believe is a controversial topic. The result is a fascinating read.

Eleanor Roosevelt is renowned as the first presidential spouse to develop her own identity independent of her husband. Franklin Delano Roosevelt was a powerful presence yet his wife, Eleanor, pursued her own interests in a way that had never been seen before.

Eleanor came from the Teddy Roosevelt branch of the family. Throughout her life, Eleanor promoted a variety of political and social causes. Her activism did not start with FDR’s election to the presidency. Quinn reveals that she was a reluctant political spouse because that role usually relegated the woman to a subordinate role. Still, she supported her husband’s career that propelled him into the White House for an unprecedented four terms. During her time living in the presidential fish bowl, Eleanor influenced numerous New Deal programs, including some that faced initial opposition from her husband and his advisors.

Quinn’s book presents a well-rounded account of Roosevelt’s time in the White House and the friendships she developed with a variety of strong, opinionated women, including Lorena Hickok.

Many people may be unfamiliar with Lorena Hickok and her friendship with Eleanor Roosevelt. Quinn’s book provides an introduction and insight into these remarkable women and their intense and, at times, convoluted relationship.

When they met, Hickok was a well-respected reporter for the Associate Press. Quinn takes the time to introduce the reader to Hickok’s less-than-pleasant childhood and presents her as a quick-witted yet vulnerable woman.

Hickok exerted considerable influence over Eleanor’s development as First Lady. This included encouraging Eleanor to hold press conferences for the women journalists who were covering her. That was a novel concept for a First Lady and it met with considerable criticism—most of it from men who disliked opinionated women. Fortunately, Eleanor Roosevelt was a formidable force and not dissuaded from taking the heat.

As their friendship grew, it became apparent that Hick could no longer continue in her role as a journalist. Hick had access to Eleanor that was not enjoyed by other journalists. She would not write the type of in-depth articles her profession (and editors) required because it would compromise her relationship with Eleanor. There was a level of trust between the women that both treasured. At Eleanor’s invitation, Hick lived at the White House during most of FDR’s tenure.

Quinn’s book leaves no doubt that Lorena Hickok was a lesbian. She was involved in intimate relationships with several women during her lifetime. Based on the letters exchanged between Eleanor Roosevelt and Hick, it is also apparent that she was in love with the First Lady.

However, while Quinn includes the text of many letters between them, it is not as apparent that Roosevelt’s obvious affection for Hick reached the same level of intensity. They traveled together, without an entourage, throughout the country. And the relationship with Hick was the source of controversy with Eleanor’s other friends, specifically Nancy Cook and Marion Dickerman. Eleanor co-owned Val-Kill Industries with them. Cook and Dickerman considered Hickok unsophisticated and uncouth and did not understand the attraction.

Eleanor spent considerable time in her youth surrounded by women. As an adult, she had many friends who were lesbians and in committed relationships. These friendships often created tension because of Eleanor’s relationship with Hick. The others, who had a comparable social standing as Eleanor, found Hick did not fit in. Their low opinion of Hick at times interfered with her relationship with Eleanor. Eleanor, on the other hand, seemed to have taken the underlying current of resentment amongst her friends with something akin to denial.

The irony is that Hick encouraged Eleanor to become more independent and to develop her own “voice.” As Eleanor grew into her role as First Lady and a public figure, she became less enamored with many of her friends. Her relationships with some of her oldest friends, including Nan Cook and Marion Dickerman, became strained and ultimately snapped.

Even with the advances made by the LGBT community, many people are uncomfortable with the idea that a former First Lady, especially one as prominent as Eleanor Roosevelt, could have been a lesbian. Quinn quotes Eleanor’s grandson as saying he doubted there was more than cuddling and kisses between the two women. He based the opinion on his grandmother’s penchant for avoiding physical contact with her family, including her children.

Quinn’s book gives an insight into the workings of FDR’s White House, his personal and intimate relationship with women other than his wife. FDR’s extramarital dalliances are well known. The media never photographed or discussed FDR’s use of a wheelchair, and they also ignored his womanizing.

One of the most fascinating aspects of this book is how it lifts the curtain behind FDR’s presidency. This results from Hickok’s official reports to Harry Hopkins about the impact the Depression was having on people around the county. It also helps that Hickok made personal reports to Eleanor that included stories that were not part of the official record.

Eleanor, in turn, used Hick’s insights and observations in her daily newspaper column. FDR also found use for Hick’s stories and colorful details when he needed to convince the public and political leaders of the need for his New Deal programs.

Much has been written about FDR’s time in the White House. Quinn’s book gives readers a more personal and intimate look. Lorena Hickok spent 13 years living in the White House. Eleanor initially insisted on it because she wanted Hick close at hand. That allowed Hick to have a courtside seat to what happened. Yet she never wrote publicly about what she saw or learned during that time. She valued her relationship with Eleanor and, in doing so, subordinated her journalistic instincts. And being a savvy newshound, Hick knew what she was giving up.

Hick paid dearly for her relationship with Eleanor. She relinquished a career she loved and never earned enough money to provide for herself as she aged. In time, Eleanor grew tired of Hick, and they drifted apart. While they remained friends, the intimacy of the early years waned, and Eleanor relegated Hick to the status of a good friend.

The book does not appeal to one’s prurient interest. Nor does it wallow in a pit of lascivious slathering. One happens to be the First Lady, the other a journalist. It is a love story set amid some of the most exciting times in U.S. history. Quinn writes of a relationship between two women that turns this story into a page-turner.