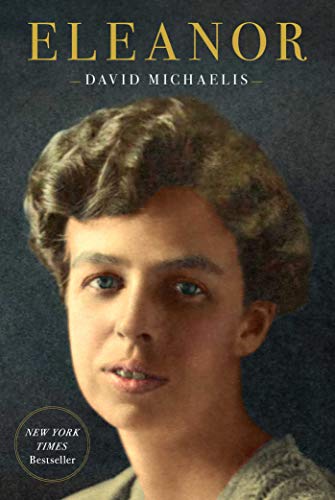 “Few other books reveal the fascinating inner journey that transformed Eleanor from an emotionally choked-off young woman into a mature leader who inspired millions.”

One day as a teenager growing up in Jackson Heights, Queens, I stood in an excited crowd waving at Eleanor Roosevelt (1884–1962) as she rode by in a motorcade down 82nd Street, a main thoroughfare. This was in the 1950s, several years before her death. By then, “American schoolchildren thought of her as a living saint,” writes David Michaelis, author of Eleanor. I still do.

I knew little then about her privileged childhood, her marriage to the man who would become President Franklin D. Roosevelt, or their partnership during the Depression and war years. Nor about the male and female intimates in her life. For me and many others my age, she was a great advocate for the poor, the unfortunate, and the mistreated. Says Michaelis, “She was the world’s foremost champion of human rights.”

In this sympathetic portrait, the author gives us the full story of Eleanor at each evolving stage of her life. Her growth was remarkable. Her early years in a prominent New York family were comfortable, but offered little emotional sustenance.  She was a plain child. Her uncaring mother called her “Granny.” Her father, an alcoholic, was in and out of rehabs. Eleanor adored him. She “found bliss dancing for her father and receiving his unfettered adoration in return,” writes the author.

To remove her from the erratic orbit of the man who meant most to her, she was sent away to a convent.

“Eleanor, I hardly know what’s to happen to you,” her mother was supposed to have said. “You’re so plain that you really have nothing to do except to be good.”

Raised by her grandmother after the early deaths of her parents, she was a fearful, anxious teenager, always a people-pleaser. While away at school in France, she gained some confidence, and returned home to plunge into settlement work, determined to do something more than please. Her eyes began to open, and she pointed the way for others: After visiting a New York tenement family with her, Franklin said, “My God, I didn’t know people lived like that.”

Gradually, Eleanor outgrew the conventions and prejudices of her blue blood family, transcending their “condescension and social restrictions,” in the words of one friend, a state trooper, who introduced her to “prole joys—guns, cars, tourist cars, vernacular speech.” With him she could relax and smile, writes Michaelis.

Franklin, her husband, was a different matter. Life partners, but not emotional intimates, each pursued love affairs—he with social secretary Lucy Mercer, she with AP reporter Lorena Hickok.

Michaelis details innumerable stories of people and events in Eleanor’s life, from her years as the increasingly engaged first lady to her roles in Democratic Party politics to her work as a newspaper columnist and speaker after Franklin’s death in 1945. Time and again, she opened herself to different people and experiences that helped shape her life.

Much of Eleanor will be familiar to many readers, but Michaelis’s rendering is especially bright and a pleasure to read. Few other books reveal the fascinating inner journey that transformed Eleanor from an emotionally choked-off young woman into a mature leader who inspired millions.

“You are something so rare,” Jackie Kennedy once told her, “and so good for all women of my age to have to emulate—a great lady.”

Her friend Martha Gellhorn called Eleanor “more than a saint, a saint who took on all the experiences of everyday life, an absolutely unfrightened selfless woman whose heart never went wrong.”

Who would not cheer for such a person in a passing motorcade?