An Elderly Lady Must Not Be Crossed 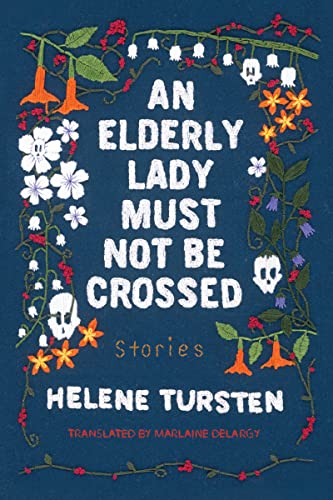 “If you’re looking for distinctive international bouquet in your ‘Scandi noir,’ this isn’t going to fit your collection. Instead, it will be a dandy holiday gift, pocket size, darkly light-hearted, and a quick and easy introduction to the tongue-in-cheek side of one of today’s leading Swedish crime novelists.”

Helene Tursten summons her two established Swedish sleuths from two different series, Irene Huss and Embla Nyström, to tackle the wicked machinations of 88-year-old Maud in An Elderly Lady Must Not Be Crossed, a holiday treat that will make a great stocking stuffer. Maud’s debut appearance in 2018’s An Elderly Lady Is Up to No Good demonstrated that a stack of cleverly twisted short stories can comprise a delightful book. Tursten’s choice to pit her two detectives against this frankly wicked old lady adds to the dark humor of her newest tales.

For Maud, the pressure applied by the two police investigators as a team is the last straw: She’s successfully gotten away with murder in her own home, but it’s taken quite a lot of scheming and arranging, and she’d like a break. Why not treat herself to a luxury trip to South Africa, be wined and dined, see amazing wildlife—all while disguising her cleverness under the deceptive appearance of aging into confusion? People do so much work for you if you appear to be frail and needy, don’t they?

After the first tale, “An Elderly Lady Begins to Remember Her Past,” these dryly funny and dark stories form a mostly chronological sequence—starting with Maud as a child, caretaker of an 11-years-older sister with increasingly odd habits. Not that Maud herself is particularly normal! As she reflects during her flight to Africa, “Memories rise to the surface. That’s what happens when you get older.” We find the grim smiles of “little Maud” executing a trap for bullies; we also find her smiling as she rehearses her father’s fishing methods while making sure a competitive colleague will have a terrible accident.

“No point in brooding over the past,” Maud reassures herself. “Sometimes a person had to do certain things in order to survive the hard life of a single woman with a heavy responsibility to bear.”

In delightfully creepy steps, Maud develops her murderous personality through this set of six revelatory narratives. And if the ending is perhaps a little more sweet than an aging Maud has led us to anticipate, don’t neglect the pair of cookie recipes at the end of An Elderly Lady Must Not Be Crossed. Innocent and sweet as they appear, one of them has been a murder weapon in Maud’s hands. But only, of course, because she was forced to use it!

Marlaine Delargy’s translation never gets in the way of the action in Tursten’s stories. On the other hand, it has little Swedish flavor to it, so if you’re looking for distinctive international bouquet in your “Scandi noir,” this isn’t going to fit your collection. Instead, it will be a dandy holiday gift, pocket size, darkly light-hearted, and a quick and easy introduction to the tongue-in-cheek side of one of today’s leading Swedish crime novelists.