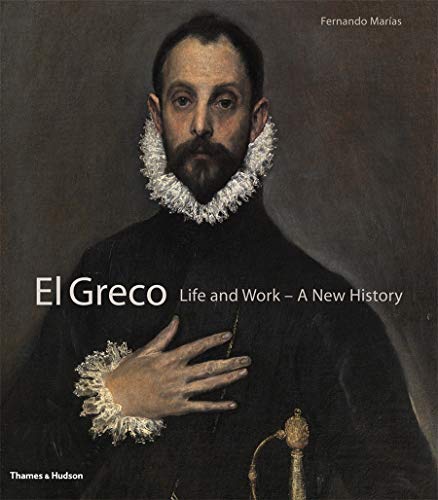 Art history in the Golden Age is not the exclusive domain of Michelangelo’s Italy or Bruegel’s Netherlands. Other countries in Europe also produced prominent artists during that era. Domenikos Theotokopulos, aka. El Greco, (1541–1614) was one such non-Italian, non-Netherlands Golden Age painter, hailing from Greece, cutting through Italy, and laying claim to Spain.

In El Greco: Life and Work—A New History, Marías explains why El Greco history to date is complex and incomplete. With new documents surfacing in recent years, a reconsideration of El Greco’s personality, experiences, and lifestyle are in order. With the heart of an investigative reporter, Marías revisits the specifics of recorded exchanges in which El Greco was involved. He retraces and reinterprets these to create a revised impression of El Greco—the painter, the businessman, and the family man.

There is some debate about the validity of the new documents. The writings in the very hand of El Greco seem to prove nothing to some, yet everything to others. An age old dilemma is alive and well in this book: how to create a picture of a person, an accurate presentation of their biography, by piecing together bits of many divergent puzzles?

With limited first-hand evidence, the story of El Greco’s life is primarily one of conjecture. No matter who is writing the history, the best that can be created is inference. To learn about El Greco and his life, one can look at the notes and documents that survive from the dates and places in which El Greco lived. Presumptions can then be made that El Greco, too, must have had much the same experiences. Marías has assimilated this sort of case-building technique.

Most painters would have followed a certain path toward artistic mastery. But there is no evidence that El Greco followed the typical paths in place in the 1550s, therefore, the conclusion is made that he somehow forged his own path. In this case, what were the options available to him? Aristocratic sponsorship? Official painter in the Catholic churches? Workshop entrepreneur? El Greco meandered a winding route through all these options burning bridge after bridge along his way.

Time after time Marías offers intimately detailed descriptions of the happenings of the people around El Greco, but then says that while these things may be true for others, there is no proof that they were what was actually happening to El Greco. He tells about situations of people who happened to be documented, then he attempts to extrapolate a scenario that might also fit El Greco, but admits blatantly that he really has no idea what El Greco was up to. This is useful to a point, painting a particular picture of the society and culture that existed, but past that, it’s still only fiction.

The frustrating thing about this book is that the tangential “evidence gathering” portions intending to assemble the cases of these other individuals are difficult to read. They are renditions of a law school textbook, lists of unfamiliar and uncommon names, or details from accounts receivable ledgers. Fact-and-figure oriented historians may well appreciate Marías’ patience with the minutia of this material.

When he touches on what is known about El Greco, and elaborates on the artwork and the symbolisms therein, Marías’ writing is a breeze to absorb. Would that there were more of this type of discussion in this hefty volume! The balance alternates evenly between the clunky technicalities of Marías the historian and the gifted eloquence of Marías the writer.

The knockout hits here are the reproductions of the artwork. Undeniably outstanding images fill the pages. If these pictures (213 of them, to be precise, with 186 in color) are so truly remarkable in this reduced facsimile format, one can only imagine how powerful these works must be in person, in situ. Great efforts were taken to provide a representation of El Greco’s complete oeuvre. The reader can easily track his growth as his style developed during his migrations from Greece to Italy to Spain. That certain “something” that is El Greco does indeed surface over time into a palpable identifiable attitude that he ingeniously incorporated into various client requirements.

How did El Greco view himself? Art? Society? Business? Life? Misanthropic might just be the most descriptive term. He did what he had to do to get by, made a right mess of nearly everything he touched, yet kept to his spirits in his painting. For better or for worse, El Greco was all he could be: himself.

Five hundred years later, we are grateful he did this or we would have just another unknown icon painter and not a Golden Age visionary to admire and wonder about. How he transformed from one (Domenikos the icon painter) to the other (El Greco the visionary), even with Marías’ El Greco: Life and Work—A New History, will continue to remain a mystery.