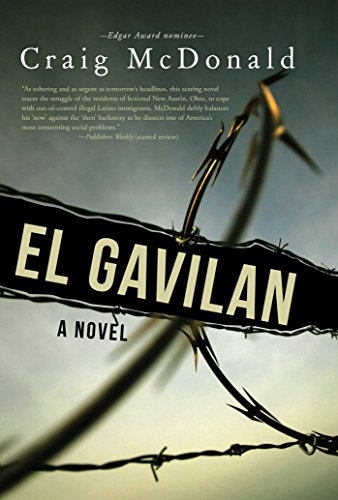 “Craig McDonald uses his skills to write a drama that demands the reader pay attention, if a character has a Latino or Anglo name, the reader can’t make assumptions about where the character’s sympathies lie. His descriptions of the town and the characters are that vivid.”

There is a crime in El Gavilan, but it becomes eclipsed by the shifting alliances of the people trying to solve it.

Tell Lyons is the new Chief of Police in New Austin, Ohio. His law enforcement past is as a border control agent, but because his wife and child died as a result of that work, his view of the world is tinted. Note to Chief: On your first night in town, maybe not the best idea to quickly down a couple of margaritas.

But he is not the title character; El Gavilan (the hawk) is the nickname of Sheriff Able Hawk, who has rigid views on those who commit crimes on his patch in Ohio, both legal and illegal immigrants. He has used 9/11 funds to put up billboards reminding citizens that hiring illegal immigrants or those with false identification is a federal crime! It’s the law!”

The immigration issue is like a Macy’s Thanksgiving Day balloon. The issue rises during political campaigns and then deflates for those who think they are not directly affected by it.

In this story, there is a wide spectrum of viewpoints, and refreshingly, Latinos, like every other ethnic group in our country, are shown in all their diversity. Some are legal immigrants who feel no sympathy for their illegal brethren—they should enter the country the way they did, legally. In fact, some legal immigrants are actively hostile to illegals because they feel all Latinos are tarred with the illegal brush.

Craig McDonald uses his skills to write a drama that demands the reader pay attention, if a character has a Latino or Anglo name, the reader can’t make assumptions about where the character’s sympathies lie. His descriptions of the town and the characters are that vivid.

The first time we meet Hawk:

“The old Mexican saw an expanse of grayness in Able: gray hair, at least what Luis could see under the sheriff’s gray Stetson; gray walrus mustache and penetrating gray eyes. Able wore a dark grey uniform. The sheriff’s tunic strained against his swollen gut.”

Such care is not only in physical descriptions, when Mr. McDonald introduces Shawn O’Hara, who refuses to call his girlfriend Patricia, her proper name despite her continually reminding him, the reader is not surprised when she breaks up with him a few pages later. Sean is surprised, which doesn’t say much for his skills of observation, especially since he is a reporter.

Although they are in law enforcement, Hawk and Lyons both believe that justice delayed is justice denied, taking quite a bit of power into their hands. Is that comforting to the people who live in this jurisdiction? Do they know best? If people broke laws to get into this country, are they forced to condone other illegal acts?

If Mr. McDonald has done his job, the reader closes the book with more questions that when they started.