Einstein's God: Conversations About Science and the Human Spirit 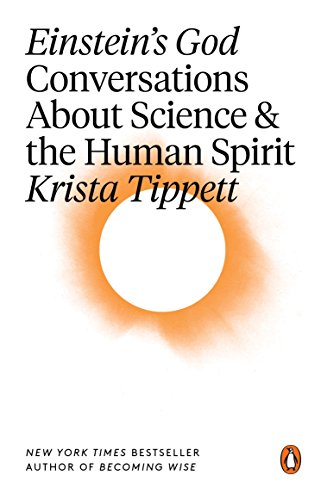 Krista Tippett has spent the past decade interviewing people about religion and spiritual ethics as the host of public radio’s “Speaking of Faith.” Einstein’s God is an edited selection from these interviews in which she discusses the relationship between science and religion with a number of eminent guests: some scientists, some not, some believers, some atheists—all of them leaders in their fields with interesting ideas. It’s an eclectic group of guests, and the conversations cover a very broad range of topics, including Darwin’s relationship to religion, the psychological basis of forgiveness and vengeance, and how God might have room to act within the constraints of modern physics.

Unlike most of what appears in print these days about religion’s interactions with science, Tippett’s book is not about conflict. It is about reconciling the two world-views. Its intentions are to show that scientists—even ones that have no religious belief— feel the same sense of awe and wonder at the world as believers, that even the devoutly religious can and should respect the study of the natural world, and that scientists themselves can be practicing believers and feel no contradiction within themselves.

Tippett is attempting in this book what, for many people on both sides of the religion vs. science “debate,” must seem impossible. She is speaking candidly and respectfully to scientists, theologians, and artists about their spirituality and beliefs, seeking to find the common ground between these extremely different world-views. In the process, whether you feel she succeeds or not, she achieves something just as helpful: She finds the common humanity in all these seekers, and gives us a basis for mutual respect and a sense of fellowship.

Within this framework, some of the interviews work better than others. The first interviewee in the book is the main reason I wanted to read it, physicist Freeman Dyson discussing Einstein’s spirituality. Yet the conversation was dry, if not dull. It covered ground that would be well known to anyone interested in Einstein. The only point of real interest it made was the idea that the feeling Einstein had about the Universe and how it is put together, about the “miraculous” way mathematics is able to describe nature (there being no reason anybody knows why it should), is very close to the religious sense that believers have when they contemplate Creation.

Unfortunately, this interview and the one that follows it with physicist Paul Davies, may have been recorded too early for either Dyson or Davies to be aware of a letter on religion that Einstein wrote to the philosopher Eric Gutkind in 1954, which became well known only in 2008. In the letter he clearly denies any belief in God—not just the “personal God” he famously rejected— saying, “The word god is for me nothing more than the expression and product of human weaknesses, the Bible a collection of honorable, but still primitive legends, which are nevertheless pretty childish.” Tippett should have known about this letter and, I think, addressed the complexity it adds to Einstein’s expressed views on religion.

Once we leave Dyson behind, the interviews become more lively and engaging. Also, after the initial discussion about Einstein, the collection moves away from him, specifically, and goes off to explore the interplay between science and religion in other disciplines and through other thinkers. Sherwin Nuland, a surgeon, talks about his notion that human spirituality and religious feeling, human good and evil themselves, are the products of an evolutionary process that has selected and nurtured them. Tippett’s comment that such ideas “might richly inform many religious perspectives” is typical of the hopeful and inclusive attitude she projects throughout the book. Whatever we might think of the likelihood of this happening, it is impossible not to wish with her that it could be so.

High spots for me were the chat with Jana Levin, another world-class physicist, who talked about her novel, A Madman Dreams of Turing Machines, and about a rationalist world-view that is nevertheless filled with wonder and beauty. Psychologist Michael McCullogh talked about the evolution of forgiveness and its central, everyday role in preserving civilisation. Charles Darwin’s biographer, James Moore, was eloquent in describing the deep reverence of the Great Man for the natural world “undefaced by the hand of man.” And Esther Sternberg, a Canadian immunologist I had not encountered before, was fascinating on the complex connection between health and emotion.

Low spots included Anglican Priest (and one-time physicist) John Polkinghorne who, while decrying “God of the gap” arguments, proceeded to describe a Universe where God excludes himself from all but the most marginal influence through quantum uncertainty and chaotic processes. Polkinghorne appears to be a favorite of Tippett’s, judging by the number of times she mentions him in the book, yet I found his message that God created a self-creating Universe (i.e. He set up the initial rules and conditions but then lets it run more-or-less untended) far less intellectually satisfying (or even honest) than that expressed by V. V. Raman in another interview. Raman, a Hindu, seems able to keep his religious and scientific world-views completely separate and to experience the world in these two, quite different ways without feeling the need to find ways of fitting them together. I also found that the format of the book—essentially a series of transcripts with an overall introduction, introductory remarks before each interview, and break-out comments within (generally to give background to what is being discussed)—was rather tedious and involved a lot of repetition.

Einstein’s God swings between fascinating and infuriating with only a little dull in between. It would almost be impossible for it to do anything else with such interesting and controversial contributors involved. Tippett has attempted to move us away from the often hostile and sterile debate between science and religion, and instead demonstrate how, in the ordinary world of people’s lives, scientists and theologians are asking the same questions of and feeling the same wonder at the world they inhabit, without conflict, and with great humility and respect for the truth. And I think she has made a good job of it. However, her eclectic and inclusive approach may have worked against her to some extent. Suggesting, by their inclusion, that all religions are somehow equivalent and the content of their doctrines does not really matter, reduces them to the status of a mystical or spiritual impulse, whereby they can, indeed, be compared to Einstein’s “religious sense” of the Universe. It’s possible that some believers will be offended by this. But in the end, perhaps Tippett’s point is that it is the urge toward spirituality that is really important for most of us, and whether we satisfy it through scientific study or through religious devotion matters very little.