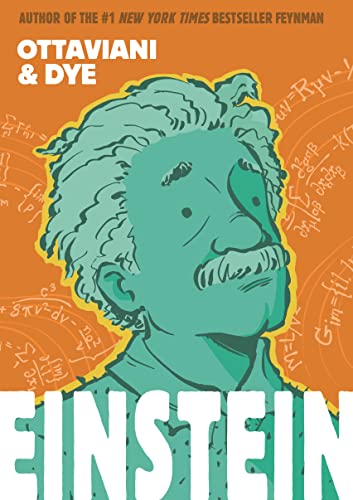 “The graphic novel format will be enough incentive to get readers interested in physics.”

Jim Ottaviani and Jerel Dye use the graphic novel format to make Einstein accessible, both as a man and as thinker, but the end result is too uneven to work as a cohesive narrative. Much attention is paid to Einstein’s affairs and bad marriages, but little is given to the effect of Hitler’s Germany on his professional and personal life. There are German scientists labeled as Nazis (Philip Lenard and Johannes Stark), but the depth and influence of their vitriol is never presented. These Nobel Prize-winning physicists didn’t just excoriate Einstein, they loudly condemned all of quantum physics as evidence of corrupt Jewish thinking, in contrast to healthy German physics.

Einstein happened to be working in the United States when Kristallnacht happened and presciently decided never to return to Germany. His property and bank accounts were seized by the Third Reich. Despite all of his many pleas for their return, no German scientists spoke in his favor, including Max Planck, who appears in this graphic version, though this part of Einstein’s story is omitted.

Even more awkward is the almost complete absence of a woman physicist who was Einstein’s contemporary, someone he worked with in Berlin, traveled with, and corresponded with early in his career. There are plenty of physicists introduced, so it may seem silly to complain about skipping this one. But there are several pages recounting the famous story of Einstein’s letter to President Roosevelt, warning of the dangers of Nazi Germany using the new discovery of nuclear fission to create a devastating bomb. This letter became the seeds for the Manhattan Project, the great push for America to figure out how to make this weapon first.

The physicist who discovered nuclear fission was Lise Meitner, Einstein’s Berlin colleague and contemporary, who is mentioned, but not shown, and isn’t given the credit here that Einstein gave her in real life. Before Meitner, the atom had been considered indivisible. Einstein describes in his own writing the momentous nature of her being able to conceive the opposite. And Meitner writes how it was Einstein’s famous E=mc squared equation which allowed her to grasp this scientific truth. Worse, the one mention of Meitner isn’t accurate. It comes as part of the story of how Leo Szilard and Edward Teller brought Einstein the historic letter to sign, warning the American president about the danger of a nuclear weapon.

“And things moved very fast during WWII. When we went to see Einstein on Long Island, fission had already made its way out of Lise Meitner and Otto Hahn’s lab in Germany. Just as Meitner herself had made it out. She was Jewish, you see.”

Meitner had already fled Berlin before the famous discovery, and she hadn’t been allowed in Hahn’s lab for quite some time by then since he was wary of being associated with a Jew. Hahn, a chemist, wrote Meitner a pleading letter, presenting an experiment he saw as a failure since the results made no sense to him in terms of chemistry. Meitner saw the results as a physicist and in a bolt of inspiration, realized the atom had been split.

Another strangely skewed story is the way Heisenberg is portrayed. Yes, he was accused of being a “White Jew,” but that wasn’t because he defended Einstein. Rather it was because he worked in the field of quantum physics, which itself was suspect as a “Jewish depravity.” He was personally cleared by Heinrich Himmler and went on to become an ardent apologist for the Nazis, not the innocent portrayed here:

“So I kept my head down and didn’t say the name [of Einstein]. That way I could do my work, stay in my country.”

These are minor mistakes, but seeing such sloppiness makes one wonder what else has been missed or skewed. Certainly, the general presentation throughout of Einstein as an absent-minded professor feels more caricature than characterization. Contemporary scientists, including Meitner and Max Born, don’t describe Einstein this way at all, though Meitner considered him naive about human nature, giving people more credit for goodness than they deserved.

All this could be dismissed if the science were effectively conveyed. Here is one theory’s presentation:

“When you heat a black body, it radiates in a specific way, and a related problem occurred with Lenard’s experiment. When light hits certain materials, it generates electricity. Add more light and you would expect more photoelectricity.

But if you just shine more light of all colors—a broad spectrum—you don’t get proportionately more electricity. Only certain colors matter.

If we think of the light as pouring down like water, it’s not about the total intensity of water washing over the photoelectric material. It’s more about drops of just the right size hitting it.

It’s as if the wrong chord makes no sound, but one note—one right note—produces a symphony.”

The imagined conversations between Einstein and Newton, each arguing for their own physics, work better, but in much of the book fellow physicists explain Einstein’s work in ways that aren’t particularly effective, as seen in the above quote. As for Einstein’s political views, they’re quickly dispatched in a couple of pages, showing him as a strong advocate for democracy and civil rights, but not mentioning his deeply held pacifism, which was born out of the First World War. All in all, this book doesn’t bring Einstein to life nor clarify his thinking. The reader doesn’t finish it feeling closer to either. Perhaps the graphic novel format will be enough incentive to get readers interested in physics. The book’s bibliography provides a good starting point for more rewarding exploration.