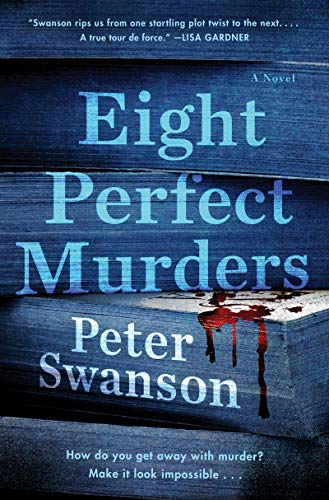 “No matter how well you know someone, you can never fully know what’s in their heart and mind. Eight Perfect Murders proves the point. Which is what makes it perfectly creepy.”

Here are the other six: smooth, quiet, intelligent, twisty, stylish, startling. They all add up to perfectly creepy.

The premise is intriguing: A bookseller, in one of his earlier jobs, posted a blog for mystery lovers in which he listed the most ingenious murders in fiction. Little did he know that years later this list would come back to haunt him. Now a rash of real-life murders proves to be emulating those fictional mysteries—and the killer is trying to draw him in. Indeed, the killer may be saving him for the grand finale.

The bookseller is not the only one to notice similarities to his list. An FBI agent makes the connection and approaches him for information. Thus begins a subtle cat-and-mouse game between the narrator-bookseller, the killer, and the law. In their conversations and maneuvers, they make thought-provoking points about legality, morality, justice, and vengeance.

After a few chapters, you begin to suspect the narrator knows more than he’s telling. He speaks in first-person voice so we think we’re in his head from page one, yet he fails to give details we need to fully understand. He seems at first to be a conventional amateur sleuth digging into a mystery dropped into his lap. But then, things start adding up wrong.

It’s tempting to categorize him as an “unreliable narrator” because of holdbacks and unpredictability. Unlike true unreliable narrators, however, he does parcel out crucial information. It comes at a steady pace, almost matter-of-factly, never too-too late, and in context for that particular point in the story. This layers on a plot that keeps getting deeper and murkier.

Eventually you get nervous at each page-turning. What’s going to come up next? How involved is he, really—or is it all just a mind-bending scam, with a very smart author toying with readers’ heads?

That’s a fair question for readers unfamiliar with the author and the mystery novels involved. Those who have read widely in the genre, especially who know the eight novels listed, will more easily grasp the sense of the story and embrace the puzzle. Readers in general will be divided between those who don’t trust the narrator and those who give him the benefit of the doubt.

The novel works best for lovers of turnabouts. Such surprises don’t seem to stop, and they set up the expectation that the ending can only be a shocking turnabout. Depending on how good you are at clue-spotting, you might find the ending not so surprising. But if you miss the clues, it could be a bombshell.

What finally comes together is plot and character confirming the book’s theme: No matter how well you know someone, you can never fully know what’s in their heart and mind. Eight Perfect Murders proves the point. Which is what makes it perfectly creepy.