Eight Days at Yalta: How Churchill, Roosevelt, and Stalin Shaped the Post-War World 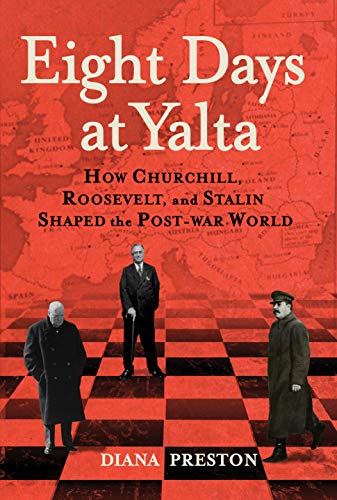 “Preston provides a highly readable, highly detailed account of the historic meetings and often difficult and contentious negotiations between Churchill, Roosevelt, Stalin, and their staffs, and a vivid description of the once ornate Tsarist palaces and their much deteriorated wartime condition that served as the settings for meetings, dinners, and private talks.”

February 2020 marked the 75th anniversary of the Yalta Conference, the now infamous World War II meeting of the “Big Three”—Churchill, Roosevelt, and Stalin—four months before the war in Europe ended and seven months before the war in Asia ended. Its infamy lies in the fact that for many Yalta symbolizes the United States’ and Britain’s knowing and willing acquiescence in the communization of much of central and eastern Europe, and parts of Asia.

Historian Diana Preston begins her new book Eight Days at Yalta by noting that in 2005, President George W. Bush compared the Yalta conference to the 1938 Munich conference where France and Britain consigned the country of Czechoslovakia to Nazi rule in the hope that sacrificing the freedom and liberty of one country would prevent a world war. Bush called Yalta “one of the great wrongs of history.”

Preston’s book is yet another effort to provide a historically balanced view of the Yalta accords, and at this she mostly succeeds. The decisions made by Churchill and Roosevelt during February 4–11, 1945, can only be fairly judged by considering what both leaders knew and did not know at the time, and what alternative options were realistic under the circumstances of that time.

Preston provides a highly readable, highly detailed account of the historic meetings and often difficult and contentious negotiations between Churchill, Roosevelt, Stalin, and their staffs, and a vivid description of the once ornate Tsarist palaces and their much deteriorated wartime condition that served as the settings for meetings, dinners, and private talks.

In substance, Yalta involved the Big Three planning to finish the war in Europe and Asia, as well as seeking to construct a post-war world order. The first factor is often ignored when passing judgments on Churchill and Roosevelt, who acted under constraints imposed by the continuing war effort. Germany was not yet defeated and Japan’s defeat was viewed as even more distant.

Moreover, the facts on the ground could not be ignored. By the time of Yalta, Soviet forces were in control of much of the territory they would politically dominate after the war. Churchill and Roosevelt surely understood that.

The principal issues discussed at Yalta were the final defeat of Germany and its subsequent occupation by Allied powers, joint efforts to defeat Japan and terms and conditions for Soviet help in that effort, the role, if any, of France in the postwar occupation of Germany, German reparations, war crimes trials, repatriation of captured soldiers, the establishment of the United Nations, and the fate of the nations of central and eastern Europe, especially Poland.

Preston notes that the Soviets had several advantages at Yalta. First, there was a consensus that Soviet armies had done the bulk of the ground fighting against Hitler’s armies and that Soviet citizens had suffered far more than the citizens of the other allied nations at the hands of the Nazis. Second, as noted above, Soviet forces already controlled much of central and eastern Europe. Third, due to Roosevelt’s insistence, British and American officials did not present Stalin with shared viewpoints on the issues under discussion. And fourth, Soviet spies that had infiltrated both American and British governments “alert[ed] Soviet authorities to their negotiating tactics and “’red lines,’” and kept Stalin informed about U.S.-British efforts to develop an atomic bomb.

But there was something more fundamental amiss at Yalta that Preston does not mention. Roosevelt had been warned countless times during the war about the nature of communism, Stalin, and likely Soviet postwar goals. Preston fails to mention that key U.S. advisors such as William Bullitt had gone to great lengths to persuade Roosevelt to conduct war strategy in anticipation of a postwar struggle with the Soviet Union. Churchill had sounded similar alarms, but they fell on deaf ears.

Moreover, before and during the war, Roosevelt had been told about Soviet infiltration of his government, but he either disbelieved it or simply failed to do anything about it. FDR had been informed by State Department security officers in 1939 and by the FBI in 1942 about allegations that Alger Hiss was part of a communist cell within the government, yet Hiss was at Yalta in his role as the State Department’s Deputy Director of the Office of Special Political Affairs.

In addition, a member of Roosevelt’s White House staff, Lauchlin Currie, and Roosevelt’s Assistant Secretary of the Treasury Harry Dexter White, though not present at Yalta, were identified as Soviet spies who were well-placed to influence the president’s postwar policies.

Perhaps even more consequential was what the late scholar Robert Nisbet accurately characterized as Roosevelt’s “failed courtship” of Stalin. Roosevelt the democratic political leader believed that he could persuade Stalin the gangster-statesman of a totalitarian empire to view the postwar world like Roosevelt did. This, and FDR’s failure to coordinate negotiating strategy with the British, frustrated Churchill whose hatred of communism extended back to Lenin’s seizure of power in 1917.

Preston notes another important factor that influenced Roosevelt’s approach to Stalin—the U.S. presidential election of 1944. The postwar fate of Poland, Preston implies, may have been determined by FDR’s unwillingness to hold the Yalta meeting until after the November 1944 election.

“With hindsight,” the author writes, “it would have proved more advantageous if the conference had been held when originally proposed in the summer of 1944, rather than being postponed . . . by Roosevelt to Churchill’s consternation until after the US presidential inauguration. The USSR would have been in possession of much less of Eastern Europe and more options might have been open to hasten the Western Allies’ advance.”

Another reason for FDR’s courting of Stalin was the perceived need to get Soviet help in defeating Japan, which Stalin promised to do. On the same day America dropped the second atomic bomb (on Nagasaki), the Soviet Union declared war against Japan and invaded Manchuria and northern Korea, thus setting the stage for the division of Korea into spheres of influence and the subsequent Korean War.

The fate of Poland and other nations of central and eastern Europe was the most contentious issue at Yalta, and when that fate was decided—Soviet promises of free elections and independent but friendly governments, promises which Stalin broke almost immediately—both FDR and Churchill explained to their staffs that it was the best they could do.

It was also decided at Yalta that all captured soldiers would be repatriated to their respective countries. FDR and Churchill understandably wanted to ensure that American and British POWs who fell into Soviet hands would be returned home. In practice, this led to the Anglo-American forcible repatriation of Russians, Ukrainians, and Cossacks to imprisonment in gulags and worse that was memorably documented by Nikolai Tolstoy in his book Victims of Yalta.

When Roosevelt returned from Yalta, he was exhausted and in a very real sense dying—he had less than two months to live. He told Congress that the agreement on Poland was a “compromise,” but that in the end Yalta would put an end to “the system of unilateral action, the exclusive alliances, the spheres of influence, the balances of power.” He was wrong. The “iron curtain” descended across the middle of Europe and a costly Cold War resulted, including the hot wars of Korea and Vietnam.

The last wartime conference was held at Potsdam. Germany had already surrendered. Roosevelt was dead, replaced by Harry Truman. Churchill would learn during the conference that his party had suffered a stunning electoral defeat. Stalin, meanwhile, remained as the supreme ruler of Soviet Russia and its expanding empire.

Preston concludes the book with a brief description of some of the key crises of the early Cold War, including Soviet adventurism in northern Iran, its pressures on Greece, Turkey, and Berlin, and the formation of opposing blocs that divided Europe for 45 years.

At Yalta, Roosevelt, like Woodrow Wilson at the end of World War I, placed more faith in the effectiveness of a world organization to keep peace than in the hard realities of balances of power and spheres of influence. Yalta deserves its infamous reputation.

Though Preston writes that Roosevelt’s idealistic aspirations remain as valid today as they were then, she judges quite reasonably that Yalta “is open to criticism, some of it justified at the time and more of it justified with the complacent benefit of the hindsight of history.”