Eight Days in May: The Final Collapse of the Third Reich 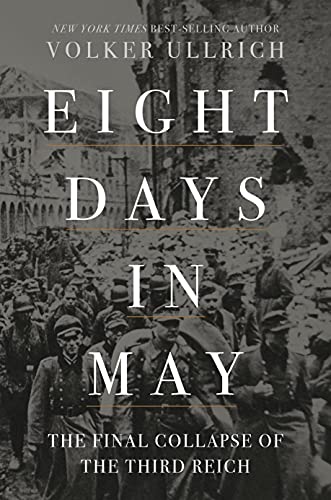 It’s World War II. It’s April 30, 1945. It’s nearly eleven months since D-Day, June 6, 1944. The Allies from the west under the command of General Eisenhower are closing in on German territory. The Russians on the Eastern Front are approaching Berlin. Dachau has been liberated Germany has lost control of its airspace as bombers pummel its cities. The thousand-year Reich is nearly over yet Germany has not yet surrendered. Adolf Hitler and Eva Braun, his wife of one day, commit suicide. What happens next? This is the subject of this compelling book, chronicling the eight days between Hitler’s suicide and the surrender of Germany to the Allies.

Eight Days in May tells the story of what happens to Germany after Hitler realizes he has lost. The book unfolds in eight chapters, each one devoted to a day-by-day discussion of what happens, culminating on May 8, 1945, the day Germany finally unconditionally surrenders to the Allies. It is a story egos and political jostling among the remaining Nazi leadership, but also about denial, anger, bargaining, depression, and acceptance. It is a story of Elizabeth Kübler-Ross’ five stages of grief as Germany collectively comes to the realization it has lost and how now it will prepare itself for surrender and rebuilding.

As Ullrich paints it, Hitler sees the inevitable but refuses to surrender. He takes the cowardly way out and informs his leadership he will commit suicide rather than give up. His final directives tell them that after he and Braun commit suicide they want their bodies burned and buried in a place where no one can find them. They fear a repeat of what happened to Mussolini in Italy where he was shot, and his body hung upside down publicly. Hitler also has to decide on his successor. Will it be Martin Bormann, director of the Nazi Party chancellery? Joseph Goebbels, the chief propagandist? Heinrich Himmler, number two under Hitler? Or Herman Göring, commander of the Luftwaffe? None were deemed as acceptable by Hitler as he questioned their loyalty at the end. Instead, he picks Admiral Karl Dönitz as the successor.

Dönitz has several tasks. One is to negotiate an end to the war. He wants to avoid unconditional surrender, seeking to find terms acceptable to Germany. Two, among the terms he wants is separate surrenders with the United States and the western Allies from that with the Soviet Union. Three, fearing the retribution from Stalin and believing the western Allies will treat him, his soldiers, and his county better, Dönitz wants sufficient time to pull back his troops behind the advancing Red Army, hoping for protection. Four, Dönitz needs to set up a new government without Hitler and distancing itself from the Nazi’s and their atrocities. Five, his government needs to begin the process of restoring and rebuilding Germany.

Over a period of eight days Dönitz struggles with these goals. Internally to Germany there is the selection of his cabinet and leadership team, debate over whether to keep fighting and where, and who to assign to negotiate with the Allies.

Externally there is the posturing with various allied military personnel, including Eisenhower, over the terms of surrender and at least initial refusal to surrender unconditionally, or at least to recognize Germany has no bargaining options.

As these eight days tick off, Germany seeks both to deny it war crimes while also destroying evidence of them, as well debating whether to surrender peacefully and honorably or lay carnage in retribution. Reality and their untenable bargaining position eventually force Dönitz to meet Eisenhower’s demands. But not before further posturing by Germany and the USSR over where and how to surrender. Finally, as the proverbial ink dries on the terms of surrender, many Germans express dismay and denial over what they did, seeing themselves as victims both of Hitler and the Allied invasion.

Eight Days in May reads like a thriller “who dunnit.” As each day unfolds the reader feels the tension and drama as World War II wrenches to a close. The level of detail is fascinating, providing ample grist and satisfaction for World War II history buffs. The book tells a story of what happened after Hitler that few know about. By far, one of the best and unique books on the end of the war in years.