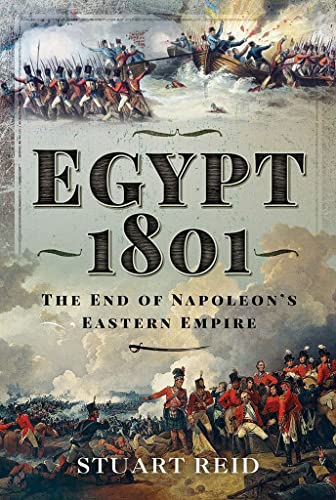 “In Egypt 1801, Reid tells the battles in great detail but with clear, engrossing, and lively prose in the best tradition of the literature of military history.”

Public historical memory remembers Napoleon’s Egyptian campaign (1798–1801) as an impractical, failed project to conquer British India, one of the prologues or brief setbacks in his greater career. Historians now write of it as a plan to establish a French empire in the east, to bring the French Revolution’s values to the Muslim world, and to destroy England by occupying Egypt.

Napoleon had won seemingly impossible successes in France and Italy before the problems of invading Great Britain, he claimed, compelled him to invade Egypt to bring down the British Empire. Reid briefly summarizes Napoleon’s successful campaign against the “despotic” Mamlūk beys and their “undisciplined mediaeval hosts” in Egypt with special notice of “the strategically important island of Malta.”

These “bold and even fantastical” ideas, as author Stuart Reid writes, proved no less so than the relatively small British invasion force that won a string of improbable victories to take Egypt from the French in 1801. European leaders could imagine that Napoleon could negotiate a peace that allowed France to keep Egypt as Napoleon envisioned the Suez Canal.

The British army at that time “had been defeated in Europe and unsuccessful in the Caribbean—at terrible cost.” King George III’s military that prepared to drive the French from Egypt was not the army that had lost the American Revolution but appeared so much worse.

Sir Ralph Abercromby, “an elderly, half blind officer with no command experience,” had achieved some successes in Flanders in the late 1790s and now commanded the effort in the Mediterranean. Reid describes Abercromby’s subordinates as appearing equally unsuitable or worse.

Instructions to Abercromby centered on supporting any pro-Royalist French resistance and British allies Austria and Portugal, which after Austria’s defeats, Reid describes as policies “more delusional than realistic.” Napoleon, now ruling France by coup, sought and failed to obtain a truce to allow his army in Egypt to return to France, making the ensuing campaign unnecessary.

Abercromby’s invasion of Egypt began badly with problems of intelligence, naval transport, and weather, all made up for by bad decisions of the French commanders and the bravery of the King’s officers and soldiers on the ground. “British losses were relatively high,” however.

In Egypt 1801, Reid tells the battles in great detail but with clear, engrossing, and lively prose in the best tradition of military history literature. The British had well-trained men against acclimated French veterans. The high casualties on both sides speaks to the courage of the men in both armies.

Neither side in Egypt had brilliant commanders (Napoleon had returned to France in late 1799). “The British won” because of the brigadiers, colonels, captains, etc., “but above all by the sheer hard fighting determination of the ordinary British soldiers amidst the most arduous conditions.” French morale was a different story.

The great turning point became the siege of Alexandria “with its network of garrisons, depots, and supply routes.” “The British got in amongst the rear areas” and the French soldiers surrendered rather than risk capture, then enslavement or execution, by the Turks and their allies. After Cairo surrendered and its garrison was returned to France, Alexandria finally gave up as well.

The great Egyptian adventure could have turned out differently many times, but Reid does not discuss the consequences and the “what ifs” of the campaign, a strange omission considering the later successes of the British army in the Napoleonic Wars and the importance of Malta and Egypt in World War II.

The book includes lengthy quotations from British dispatches and color illustrations of almost only British soldiers. Appendices go into detail about the units in the opposing armies. Egypt 1801 has annotation.