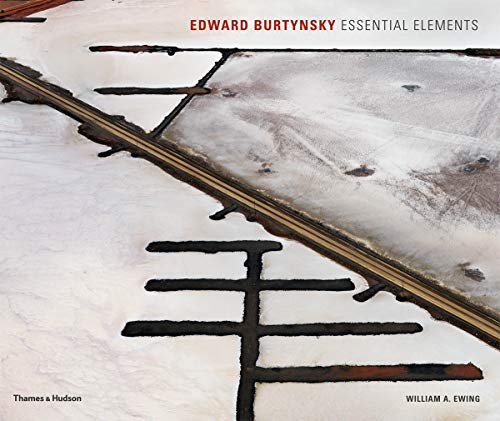 Edward Burtynsky’s aerial photographs in Essential Elements go beyond the kind of satellite images and views that Google Earth has made commonplace in recent years. His photographs taken from the air deliver an essential truth in a powerful manner: The real cost of our modern lifestyles is that we ravage the Earth in a savage way. Our dependency on metals and fossil fuels is very destructive.

At first glance his aerial photographs are beautiful abstractions, but as one continues looking you realize the horror of what you are seeing. Those glowing orange brush strokes in lemon yellow expanses are actually rivers filled with poisonous chemicals and materials that are polluting our world.

Burtynsky’s aerial photographs could never be confused with satellite images. His choice of color, lighting, composition, perspective, and extended sharpness articulate his style and vision as an artist that goes beyond merely documenting a scene. And while not all of his images are photographed from the air they do range from a world wide canvas, from the Canadian oil sands to China's gigantic dams under construction, oil refineries, ship yards, salt mines, and automobile tire dumps.

For instance, the image Silver Lake Operations #1, 2007, is a reddish brown texture surrounding a mass of concentric irregular black lines that culminate in a black center and green shape. It is actually an aerial photograph of a silver mine with a green chemical waste pond—a visual oxymoron, dazzling in execution but horrifying in its implications.

Burtynsky has also chosen to juxtapose some of his images with counterparts: the image Silver Lake Operations #1, 2007 is opposite a page that shows a cityscape, Houston Skyline, 1988. These two images together illustrate one of his early concepts, as stated in the book, that “those skyscrapers must have left corresponding massive holes in the ground somewhere else on the Earth’s surface. . . . The photographer likes to think of some quarries as inverted skyscrapers.” A concept that links what we create in physical form with is source of origin.

Burtynsky has created 148 images that astound the imagination with their detail, variety, and scale as in the Shipbreaking series, which shows Bangladeshi workers who slice up the steel and iron of massive junked oil tankers, or the landscapes that appear from the air as gouged impasto paintings. A fascinating imagined jumble of the work of Franz Kline and Antoni Tàpies.

There is so much impressive imagery and written material in Edward Burtynsky’s Essential Elements that it is impossible to absorb it all in a single sitting. The book covers his work in five sections of Plates and Passages from the early 1980s to the present, and includes essays by curator William A. Ewing, other contributors, and commentary by Burtynsky that set the mind afire with stimulating concepts. His brilliant photographs, superbly reproduced in a large 13 x 11 inch format, persuade with an unshakeable argument for reflection, changing our ways, and saving the planet.