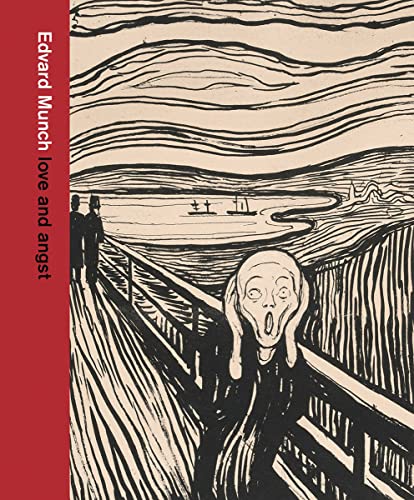 “Edvard Munch: Love and Angst is clear and deliberate in its scope and raises awareness of a highly prolific, yet mostly hidden side of the artist, ultimately justifying Norway’s continued pride.”

France had Paul Cézanne. Austria had Gustav Klimt. Germany had Ernst Kirchner. And Norway had Edvard Munch (1863–1944). Now England has Munch as well.

Best known even beyond Europe and throughout the shelves of Art History 101 textbooks for his painting The Scream (1893), there is much, much more to Munch then that singular image. Edvard Munch: Love and Angst, the British Museum exhibition catalog, shares part of the Munch story by reflecting on a tiny portion of Munch’s prints oeuvre.

In Norway, Munch’s artwork is just part of everyday life. Like a Jasper Johns flag encaustic, or an Andy Warhol soup can print, Munch’s paintings are iconic representations of Norway’s culture and artistic heritage. And, like Johns and Warhol, Munch’s story is too well known to incite the home country to pay any more attention.

That does not mean that his work is any less significant; rather it means that it is time to tell his story to a new audience. The British Museum has brought to life a fresh opportunity to get to know Munch through small subset of his prints: haunting woodblocks, innovative lithographs, and radically modern etchings.

The world of printmaking was a big deal during Munch’s lifetime. Munch was in high demand, and the market for illustrations was in full swing. Munch’s technical printing processes pinpoint the creative contributions he made to this art form. For many, Munch is renowned for his prints and not necessarily his paintings.

Far above and beyond The Scream, Munch left a vast legacy. The Munch Museum alone houses 1,150 paintings, 7,700 drawings and watercolors, 18,000 impressions of 700 prints, 500 print matrices, and 2,240 books, notebooks, and ephemeral items, work that Munch’s estate left to the City of Oslo when he died in 1944.

Along with the 150 or so reproductions and photographs (yes, The Scream included), Edvard Munch: Love and Angst presents six essays, an interview, and a chronology of Munch’s major life events. The essays contribute to the Munch body of knowledge by expanding on themes of the life and times within which Munch created. They address not only his personal circumstances, losses, influences, thoughts and astute sensitivities, but also consider the broader social, economic, political, and cultural mixture that was present. The incentive behind these writings is to demonstrate that, “Munch was definitely a part of his times. But it also feels like he [was] standing out.”

Due to the various guest writers that were invited to contribute, the essays carry a range of readability with some more scholarly oriented that others. Of the joint British/Norwegian team are: for the British—two curators, an art history researcher, and an author. For the Norwegians—a curator and a novelist.

The interview between Bartrum and Norwegian novelist Karl Ove Knausgaard is the winner of the pack, the most insightful, the most lively, and the most relatable. Who would have guessed that a novelist would have the most thoughtful reflections on art history? Knausgaard, however, is no ordinary writer; he is yet another household name in Norway. Reading one national icon’s comments on another national icon’s artwork is wildly appealing, revealing the intelligence of both Munch and Knausgaard.

While not an exhaustive Munch biography, Edvard Munch: Love and Angst is clear and deliberate in its scope and raises awareness of a highly prolific, yet mostly hidden side of the artist, ultimately justifying Norway’s continued pride.