The Edge of Grace 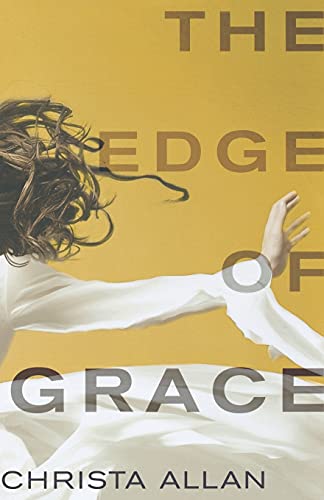 “Homosexuality is an issue that brings out the passion in all concerned. And yet, honest passion is what the novel is lacking.”

Christa Allan’s The Edge of Grace is the latest in what might be considered a form of experimental fiction from Abindgon Press, an imprint of the Methodist Publishing House.

As the publisher describes itself:

“Abingdon Press is an imprint of The United Methodist Publishing House, in operation since 1789. In the early 1920s, Abingdon began publishing a wide array of high-caliber academic, professional, inspirational, and life-affirming religious literature to enrich church communities across the globe. Now beginning its ninth decade, Abingdon Press has a commitment to providing the best, most effective religious publications available.”

Apparently, after years of publishing those “academic, professional, inspirational, and life-affirming” books, Abingdon wishes to be cutting-edge. In recent times, Abingdon has launched lines of special interest literature, each with a Christian slant, perhaps as a means of exploring faith in the modern world, or perhaps as a means of stirring up some controversy on behalf of the staid old press.

The Edge of Grace is the latest of these (it’s author’s previous work for Abingdon explored the issue of alcoholism from a religious viewpoint), as it tackles one of the thorniest and most divisive issues facing the Christian community today. As the author herself presents it, right up front:

“On an otherwise ordinary, cartoon-filled morning, my son Ben sat at the kitchen table spiraling a limp bacon slice around his finger. His last ditch effort to forestall doing his chores. I was having a domestic bonding experience with the vacuum cleaner. My last ditch effort to forestall the house being overtaken by microscopic bugs, dead skin, and petrified crumbs. I’d just summoned the courage to attempt a preemptive strike on the intruders under the sofa cushions when the phone rang.

“I walked into the kitchen, gave Ben the ‘don’t you dare touch that phone with your greasy bacon hands’ stare, and grabbed the headset.

“It was David. ‘I wanted you to hear this from me,’ he said.

“An all-too familiar sensation—that breath-sucking, plummeting roller-coaster feeling—I’m thinking he’s been fired, in a car wreck, diagnosed with cancer, six months to live, but, no, it wasn’t as simple as that.

“He told me he was leaving in a few days for a vacation. With a man. Leaving with a man. Crossing state lines from Louisiana to Mexico to share sun, sand and sheets with a person of the same sex.

“He came out of the closet, and I went into it. For perhaps only the second time in my life, I was mute. Not even sputtering, not even spewing syllables. Speechless.

“‘Caryn, are you still there?’

“No. I’m not still here. I’m miles away and I’m stomping my feet and holding my breath in front of the God Who Makes All Monsters Disappear.

“I think I hear God. He’s telling me I’m the monster.

“Wisps of sounds. They belonged to David. ‘Did you hear what I said? That I’m going away?”

“I hung up. I didn’t ask ‘Why?’ because he’d tell me the truth my heart already knew.”

Actually, in this brief passage, Christa Allan tells us pretty much everything we need to know about her work.

First, although she is taking on an issue that causes a great deal of distress and misery, she chooses to address it glibly (“Crossing state lines from Louisiana to Mexico to share sun, sand and sheets with a person of the same sex.”) instead of writing more honestly and directly about how secrets, especially sexual secrets, can divide a family and a community, especially a community of faith.

In this the author disappoints. Especially that she chooses the moments in which adult clarity is needed to allow herself and her characters (the saint-like brother David being the sole exception) to fall under the control of her inner Irma Bombeck, giving what might have been a much more powerfully written book a sort of “ah, gee whiz” effect.

Second, it is important to note that, given that the book was apparently written with the purpose of exploring the impact that coming out of the closet has in modern Christian America, God seems to be relegated to the sidelines in the lives of all the characters in the book. None seem interested in a personal or ongoing relationship with God, and even those who might be considered religious (among them, once more, brother David and his boyfriend) seem to have substituted a church for an actual religion or a personal relationship with God.

Add this to the brother’s sudden announcement of his homosexuality in a place—New Orleans—and a time—post 9/11 America—in which such announcements are commonplace enough that his sister’s subsequent crisis of faith—an odd thing to have when the arena of faith seems to have been largely unexplored in the character’s life—which seems largely contrived.

The book is weakened into rather formulaic pulp when after the brother’s announcement of a rather dramatic change in lifestyle (he had until recently be engaged and apparently quite happy in a relationship with a woman named Lori), he disappears from the narrative for the first full half of the book, only to return only to return via a melodramatic deus ex machina that itself leads to the expected happy ending comprised of equal parts of unified family and religious rapprochement.

Indeed, the first half of the novel seems to have been lifted from another book. In it we are told the story of Caryn’s happy marriage and of her husband’s sudden death from a genetic disorder, leaving Caryn to raise her perfect moppet of a son on her own, and forcing her to find some means of employment.

For a hundred or more pages, we, along with Caryn, drop Ben off at school, enjoy an ongoing coffee klatch featuring many rather revolting flavored coffees with best friend and neighbor Julie, attempt of build a catering business to keep the mortgage paid and occasionally mourn husband Harrison, who appears in ghost form in these pages more than brother David—the catalyst of transformation, after all—does in the flesh.

It all seems rather beside the point. When David’s homosexuality is discussed, as it is with best friend Julie and the brother’s ex-fiancée Lori, it always seems to be the case that Caryn reacts with more difficulty to her brother’s admission than does anyone else. And yet, her reaction itself is also left unexplored.

We are never given any reason why Caryn might object to homosexuality, or news of any underlying homophobia that might underlie her reaction. In that she is all but devoid of religion—other than the polite, vaguely-churchy of those who visit on Christmas and Easter—she is given no religious object and offers no political or moral reason for cutting her brother out of her life. Instead, her reaction—that which casts her brother, the person who, more than anyone else, helped her recover her footing after the death of her husband—seems more a plot point than anything else.

Even more troublingly, given that The Edge of Grace itself is the product of a religious publisher, there is no exploration of the most fertile material of all—the potential for friction between God and a “newly” gay man. Admittedly, it is refreshing to read any material published by a religious institution on the subject of homosexuality in which the word “abomination” does not appear. And yet, the Seinfeld-ian kneejerk response “Not that there’s anything wrong with that” offered by the author, and put into the mouths of all characters gay and straight, seems unsatisfactory to the reader who expected a more potent and honest wrestling match between faith and flesh in the telling of this tale.

But then, like “Melrose Place,” this tale seems to be set in a world in which gay men hug each other with their hips pushed far apart and spend their time either traveling to drink icy drinks on exotic beaches or decorating their kitchens. This, too, disappoints, as author Allan seems hell-bent to keep the mood light and the dialogue brittle, even when she chooses to work with issues involving sex, violence and death.

God knows there are opinions all around the issue of homosexuality—opinions that are and are not informed by scripture, which is as often used as a cudgel to punish as it as a means of enlightenment. There are opinions that genuinely separate and alienate families, that cause gay men and women to be attacked and beaten on the streets and cause young gay men and women to commit suicide.

Homosexuality is an issue that brings out the passion in all concerned. And yet, honest passion is what the novel is lacking. There is a feeling of paint-by-the-numbers to this novel that makes this reader suspect that Abingdon Press, in creating new works in Christian fiction, may be willing to sacrifice artistic freedom on the part of its authors for the sake of a homogenous Christian message. If so, this seems to be a terrible mistake.

However pure and wonderful the Christian message might be, it can only be strengthened when presented through the personal prism of a talented author who has been given total freedom and trust to work at the top of his or her game.