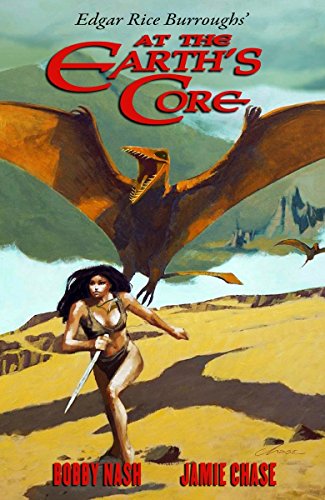 Grand adventure stories often take place in exotic locations among exotic peoples and feature exotic creatures. After all, who could have a grand adventure in their hometown among mundane family members, possibly quirky but hardly exotic neighbors, and creatures no more unusual and unique than a loyal canine or demanding feline? Escapism was not designed to keep you rooted to the everyday. And don’t we all love those imaginative tellers of tales who take us on such adventures and keep us on them until the very last moment of what we hope will be a satisfying resolution?

Edgar Rice Burroughs (1875–1950) was one of the most beloved of those tellers of tales. He is most famous, of course, for creating Tarzan and an Africa (which he never visited) that bore little resemblance to the actual continent. But he also created other locations that suffer during reality checks, such as Barsoom (known as Mars by the unimaginative), and Pellucidar, which resides in reality in the liquid hotter-than-hell nickel-iron outer core of our Earth. Absurd stuff. But not so absurd 100 years ago when Africa was known as the Dark Continent, serious people believed there might be a civilization on Mars, and no one really had any idea what might be at the center of the Earth.

In such locations one might have adventures full of strange wonders, unbelievable dangers, breathtaking awe, and equally breathtaking horror. Adventures to test one’s mettle, smarts, perseverance, and even capacity for love. All in the relative safety of one’s favorite reading nook. Adventures quite grand indeed.

And if the author has the skill to visualize the unreal, as Burroughs did, and convey that to the reader, all the better. But still, no matter how believable an author can make an exotic world in words, we sometimes hold fast to the old “seeing is believing” adage, and love to have that world drawn up to draw it out and to be put before our eyes.

Books of Burroughs’s era often featured a few illustrations of select scenes. They were a welcomed aid in making concrete the author’s imagined world. Sadly, this is rarely done anymore. Happily, though, we have graphic novels that can make adaptations of their purely word-based cousins, illustrating not just selected scenes, but the complete story (if not always with every detail included), from start to finish.

Modern-day pulp author Bobby Nash and Jamie Chase, a fine artist with many gallery shows who has also worked extensively illustrating graphic novels, have created for Sequential Pulp Comics a dynamic, dramatic, and quite faithful graphic novel based on At the Earth’s Core, the first of the Pellucidar novels by Burroughs.

The hero of At the Earth’s Core, David Innes, unlike John Carter of the Barsoom novels, is not a trained warrior. He is the heir of his father’s mining business who takes a gamble on a potentially crazy old man’s invention. Abner Perry convinces Innes that his “Iron Mole,” basically a sub-terra firma craft with a drill bit for a nose, will be able to burrow through the earth—presumably looking for precious metals and such stuff—far faster and deeper than mere mortals with pick axes. As such a device would obviously be revolutionary and lucrative, Innes funds its construction and joins Perry on its maiden voyage.

Unfortunately the Iron Mole works better than advertised and goes much deeper than planned. In a harrowing, out-of-control trip, Innes and Perry are shocked to find themselves going miles and miles below the Earth’s surface. No amount of effort can turn them around. Eventually, after traveling 500 miles, their air is depleted and they lose consciousness. But then fresh air revives them. They have broken through the surface—or better said, a surface—and come to a halt.

Thinking at first that they are in some strange locale on the same Earth’s surface from which they had started, Perry soon realizes—and convinces Innes—that they are actually in the center of the Earth, a self-contained land under a perpetual noonday sun, which is actually the illuminated inner core of the earth. The land itself, which they later learn is called Pellucidar, has no horizon, for it is the interior of the outer core shell surrounding that hot, sun-like inner core. Unfortunately, none of this is made clear in the graphic novel. Just one of several details missing in the adaptation.

But what is not missing is the immediate danger to Innes and Perry as they are attacked by a giant prehistoric sloth, and they must run for their lives. A pack of howling wolves join the chase. And proto-human creatures snatch our heroes and take them to relative safety in the trees.

This is just the beginning of the adventures that include and involve enslavement, dinosaurs, the extreme relativity of time, pterodactyls, that damn always high noon sun, fierce battles—and giant gorilla-like soldiers serving the dominant race of intelligent flying reptiles with hypnotic abilities, fourth dimension telepathic communication skills, and a taste for both human flesh and human vivisection. For there are recognizable human tribes in this land way down under. Some of great beauty, which brings in a love interest for David Innes in the very fine form of Dian the Beautiful.

Jamie Chase's painted illustrations beautifully bring forth the land of Pellucidar and its occupants. When the story moves ahead certain pages are laid out in progressive hard-border panels. At other times a page will feature melding images to capture the flow of quick action. And then there are the full page reveals when we need to gasp in terror or awe, or just to take a moment to let our eyes wander over a landscape. Chase is in full command of graphic sequential storytelling.

The nature of a graphic novel is such that an adaptation from a prose novel could not have included all that Burroughs created. There are only hints here of Perry’s deep religious evangelism, discussions of comparative evolution, human chauvinism, human ignorance, the strangeness of time—and Burroughs’s sly humor, best shown in an almost rom-com, screwball comedy scene between Innes and Dian the Beautiful, as their different cultures cross their common purposes. For these, one will have to turn to Burroughs’s original novel. But that is no bad thing.

What Nash has done, though, is preserve the adventure, the deep dangers, the wild escapes, the crafty intrigue, the loyalty of comrades—the escape from the mundane that Burroughs was so good at.

Nash and Chase’s presentation of the world of Pellucidar is one readers will want to return to. In both this work and, it is hoped, in adaptations of the six other novels of the Pellucidar series.