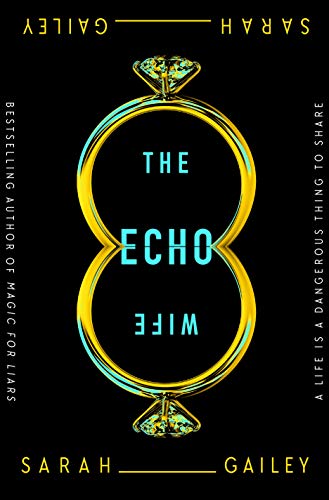 Evelyn Caldwell tells herself “I am not a monster,” but she may not believe it. Evelyn is a self-centered, work-obsessed woman who has devoted everything to her scientific career. That career, however, involves growing human clones and regularly killing them if they don’t turn out quite right. Evelyn rationalizes that the “specimens” aren’t really human, and thus what she does is not wrong.

That belief comes under strain when Evelyn’s husband creates a clone of her named Martine. Instead of using the clone for organ donation or some other short-lived purpose, he designs a more gentle, biddable version of Evelyn to take her place as his wife. Before he can enjoy his new wife for very long, however, he ends up dead, and Evelyn and Martine are thrown together to deal with the consequences.

The science in this novel is difficult to accept. Adult clones can be grown in weeks from a DNA sample by a single scientist working alone in a lab. After the clone grows, its mind can be “programmed” through unexplained means, controlling behaviors like assertiveness, bravery, squeamishness, cleanliness, and the ability to take afternoon naps. Most difficult to accept, the scientist can somehow insert the original person’s memories into the clone’s mind, even choosing which memories they wish to include and which they don’t.

Fortunately, this novel isn’t really about the science. It’s the story of a damaged woman with an abusive childhood who can’t form healthy relationships, even driving away all the interns she employs at her lab. She excels at her work but can’t come to terms with how unethical it is, even when she literally comes face to face with the proof. She is continuously haunted by her father—not the fear of abuse, but the all-too-reasonable fear of becoming just like him. “She made a space for a thing the shape of my father to fit into,” Evelyn says about Martine, “and the gravity of that space was so, so powerful.”

“I will not pretend that it did not occur to me to kill her,” she says, and the fact that she resists that temptation seems to be as high a level of goodness as Evelyn is capable of. She tries to solve the novel’s dilemmas the best way she can, and in the end, finds a solution that at least suits her own needs. Is she a monster? The reader will have to decide.