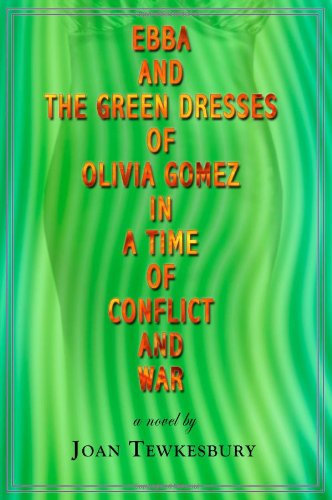 “Engaging and inventive, Ebba and the Green Dresses of Olivia Gomez in a Time of Conflict and War is an ambitious and confident novel by Joan Tewkesbury, a veteran writer for stage, television, and screen.”

Why Joan Tewkesbury, a veteran writer for stage, television, and screen, waited so long to throw her hat into the literary world is a mystery to this reviewer. But if the result is her debut adult literary novel Ebba and the Green Dresses of Olivia Gomez in a Time of Conflict and War then it was well worth the wait.

The title alone should give you a hint at what the book is about, referencing the family/political novels of contemporary Latin American writers of magical realism, where elements of fantasy and spirituality naturally mix and mingle with “reality.”

Phillipa Marie, better known as Ebba, because she likes the way it feels on her lips when she says the Bs, is either 11 going on 12 or 12 going on 13—her abusive mother can’t seem to remember which.

As you can imagine, Ebba’s mother, a former cantina singer named Carlotta Pavon, who sees Ebba as “an accident,” is a real piece of work. Sick and dying, Ebba’s mother becomes obsessed with her own death, yet drags it out a lot longer than both she and Ebba would’ve liked.

But ultimately it’s her death and the “accidental” deaths of the town’s mayor and his mistress that suddenly launch not only the story of Ebba’s coming of age, but a number of fascinating storylines that Ms. Tewkesbury weaves together with impressive skill and confidence, leading Ebba, the town of Elena and its people directly through the heart of evil and treachery and finally toward redemption.

Funny, sad, beautiful, horrifying, shocking—all the stories are told through 130 or so interconnected vignettes, a sort-of literary flipbook that highlights the author’s skill. Add to the mix an un-watered-down prose style that’s definitely not for the kiddies or the politically correct and you have the sum total of this unique offering.

There’s an epic battle for possession of three green satin dresses that goes beyond the grave. There’s an inappropriate and perverse but oddly romantic relationship, including an unforgettable dance atop of dead seagulls. There’s a Noriega-like military leader with a bazaar attachment to a jar full of human ears and another jar containing the heart of his predecessor. There’s a tarot card reader with an uncanny gift and a serious attitude. There’s a brave father’s quest to find his missing son. There’s a frightening mountainside bus ride from hell. There’s an underwear war, a paralyzed doctor and his loose assistant, and a preacher with miracle dirt, and much much more.

For those who study the novel and its various forms, pay close attention to clothes in this work, especially old and new dresses, which often signal important changes within the characters and the overall story. And since children are the real subject of this work, be sure to take note of adults who act like children and children who behave as adults. It’s with these characters that the real story is told.

Bottom line: Joan Tewkesbury’s debut adult novel Ebba and the Green Dresses of Olivia Gomez in a Time of Conflict and War is a challenging adult literary novel for serious readers.

Frank Mundo is a writer based in Los Angeles who has been reviewing books for over a decade. His award-winning book, The Brubury Tales, boasts a foreword by bestselling author and critic Carolyn See.