Eat Street: Recipes from the Tastiest, Messiest, and Most Irresistible Food Trucks 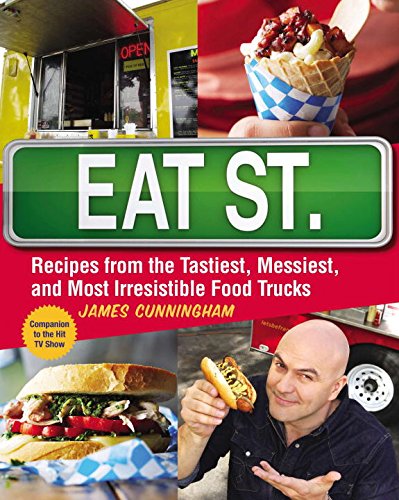 “. . . one of those fun and usable cookbooks that will be marked, tagged, dog-eared, and dripped on with yet another secret sauce.”

Though most would never admit it, I enjoy watching cooking shows as they bring up fond memories of the “roach coach” vending trucks, gleaming, greasy wheeled kitchens stopping at our family’s New York bicycle store in the mornings, serving coffee, bacon and egg sandwiches, and sweet rolls.

So when given the opportunity to review the Cooking Channel’s comedic host James Cunningham’s Eat Street, I buttered my fry pan, tested, tasted, and was teased by real tailgating experiences from a new generation of cooks and trucks.

There are four things to explore when reviewing a cookbook: the food, the recipes, the stories, and the pictures. Recipes are easy to come by, so the criterion here is “food you will not find in Fannie Farmer’s or at Denny’s.” And boy, does James Cunningham deliver!

Today’s mobile chefs and entrepreneurs are creating fusion mixes at an unbelievable pace in a plethora of different vehicles. Like their bricks-and-mortar cousins, a restaurant on wheels must not only have great food, but must be fast. Having long lines is good. Having long lines that are moving is much better. And the customer needs to eat standing up, so presentation and delivery take on entirely new challenges. You gotta love street vendors.

With the exception of a few entries that have prep times of a few hours to a few days (like pizza dough), most recipes took less than 15 minutes from prep to plate and were all hand ready—napkins required.

Amazing is the variety of mixed cuisines that show up in Mr. Cunningham’s collection. Mexican-Asian Saigon Shrimp with Ceviche anyone? Or a Hawaiian Bulgogi Burger from a Mexican/Korean fusion truck? How about something a bit sloppier, like the Terimayo Dog from the “Japadog” truck in Vancouver. A triple-cheese brie melt from the Big Apple? My favorite: Seattle’s Grilled Chicken Sandwich with chipotle-mayo sauce.

The desserts are equally impressive. Okay, most will not attempt the Apple Pie “Kool-Aide” from Ian Kleinman’s ice cream truck at home. He uses liquid nitrogen to “cook” his creations. But the Diablo’s Delight cream cheese and jalapeno jam frosted “donuts” were to die for, and kids will have a blast making the Pergoy Boyz’s Carrot Cake Pierogies. Homer Simpson should have it so good.

The culinary formulas are simple to follow, allowing for experimentation. The Ham Hock, Cheese and Egg Pie from London, England’s “Eat My Pie” needs some modification to fit some American palates. Then there are the Maple Bacon Cupcakes from Miami’s Sugar Rush; I added Missouri pecans.

While waiting for something to heat up or cool down, read the sidebar notes about various vendors and their vehicles: San Francisco’s Thomas Odermatt and his rolling rotisserie. From the Bronx, Fred Donnely advertises an oil change for your jalopy with a pulled pork sandwich for your belly for only $34.95.

Not yet hungry? Look at the pictures. Bright, full of juices and flavors, you could gain ten pounds just staring at them. Check out Uncle Gussy’s Pork Chops with Lemon Potatoes and Lansing Michigan’s Lamb Sausage and Arugula Salad with a simple olive oil dressing. How about a Mac and Cheese Cone with Bacon Bling—kid perfect! Then there is Austin’s bright purple Beet Home Fries from the East Side King.

There are three elements amiss or missing from Eat Street. Paperbacks used and used again do not survive well with traditional glued bindings—they fall apart. My copy is going into a binder.

For the foodies who travel, an index of the cities where each of the featured trucks can be found would be great. New York, Orlando, London, Austin—the trucks are spread out, and knowing what or who to look for in the next town would make the visit just a bit more enjoyable.

Then there are the trucks. Pictures are almost all missing. If you have not been to Boston, New Orleans, or Seattle lately, the trucks don’t look like your father’s “roach coach” anymore. From the traditional box vending truck to 8x10-foot converted travel trailers, fire trucks, and ambulances, the new trucks are as cool as their food is good.

Small glimpses of New York’s Gorilla Cheese and Miami’s Mr. Good Stuff show a range of graphics that draw in the customers. The interior of a restaurant is as important as the exterior of the mobile vendors. Among the missing is barefooted Angus Dennoon’s The Everybody Love Love Jhil Muri Express, serving Asian cuisine in London and San Diego’s Mangia, Mungia Mobile with its deep fried meatball lollipops. I wanted to see much more.

If you watch The Cooking Channel’s Eat Street, if you enjoy cooking or eating (or both), this is one of those fun and usable cookbooks that will be marked, tagged, dog-eared, and dripped on with yet another secret sauce. You may want to put Eat Street on permanent display on that underused cookbook holder in the kitchen.

Is anyone up for a New York Kosher for Passover Chicken Teriyaki Pizza, with a Chili Verde sauce? Mangia, Mangia!

David Rosman is an award-winning editor, writer, professional speaker, and college instructor. He also co-owned a restaurant in Denver and worked his way through college as a stand-up comic.