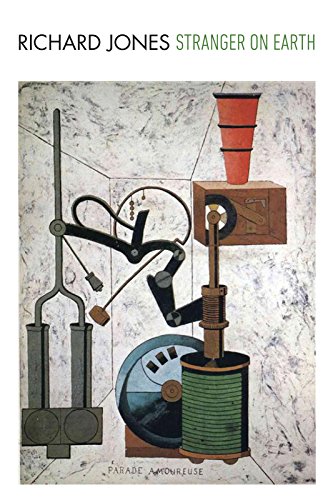 Stanger on Earth by Richard Jones is a collection of personal poems inspired by landscapes, ranging from Virginia to Italy, and beyond. Almost all poetry is derived from memories, and Jones utilizes his memories of family, history, and culture to craft poems full of clear images and rich detail.

Upon first glance, the reader will immediately notice Jones does not use stanza breaks in his narrative poems. He does this to create poetic flow, so the reader does not pause. This is risky because the lines start reading like cropped prose, instead of poetry, which leans true in many instances. Nevertheless, the line breaks are gracefully crafted.

Ironically, one of the most poignant poems, “The Coffin Shop,” is written in couplets with clear stanza breaks—one of the reasons the poem is very apparent in the middle of the book. Here are some lines: “I asked my grown boys if they remembered / the coffin shop. I’d taken them there // when they were little. The storefront / was only blocks from our old house // and driving by one day I’d stopped. The poem continues to describe a stroll around the shop to “consider the timeless art.” The poem is about time and permanence. It captures a sentimental memory when the poet told his sons how much he loved them, and when that memory was buried in a coffin to retain its value and beauty: “deep into those boxes of shiny satin and velvet.”

The concept of beauty, and all things beautiful, is explored in the majority of these poems, to the extent that the word “beautiful” is used almost too much. It is used twice in “Madeleines”, a poem in which the poet compares himself to Marcel Proust while baking cookies with his daughter. Here is one instance: “After my wife, / nothing is more beautiful than my daughter’s eyes / opening in the morning, her eyes catching the light.” The poet’s daughter drinks milk instead of tea, in opposition to Proust’s preferred beverage, so the poet captures this precious moment in time, a moment when his daughter transforms ordinary baking and French lessons into a “beautiful” arrangement. It is here that “the immense architecture of memory will prove faithful.”

For those of us who are not Marcel Proust scholars, here’s a short Britannica.com definition of his philosophy: “Proust’s conclusion is that the life of every day is supremely important, full of moral joy and beauty, which, though they may be lost through faults inherent in human nature, are indestructible and recoverable.”

“Life of every day is supremely important” is the raison d'être for Stranger on Earth. All poems capture particular moments in time to undeniably prove, with images, how important and precious they are, not only for the poet but for the essence of human life.

Here are the 1st two lines of “The Black Raincoat”: “I’d like to say a good word of praise / for my long black raincoat.” The poet describes how the coat always protected him, as if an old friend, throughout his travels. Then one day he wears his raincoat to a funeral where it is hung from a hook with “a few raindrops stubbornly clinging to the hem, / a few raindrops rolling down the empty sleeves / and falling.” The raincoat becomes a metaphor for hope in a room of sorrow.

Jones is an expert at finding eccentricities, finding the unusual in unusual, and then spotlighting them. He writes through exposition with clear images and detail.