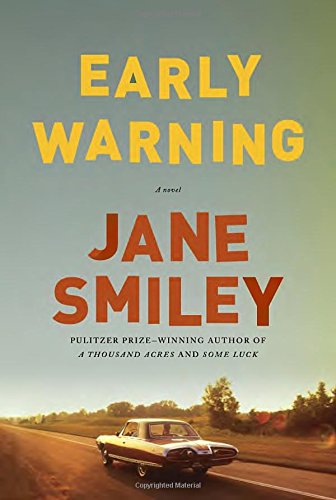 “Images are so clear it’s hard to believe you’re not in the story yourself, and people are so well drawn you’d swear you know them personally.”

Some series can be read out of order, but Jane Smiley has undertaken an epic tapestry that needs to be read in sequence. It covers 100 years in the life of one family, starting in 1920 on an Iowa farm; and as the generations roll by, they show us what life was like during each era. Book 2 picks up in 1953 and carries us through 1986.

As in the opening volume (Some Luck), each chapter comprises one year and cycles among the parents, children, spouses—a different mix each time—in disconnected yet interwoven vignettes. Smiley is a master of characterization as well as language, so each person has a distinct voice and unique story. Combined, they demonstrate that the true main character is the family itself.

Thankfully, a family tree is provided in the front matter. Readers who don’t have a terrific memory, or who don’t read the books back to back, will need to refer to it often. That adds an element of labor to reading the novel, though the vignettes themselves go down easy. Images are so clear it’s hard to believe you’re not in the story yourself, and people are so well drawn you’d swear you know them personally.

It’s just that there are so many of them . . . making it hard to focus on someone to root for as they encounter life’s travails. The scope of the work, too, dilutes the sense of progress toward a goal that characterizes most novels.

This is where author skill and reputation really count. Smiley has shown over and over that she knows what she’s doing (and has a Pulitzer Prize to prove it), so we know we can trust her to deliver a rich literary experience. The knowledge allows one to relax and become a spectator, letting the saga flow around and through.

Early Warning, unlike Some Luck, has a high percentage of characters who aren’t particularly interesting or likable. At the same time, they’re not bad enough to hate. This flattens out the pleasure of reading such a well-wrought tome, because for the investment of time and attention, there’s a low emotional payback, even though the book itself isn’t sour. Of course, that feeling will vary per reader, some of whom will love everyone.

Individual readers’ ability to relate to the characters and times probably depends on what age group they belong to. The majority will overlap this volume’s timeframe and thus have the strongest response. Although Smiley’s style is to use well-known events to place the characters in context, it seems at times like a name-dropping parade. Anyone who grew up during the period will recognize things instantly and understand their implications; but if not, what’s being presented may be unclear.

So far, the saga is a big, juicy, fictional representation of Life in America, with a You Are There feeling. Regardless of what you think about the individual volumes, by the time you’ve finished book 2 you’ll be feeling part of the family and really want to know how everything is going to turn out.