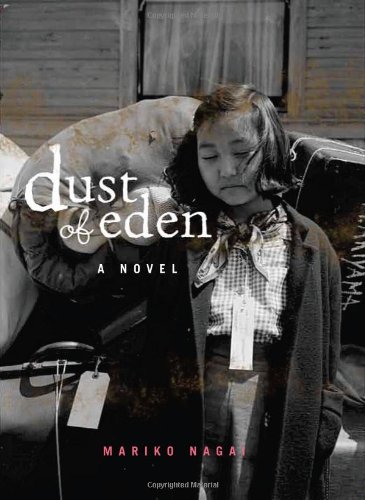 “An important and poetic look at life in WWII U.S. Japanese-American internment camps but one that fails to engage young readers with an empathetic main character.”

She is rehearsing Christmas carols with her Sunday school choir when Pearl Harbor is bombed and US anti-Japanese sentiment explodes. When called “Jap Mina,” she responds, “I’m not Japanese, I want to yell. I’m an American, I scream in my head, but my mouth is stuffed with rocks; my body is a stone, like the statue of a little Buddha Grandpa prays to. . .”

During the holidays, Mina’s father is imprisoned without charge and doesn’t rejoin the family until a year later, aged and exhausted. Mina, her 15-year-old brother Nick (Toshio), her mother and grandfather are forced to leave their house, their cat and Grandpa’s prized rose garden in the care of their neighbors.

They are bused first to the ironically named Camp Harmony at Puyallup, Washington in April of 1942 where the family is submitted to many heartbreaking indignities. In August of ‘42, they are sent to Hunt, Idaho at the Minidoka Relocation Center to spend the rest of the war.

First-person verse is interspersed with letters from Mina to her father, to her BFF Jamie, and to Nick; and later from Nick to the family. In both letters and verse, Mina complains of lack of plumbing and awful smells, leaks, crowding, long lines, biting bugs, spiders and snakes, overcooked vegetables and canned sausages, an overcrowded classroom that’s too cold or too hot, mud, dust, obnoxious guards, (who broke the cookies Jaime sent) and a plaintive “Why are we here, what did we do. . .?”

Most chilling are rumors of a Japanese American man shot trying to escape his camp, “In Oklahoma, or was it Montana?” At first she has our full sympathy, but it wears away little by little.

While Mina observes and reports difficult events eloquently, beyond her initial humiliation, anger and concern for her family, the reader never gets to know her. Other than one gratifying time she yells at a guard, Mina is passive, as befits her gender, era, and culture.

We judge a character by her actions under pressure. A passive character is difficult to know. Not knowing translates into not caring. Because young people often are more passive, children’s literature insists on a main character with whom readers can identify intimately.

Anne Frank’s wartime diary is epic not just because it’s nonfiction, but because the reader understands Anne’s deepest, heartfelt fears, longings, hopes, and opinions—from the mundane to the profound—as WWII closes in on her. Maryann McDonald’s recent Odette’s Secrets, fiction also in verse and set during WWII, is about a younger Jewish girl “hidden” as a Christian child in the French countryside and is firmly rooted in the protagonist’s emotional experience. Sadly, Dust of Eden is not.

Did Mina have no friends in the camps? No crushes? No arguments with her mother? What does she really think about her parents’ resignation, or Nick’s defiance? About her family’s old country and its aggressions?

Mina mentions with rare positivity that inmates built bathrooms, a swimming pond, and put in irrigation for a vegetable and fruit farm. And as the second year in Idaho wears on, an enlightened schoolteacher shows up, and Grandpa resumes growing roses, until he gets sick and dies in his garden. Mina does reveal her love for her grandfather. But after three years of war and adolescence, and now 16, Mina has changed only in that she acknowledges she must reconcile her American and her Japanese halves.

Mina’s brother Nick is the most transformed and matured by events, his choices, and actions. His righteous anger and defiance to outside authority, and eventually to the authority within his family, is channeled when he is given the chance to enlist. He seizes it to prove his loyalty against the vehement wishes of Father and Grandfather. “America doesn’t trust us, so why should we help them?” “I am an American, Nick says. . . This is my home.”

Nick joins a special U.S. Japanese unit when he turns 18. Plot developments are communicated in several letters, two of which are never sent as they detail the tired, scared, dirty teenage German soldiers who surrender to Nick’s unit, and Nick’s emotionally devastating part in reaching Dachau.

In the epilogue, Nick is sent to Tokyo, “so flattened out, so black and burned,” to help with the Occupation. He works as a translator and to find and deliver orphans to orphanages. Here finally, he’s perceived not as Japanese but as American.

Dust of Eden sheds needed light on a shameful period during U.S. history that caused the suffering of tens of thousands of American citizens and their relatives. But in the hands of this skilled writer, it could have achieved much more.