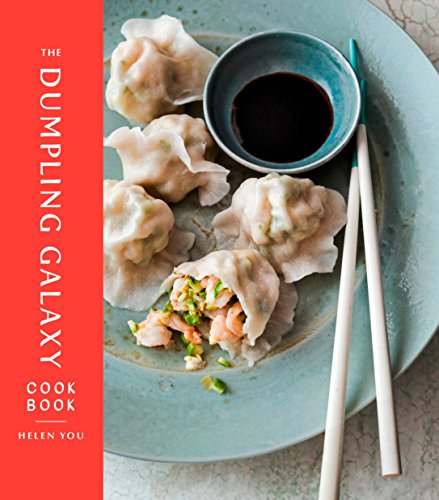 “Use The Dumpling Galaxy Cookbook to celebrate a holiday at home or gather friends around your kitchen with laughter, chatting, and fun working your hands to make your own dumplings.”

Dumplings are not only comfort food for Chinese people, but are a part of Chinese culture. In China, making dumplings was a part of family gatherings, usually at the kitchen table; the room filled with laughter, dumpling makers happily chatting.  Even the kids would participate by rolling out the dumpling dough to help the adults.

The author, Helen You, comes from the Tianjin region in the northeast of China. She still “clearly remember(s) watching her mother and grandmother roll out dough and make hundreds of dumplings.” The “seed” of dumpling making was planted in her head at a young age, and after many years her passion blossomed into a restaurant and now this book.

Her passion for making dumplings was strong enough to give her the courage to quit her job in order to open a small dumpling shop in Flushing, Queens, which later grew into a real dumpling restaurant called Dumpling Galaxy. It is very clear that Helen You’s book comes from her heart and years of experience making dumplings.

In her book, You says: “A dumpling is the perfect food: proteins, vegetables, and seasonings all wrapped up in an easy-to-eat bundle of carbs”. This is very true! A little dumpling hides all flavors in it. It surprises you when you bite it; juicy and tender meat and fresh vegetables jump in your mouth. I always tell my students in cooking school that ‘dumplings have a complete dietary and nutritional balance —protein, starch, fibers, all in one.’”

Open the book, and the first recipe in classic dumpling section is “Pork Soup Dumplings.” So many of my students have asked me to teach them how to make soup dumplings. Here you are! The secret of soup dumplings unfolded. The most classic of classic dumplings is the Pork and Cabbage Dumplings because pork and cabbage is a perfect marriage of flavors and texture. The Egg, Chive, and Glass Noodle Dumpling recipe in green dumplings category is another favorite. Only people from northern China could create these wonderful, tasty dumplings.

In the chapter of Faraway Flavors, we are invited to use our imagination to create our own flavors of dumplings. Here you find recipes such as “Chicken Broccoli Dumplings,” which uses one of America’s most popular “Chinese dishes,” and “Curry Beef Dumplings” with its Southeast Asian influence.

The instructions are very clear and easy to follow. I asked one of my cooking class students to follow the “Shrimp, Egg, and Asparagus Dumplings” recipe from this book. In 30 minutes, we stood in our kitchen tasting these delicious dumplings. The only way the dumplings could be improved would be if we also followed the recipe to make our own dumpling wrappers.

Talking about making dumpling wrappers and shaping dumplings—this part is not easy. This is the only place where I do not agree with Helen You. She says in her introduction that dumplings are simple to make, but making good dumplings require a lot of practice. I have been teaching Chinese culinary skills in this country for almost thirty years. Most of my students can make very nice dumplings in a short time after my hands-on instruction. However, I have to encourage them not to give up and keep practicing all the time, otherwise it is very easy to feel frustrated.

It is a brilliant idea to use “Galaxy” to make a connection with dumplings! The possible varieties of dumplings are like the countless stars in the galaxy. The Dumpling Galaxy Cookbook is one of best dumpling cooking books by far with its simple format, clear instructions, and fantastic photos.

Use The Dumpling Galaxy Cookbook to celebrate a holiday at home or gather friends around your kitchen with laughter, chatting, and fun working your hands to make your own dumplings.

Shirley Cheng is Professor of Culinary Arts at the Culinary Institute of America.