Dumb History: The Stupidest Mistakes Ever Made 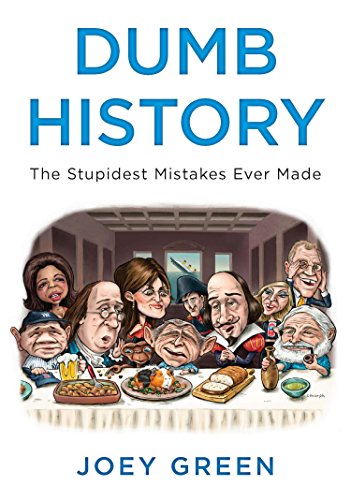 “This is simply a collection of incidents Mr. Green seems to believe are ‘dumb,’ when many are simple errors.”

Really good political humor is usually limited to fictional tales, nonfiction backstories and standup comedic routines. Dumb History does not fall into any of these categories.

Alas, Dumb History is more of a repeat of silly things that most will already know, do not care about, or are simply not interesting than it is of the “stupidest mistakes ever made.” It reads more like a survey of history that anyone over 30-years of age would have either lived through or is already familiar with. There is little insight into these episodes, rendering them superficial and lacking in engaging depth.

This is simply a collection of incidents Mr. Green seems to believe are “dumb,” when many are simple errors. For example, a short note titled “I’d rather be Kipling” recalls an error found in the New York Times. “On May 7, 1995, the New York Times identified Kafiristan as an imaginary place invented by novelist Rudyard Kipling. Kafirstan is the former name of a region in northeastern Afghanistan.” (Yes, that is the entire segment.)

This is neither dumb nor silly, and is representative of most of the “history” found in this book. Kafirstan was used in Kipling’s 1888 short story “The Man Who Would Be King” and was a real province of Afghanistan. Examining a map of Afghanistan today, Kafirstan is nowhere to be found.

Research today makes this discovery easy. But in 1995, when the column was written, the Internet was in its infancy and Wikipedia and the CIA’s The World Factbook were not yet conceived.

Another story is titled “Hanoi Jane,” concerning Jane Fonda’s 1972 trip to North Vietnam. Was it stupid? You bet and caused her much distain since. More than once Fonda, not realizing the extent her displeasure with the Vietnam War and her visit would be used as North Vietnamese propaganda, has told the public she was young and stupid.

Dumb history? OK, maybe. “Stupidest” mistake? Perhaps in her case, yes. But who cannot say that at one time we were all young and stupid, as opposed to being old and silly today?

Cast throughout the book are specialized sections with titles like “Bible Blunders,” mostly errors in biblical translation or grammatical errors; “Spelling Trouble,” self-explanatory; “The Wit and Wisdom of Dan Quayle,” the mocking of the Vice President’s incomparable skills in English; and two sections concerning general misstatements by the famous, near famous, and infamous. None of these are earth shattering or the cause of historical change. Most are not funny. Most are trivia in the most trivial sense.

More was expected from Mr. Green, a former National Lampoon writer and Clio winner. In other books, his wit is usually closer to the bullseye.

Dumb History does not live up to its title or the reputation of the author. There are a few laughs and groans between the covers—emphasis few.