Dulce: Desserts in the Latin-American Tradition 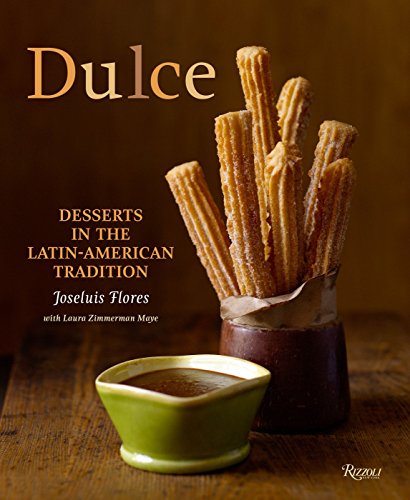 Would you like some sugar with your sugar? If so, Dulce is the book for you. This is a book that more than lives up to its name.

Written by the pastry chef for two of Douglas Rodriguez’s restaurants, Dulce gives bakers classic Latin-American desserts and interesting variations of them, such as a classic tres leches cake and another flavored with coffee and topped with a chocolate-kirsch sauce. Like so many of the recipes in the book, the ingredient list for the coffee cake is not for the faint of heart (or the clogged of arteries). Granted, the recipe serves 18 to 24 people. But with 10 eggs, 1 cup sugar, 2 cans evaporated milk, 1 can sweetened condensed milk, 2 cups cream, 1 cup coffee liqueur, and a sauce that uses 2 cups of chocolate chips and another cup of cream, you’ve only just begun. Yes, you could stop there, but the recommended accompaniments include cherry ice cream (milk, cream, sugar, cherries) and chocolate tuiles (butter, sugar, corn syrup).

It does help to consider the portion sizes when your eyes start to bug out at the ingredient lists. Most of the flans and puddings serve 8 to 12 people; a chocolate mousse with rum serves 16. Still, 18 brownies (from a 9-by-13-inch pan) seems like a skimpy yield from nearly 2 pounds of chocolate, 1 pound of butter, 10 eggs, and 3 cups of sugar. The granitas and fruit desserts come, toward the end of the book, as a welcome change.

Of course, all those ingredients and huge servings could be worth it if the food tastes great. As long as dulce suits you, the recipes generally will satisfy.

The author’s (and the region’s) serious sweet tooth shows in nearly every recipe. Even a quinoa pudding, which boasts the nutritional value of high protein and calcium, will set your teeth to aching with evaporated milk, whole milk, sweetened condensed milk—and some sugar for good measure. Although it took significantly longer to thicken than the 8 to 10 minutes the recipe specifies, the pudding did prove tasty in small portions.

Then there’s the recipe for dulce de leche. This, too, produces an intensely sweet caramel, but it skips the can of sweetened condensed milk most recipes use for a from-scratch version.Milk, sugar, vanilla, and corn syrup bubble for up to three hours to produce a thick, golden sauce. Unfortunately, a cook needs to be close by for the entire three hours, stirring often to keep the mixture from scorching, but patience has its rewards. On low heat, carefully watched, the dulce de leche produces an intense filling for alfajores, classic butter cookie sandwiches.

A cheese flan, reminiscent of cheesecake, took far less time and effort. Creamy and less eggy than standard flans, this version, with cream cheese and the ubiquitous sweetened condensed milk (and, for some reason, a extra tablespoon of sugar to go with the sweet milk), requires making the usual caramel for flan, but the rest of the ingredients need just a quick whirl in a blender. As tested, the recipe made more caramel than necessary, but with some cream, the leftovers made a great caramel sauce.

A simple, quick confit of pineapple offers the unusual combination of smoked paprika, vanilla, and cardamom; again, it is tongue-twistingly sweet. The lime ice cream inspired by a drink called “To Die Dreaming” packs a powerful lime punch, although it is more sherbet than ice cream, with ¼ cup cream to 2 ½ cups milk.

The recipe that flopped in testing was, oddly, that pictured on the book’s cover: churros with a chocolate dipping sauce. Again, the sauce made far more than necessary, but, spiked with allspice, cloves, and vanilla, it made great leftovers for ice cream or hot chocolate. The bigger problem was with the churros themselves, which start out like a choux paste batter (in which flour is cooked in butter and water in a saucepan). Unlike choux paste, the recipe calls for no eggs, so a cook is left with an extremely stiff batter to pipe through a pastry tip into hot oil. Even if your hands can push the dough out, the lack of eggs means the churros don’t puff during frying, and don’t have much flavor, even when rolled in a cinnamon-sugar mix.

Some of the recipes needed a tighter copyedit. For example, some of the granita recipes refer to another recipe that explains the freezing process, but two leave out those details. Walnut cookies are made as drop cookies, but then the recipe talks, without explanation, about pre-rolling the dough, freezing it, and cutting it into shapes. The quinoa pudding makes no mention of the need to rinse quinoa thoroughly before using, though a quinoa bread pudding recipe does. And oatmeal guava bars call for an “11-by-7-inch half-sheet pan” that presumably should be an 11-by-17-inch pan (it would be hard to fit cookies with the four sticks of butter used here into an 11-by-7 pan).

Those are troubles that will discourage a brand-new baker. For discerning bakers, though, Dulce offers a reasonable introduction to Latin-American sweets.

Reviewer Sharon Kebschull Barrett is a food writer and the author of Desserts From an Herb Garden and Morning Glories (St. Martin’s Press). She is also the owner of Dessert First, a custom bakehouse.