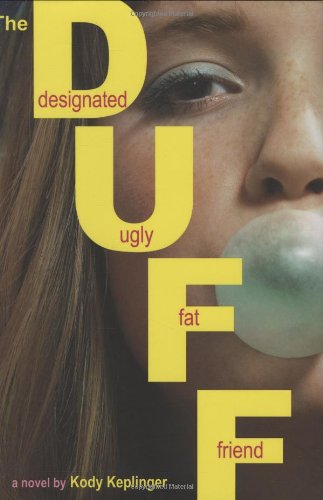 The Duff is the debut novel of another young adult on the rise in the literary arena: eighteen-year-old Kody Keplinger.

What is a Duff you may ask? That is a most important question. The Duff is an acronym of sorts. It stands for the Designated Ugly Fat Friend. Huh? Still not sure what that’s about? It means the ugly girl in the group. The girl that makes all the other girls look pretty and feel better about themselves, because the Duff is clearly not as attractive as the rest.

Bianca Piper, seventeen, is the Duff in her group. She didn’t know it until rich, super hot, gets-in-everyone’s pants Westly Rush tells her so. Romantic wisdom according to Westly says that a guy always has a better chance of getting with the gorgeous girls he desires if that guy makes nice with the group’s Duff.

Bianca has always despised Westly and his man-whoring ways. His insult adds fuel to the caustic, bone-cutting barbs that she is more than willing to throw at him or anyone else who gets on her last nerve. Then things begin to spiral out of control with her family and Bianca finds herself taking refuge in the most unlikely of places: Westly Rush’s bed. Could a super hottie like Westly ever feel anything remotely real for a girl like Bianca?

Kody Keplinger has made what sounds like a fairly simple premise resonate with depth, wit, and a realistic teen point of view. Her characters are well fleshed out and even her minor characters manage to highlight issues that are pertinent to teen girls today, indeed such concerns are timeless: sex, casual and otherwise and its consequences; fear of losing your friend when she finds love; and love and all its complications, including using sex as a form of self-medication. All of these are some of the themes woven throughout the story.

There is a significant use of profanity by Bianca, the protagonist. This reader works with teens on a regular basis and grasps that profanity is often a large part of their verbal repertoire, but initially the “F” bombs and fairly regular use of other such language was rather distracting. Teens may not feel this way at all, and granted, Bianca’s sharp wit and cutting bite made this reader smile more often than not as well as laugh out loud on more than a few occasions.

The Duff also has a resounding story arc. It is a pleasure to follow the characters as they navigate through the teen minefields of high school, love, lust, and the hunt for self-affirmation and self-esteem.

I had the pleasure of meeting the author’s editor last year and she alluded to the fact that it is anticipated Ms. Keplinger will be writing and producing novels on a regular basis. I certainly look forward to her next project.