The Dude and the Zen Master 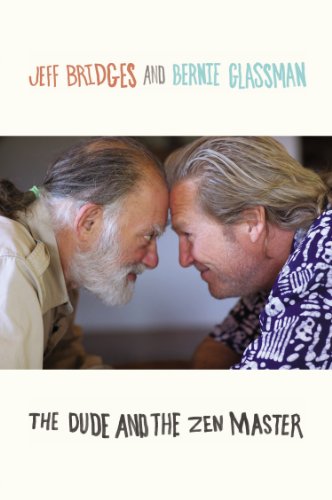 The Dude and the Zen Master is a sprawling, big-hearted conversation on movies, sex, relationships, Zen Koans, and the Meaning of Life that takes place in the course of one weekend spent with actor Jeff Bridges and rocket-scientist-turned-zen-instructor Bernie Glassman.

Dude is one of those “big letters” books, in which the publisher opts for an oversized pica, generous line spacing, and rather huge breaks between speakers in order to pad the thing up to nearly three hundred pages.

And yet any book in which one author, in a moment of self discovery, chastises himself with “Don’t be so un-Dude,” or in which a film director Hal Ashby is praised by way of, “Hal had such art balls,” is something to be both reckoned with and savored.

The conceit of the thing is implied in the title—at least for aficionados of the Coen Brothers’ The Big Lebowski, in which Mr. Bridges played the title character. He who abides.

By way of introduction, Bridges writes:

“So . . . my buddy Bernie Glassman says to me one day ‘Did you know that the Dude in The Big Lebowski is considered by many Buddhists to be a Zen master?’

And so that conversation begins.

In summing up the project, Mr. Bridges continues,

“To me, this book is sort of like a snakeskin. A snakeskin is something that you might find on the side of the road and make something out of—a belt, say, or a hatband. The snake itself heads off doing more snake stuff—getting it on with lady snakes, eating rats, making more snakeskins, et cetera.”

Thus The Dude and the Zen Master is apparently meant for us to use to make things out of.

Thus the dollups of Zen goodness that drop onto the page from time to time:

“Bernie: Let me give you a wonderful Zen practice. Wake up in the morning, go to the bathroom, pee, brush your teeth, look in the mirror, and laugh at yourself. Do it every morning to start off the day, as a practice.

“Jeff: I’ve done that on occasion. Give me a definition of practice.

“Bernie: Row, row, row your boat gently down the stream. Just like we choose a set of oars to row a boat, we choose oars to awaken; I call those oars practices. And there are all kinds: Zen, Christian, Jewish, Muslim, whatever. Or maybe it’s not a spiritual or religious practice but something to do with the arts, or your family, or your work. Maybe it’s looking in the mirror and laughing at yourself.

“My father [television actor Lloyd Bridges] offered me a part in Sea Hunt when I was just a kid, and we practiced different basic acting skills. For example, if we were doing a scene together, he’d say, ‘Don’t just wait for my mouth to stop talking before you answer. Listen to what I’m saying and let that inform you how you talk back. So if I say things one way, you’re going to react one way, and if I say them a different way, you’re going to react a different way.’ Or he’d give me this direction: ‘Make it seem like it’s happening for the first time.’ And after that: ‘No, go out of the room, come back, and do it completely another way. Make a little adjustment.’

“When you meditate, you also often make small adjustments to get back into the space of simply being.”

While perusing the book, the reader applies words like “whimsical” and “insightful” and from time to time “cheesy” and “fixated” to what he sees. Then he reads on, pausing only to watch once more The Big Lebowski.

The Lebowski nature of life follows through, with chapters and sections of the book named for some of the more famous and cherished lines from the movie. The section named “That Rug Really Tied the Room Together, Did It Not?” presents perhaps the best parts of the conversation, just as this Zen conclusion from Bernie is particularly apt:

“Bernie: Words are important because they give us a way of informing and dialoguing with each other, but they don’t necessarily help us experience the thing itself. You can’t use words to experience an apple, you taste it. To experience life, you can’t just give out names . . . it’s the experience that counts.”

What sets Dude apart is the men themselves, their candor, the passion with which they attack their subject—the ways in which they make the metaphorical leaps from Lebowski to life, life to Lebowski.

As such, the book is a worthy companion to the movie, a film that ranks with Groundhog Day as one that speaks particularly to and for men. And that, since it’s release in 1998 has attained a cult status of rabid fans who can quote whole passages of conversation between Walther and the Dude.

And perhaps like those movies this book is a guy’s thing as well: a dude’s guide to enlightenment.

Perhaps it is no accident that while the two guys sitting around talking extol their wives, the loves of their lives, for their patience, their intelligence, and their guidance, it is just the two men who sit around, feet up, with cigars and a nice libation on a dude’s weekend away from home, jawing on and on.

In the end, faced with a thing like The Dude and the Zen Master, a book that quotes the wisdom of activist clown Wavy Gravy alongside Buddha’s own, the reader can only report that it is a lanky, loose-limbed labor of love, a light, fast, entertaining read—and leave it at that. To be more biting in terms of critique seems churlish at best and at worst downright un-Dude.