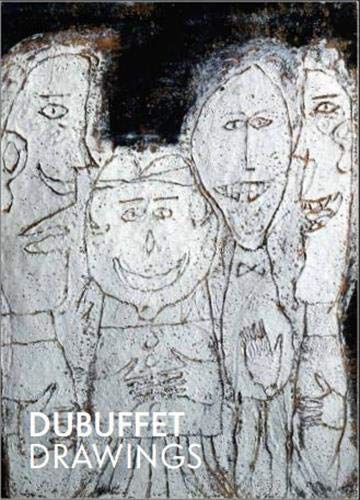 “one of the most influential French artists of the 20th century . . . continues to infuse into new generations of artists seeking their own revolutionary and independent voices.”

French artist Jean Dubuffet (1901–1985) was not your typical artist, attending the established school of painting and creating the established subject matters of portraits, nudes, and landscapes. He was a revolutionary and independent minded inventor, insatiably curious and infused with a larger than life personality. His art shocked and stunned, his commentaries and opinions were scandalous. And yet his art career thrived. Dubuffet Drawings: 1935–1962 is the first volume dedicated to his works on paper, but the latest in a long line of catalogues and exhibits to honor his life’s work worldwide.

It is interesting that Dervaux selected Dubuffet’s drawings as a subject around which to curate this catalogue and The Morgan Library and Museum exhibit. Considering Dubuffet’s own opinion of drawing, “art only begins with drawing poorly, and that the worse one draws the more one is likely to make a creative contribution,” one would think that Dubuffet’s paintings or sculptures would be a more fitting topic.

But Dubuffet was obsessed with drawing. The purpose of drawing, the expressions of drawing, the interpretations of drawing, the drawings by children, the drawings by the mentally ill, drawing in dirt, on glass, on butter. He wanted nothing more than to “animate the paper, to make it palpitate . . . to make a line, a little line five centimeters long; but a line that lives, whose pulse beats.” True to his statements, Dubuffet drew and drew and drew hundreds of sketches for hours on end, year upon year, tearing up many, keeping many more, trying to learn to draw.

What has filtered along into this catalogue is an intriguing display of Dubuffet’s many and varied uses of his drawing. He was not content to sit quietly with a pen and paper. He experimented with ink techniques, with paper fibers, with rustic materials, and even coined his own genre. Dervaux, joined by Margaret Holben Ellis, Lindsey Tyne, Alex Potts, and Cornelia Butler, all contribute to explain Dubuffet’s interests and intents a little bit deeper—his methods and his madness.

There are three main sections of this catalogue: Essays, Letters, and Illustrations. The essays are intelligent, factual, and well written. The Letters section is a select introduction to the proliferate correspondence that Dubuffet kept that documents his opinions of art and drawing. The French originals are also provided alongside the English translations. The final section contains full-page reproductions with commentaries based on the decade, Dubuffet’s stylistic intentions, subject matter, or experimentations with different mediums that try to shed light onto his graffiti-ish or elementary choices.

Far from being childish, Dubuffet’s artwork conveys a very sophisticated knowledge of art and concept. He desired to express much more depth of humanity in his work. With his female nude drawings he tried to “juxtapose quite brutally . . . the general and the particular, the subjective and the objective, the metaphysical and the trivially grotesque.” He wanted to impart his philosophical views into his art and in many cases he achieved this in ways far beyond what any first grader could conjure.

The catalogue is organized in such a way as to invite the reader to skip around. It is not necessary to read through in a linear fashion. Indeed it is probably more helpful to read an essay, then turn to the illustrations and contemplate the way in which Dubuffet’s style and philosophies had morphed from painting to painting, then jump back to another essay or perhaps a letter that he wrote around the same time frame. There are many options here.

Altogether Dubuffet’s Drawings allows one to garner an idea of who this character Dubuffet was and what, in the end, was his creative contribution. Clearly he was one of the most influential French artists of the 20th century and his personality continues to infuse into new generations of artists seeking their own revolutionary and independent voices.