The Drunken Botanist: The Plants That Create the World's Great Drinks 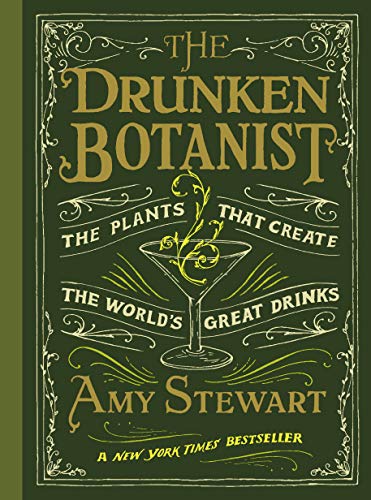 “This is a book you’ll want to drink up, making a point to remember the information tidbits you want to pull out to amaze and amuse your friends at the next wedding, dinner, or cocktail party. Cheers! Salud! Skol! Prost! To your health!”

At a wedding when you raise your glass to toast the bride and groom, there’s another marriage you can celebrate: the union of botany and booze. Without plants and the wonderful chemistry of fermentation, wedding festivities—and indeed any party involving adults—would be considerably dampened.

In her most recent book, The Drunken Botanist, author Amy Stewart explores the odd, unusual, and surprisingly common plants that have produced the world’s greatest spirits (and we’re not talking ghosts!).

Stewart explores the fascinating science and chemistry of more than 150 plants, flowers, trees, fruits, and even a few fungi, revealing all sorts of unexpected tidbits and factoids.

Take for example Agave tequilana, the source of tequila. Although a succulent, the agave is a relative of asparagus, hostas, and hyacinths (these plants all have in common the spearlike growth as the flowers stems emerge). The tequila agave is transformed into a beverage by chopping away the tough, spiny leaves and slowly roasting the heart, called the piña.

Once the piñas are sufficiently infused with the smoke from local oak, mesquite, or other wood for several days, they are crushed under stone wheels called tahonas. The juice is siphoned off and fermented with water and wild yeast. According to Mexican law, tequila can only be made from A. tequilana “Weber Blue,” a cultivar named after Dr. Frédéric Albert Constantin Weber (1830–1903) a French military physician and part-time botanist who was sent to Mexico under Napoléon III. Although his primary area of interest was mushrooms, Weber was the first to describe these agave in botanical literature.

We also learn that vineyard owners and wine makers in California avoided financial ruin during Prohibition by legal, but devious means. They shipped customers wine kits comprised of blocks of dried, compressed vintner’s grapes and a packet of wine-making yeast. The accompanying instructions told recipients not to dissolve the fruit brick in warm water and then add the yeast as the combination would result in fermentation, creating illegal alcohol.

Amaretto lovers may be surprised to learn that the flavor of Amaretto di Saronno, the world’s most popular almond-flavored liqueur, comes not from a nut but from apricot pits. Closely related to almonds, an apricot’s pit may be sweet or bitter, depending on the variety.

In America most apricots are grown for their fruit and have bitter pits, but in the Mediterranean you’ll find the sweet-pit or sweet kernel apricot varieties. One of the oldest sweet kernel hybrids is “Moor Park” which dates to at least 1760 in England.  If you open up the sweet pit of one of these varieties, you’ll find inside a seed that looks and tastes much like an almond.

Traditionally beer is bottled in dark glass because exposure to light gives the beer a skunky, “light-struck” taste. This fact has been known for centuries, but it wasn’t until 2001 that scientists at the University of North Carolina at Chapel Hill determined the chemical process that creates that unpleasant taste.

They learned that isohumulone compounds in hops break down into free radicals when they are exposed to light. These free radicals are chemically similar to skunk secretions, ergo the taste. This unfortunate transformation can happen quickly; some beer drinkers will notice a skunky flavor at the bottom of a pint glass left sitting in the sun while they drank it.

Knowing this fact, why is beer ever sold in clear bottles? Clear bottles are cheaper. To ameliorate potential breakdown problems, some mass-produced beers are made with a chemically altered hop compound that doesn’t turn skunky, and some brewers will sell clear-bottled beers in a closed box to keep the light off them. And that wedge of lime often served with beer? Its acidic taste disguises any skunky flavor.

Until 2006, the bright red color of Campari came from carmine dye, sourced from cochineal, the white fuzzy scale pest found on prickly pear cactus.  Company officials say it was removed due to supply problems.

A section of The Drunken Botanist is dedicated to strange brews. In the Andes, monkey puzzle tree seeds are brewed into a mildly alcoholic ceremonial drink called mudai. To speed fermentation, sometimes the Indians chew the boiled seeds and spit them back into the fermenting mixture.

Saliva enzymes help break down the starches. With an ancestry that goes back at least 180 million years, monkey puzzle trees are special, motivating the Chilean government to declare them a national monument. Hence, mudai is quite possibly the world’s only alcoholic beverage derived from a national monument.

This is a book you’ll want to drink up, making a point to remember the information tidbits you want to pull out to amaze and amuse your friends at the next wedding, dinner, or cocktail party. Cheers! Salud! Skol! Prost! To your health!