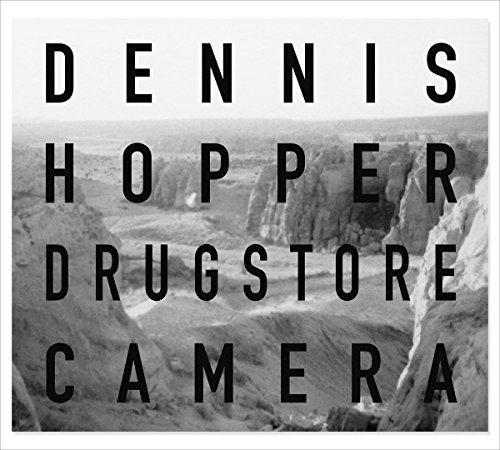 His early photographs revolve around friends and austere landscapes that have a beguiling simplicity. The more compelling photographs have the appearance of washed out or high-keyed tonalities akin to infrared photography. They paint a bare southwestern landscape, almost moonscape-like in its own whitewashed straightforwardness, and reflect the years immediately after Hopper’s success with Easy Rider— his directorial debut that also won the First Film Award at the 1969 Cannes Film Festival.

Those landscapes impart the feeling of someone who is at home and rooted, far from the Hollywood scene. Clearly he loved the outdoors, revered the southwest, and yearned for the apparent simplicity of the southwestern landscape as someone who was seeking to avoid the complications of his life in L.A.

The counterculture of the 1960s with its hippies, recreational drug use, and communal living were not a fad for Dennis Hopper but something that was a part of his life, and this is reflected in his photographs.

His pictures are moody and very much in touch with the freedom of spirit that dominated that segment of popular culture. In the included essay, Hopper’s son Marin reminisces over a period when he was a child of six, and Dennis was 32—after the release of Easy Rider and the purchase of property in Taos, New Mexico—and it sounds like it was really Hopper’s time, one might say his happiest time even though his stardom had not yet reached its pinnacle. His fame would attain greater heights after his roles in Coppola’s Apocalypse Now (1979), and Lynch’s Blue Velvet (1986).

The brief essay by Marin Hopper is touching and insightful as to his father’s life choices, his disillusionments, and dalliances, and affords us a broad perspective on the images, although it does not specifically elaborate on any of the photos.

All of the photographs in the book are printed about the size of postcards, perhaps 4 x 5 inches, but with the wide margins that surround the images they create the fascinating illusion of being matted within the book and enthrall you into lingering on each image. They seem to follow a chronological order although none are labeled.

As Hopper aged, his photographs mirror less of the Zen-like simplicity and spare compositions from the 60s and 70s and focus more on nature. One of the things that is evident in the book is that Hopper had the heart of a poet, which became apparent in his films like Easy Rider or even Apocalypse Now. His photographs are a testament to that poetic free spirit that refuses to be bound by conventionality. It is also echoed in the unforgettable characters he played on screen, as in Hoosiers or Speed.

The photos themselves are black and white, modestly sized on a letter-size page, and handsomely bound. The hardcover binding is beautifully done with large black stamped letters of the title over a photo on the cover, back, and spine.