Drugged: The Science and Culture Behind Psychotropic Drugs 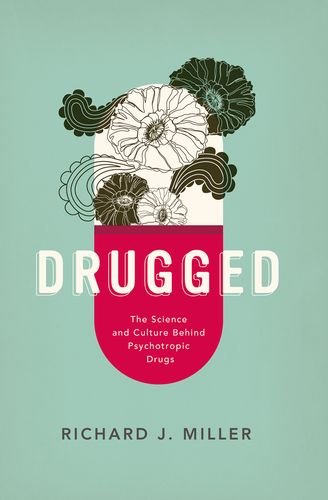 “The author takes neither a pro-drug nor an anti-drug stance, simply describing how human beings have repeatedly drugged themselves throughout the ages.”

Some books grab your interest from the very first page. Other books start slowly and take effort to read. Nonetheless, once finished, many of these books are well worth reading. Drugged: The Science and Culture Behind Psychotropic Drugs is one of the latter.

As the subtitle suggests, this book traces the scientific and historical elements linked to the origin, development, and use of both natural and manmade chemical compounds that affect the brain and the mind. This text looks at a wide variety of medications which are used for medicinal purposes, as well as a number of compounds usually thought of as “street drugs.”

A pervasive and interesting theme is that there are many compounds seen at times as medications, at other times as drugs of abuse—and sometimes as both simultaneously. Antidepressants, antipsychotics, and antianxiety medicines as well as heroin, peyote, LSD, and THC (the active ingredient in marijuana) are all discussed in detail. Although in less detail nicotine, cocaine, and amphetamines are also reviewed. A notable absence is virtually any discussion of the most used and abused drug worldwide: alcohol.

The book attempts to discuss both the cultural and historical elements of these compounds as well as the science of their development and usefulness. When presenting the vignettes associated with any particular drug as well as the drug’s proponents, developers, and detractors, the book is at its best. The stories are interesting, well written, and historically engaging often presenting facts unknown even to those in the field of brain chemistry.

—Amphetamines were routinely prescribed to soldiers during World War II to keep them from falling asleep and to counter fatigue.

—Heroin was named by a research pharmacologist who felt “heroic,” when he ingested it himself. It was also marketed as a cough suppressant “without addictive properties and 100 times safer than codeine.” It was even at one time prescribed for Queen Victoria of England.

—Valium, at one point the most prescribed medication in the world, was discovered when a research lab was being cleaned and a small amount of a compound that had never been tested was accidentally found. After this purely serendipitous occurrence, 8,000 tons of this medication were prescribed in one year.

—THC, the active ingredient in marijuana and hashish, has had perhaps the most number of contradictory positions espoused over the years. First seen purely as a weed, it was then a cultivated crop for the production of hemp used in the making of rope.

At the turn of the 20th century, hashish candies were openly advertised in the magazine Vanity Fair as “A most wonderful Medicinal Agent for the cure of Nervousness, Weakness, Melancholy, Confusion of thoughts, etc. A pleasurable and harmless stimulant.” The first commissioner of the Federal Bureau of Narcotics, Harry Anslinger later carried on a crusade against what he saw as a diabolically evil and dangerous drug depicted in the movie Reefer Madness. Most recently, in addition to its legitimate medicinal use for glaucoma, nausea, and appetite increase in cancer patients, it is now legalized for recreational use in two American states with a number of other states likely to follow.

In addition to the chapters showing vicissitudes in the perception and use of heroin and THC, likewise fascinating are the history of the development of psychotropic medications for a variety of mental health conditions, each of which has its unique history depending on the ideas, goals, and serendipity that has inevitably driven drug design.

True to the subtitle, the book also examines in depth much of the science involved in drug development and the mechanisms of action in the human brain. The science is well documented and shows the author’s clear mastery of the field of neuropsychopharmacology.

Therein also lies a weakness in the book’s subject matter and organization. The science is presented in great detail, most of which is difficult to understand or of little interest to the average reader. Written by a neuropharmacologist and university professor, these sections read more like a textbook than casual reading.

At times, the author drifts inexplicably into discussions of the causes of mental illness, including a lengthy vignette about the musician Robert Schumann. After lengthy failed attempts at diagnosis he was found to have neurosyphilis, an infectious and inflammatory condition.

Much of the final chapter is focused on the author’s presumed hypothesis that brain inflammation is one, if not the primary cause, of mental disease. Presumably included to outline a future course of drug development, the story and chapter does not fit well with the rest of the book. It seems to propose a course for future drug design to treat mental illness, but lacks the justification for this sole hypothesis and ignores myriad other possible causative processes and agents.

In today’s society, which often encourages the use of medicinal psychotropics and tolerates a variety of psychotropic recreational compounds both legal and illegal, the book’s topic is quite timely.

The author takes neither a pro-drug nor an anti-drug stance, simply describing how human beings have repeatedly drugged themselves throughout the ages. Casual readers will likely skip over the more scientific passages presumably of interest only to professionals and scientists. Nonetheless, this book has much to recommend it and many of the stories make interesting cocktail party conversation.