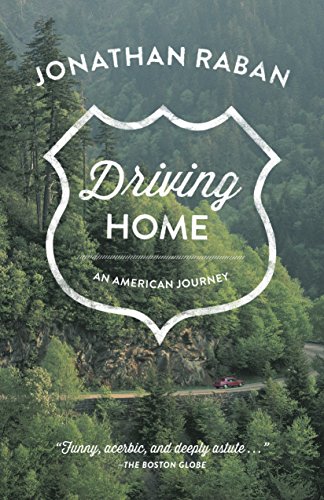 “Highly recommended for anyone who wants to look at life and the United States from a new viewpoint—and to savor the sounds, tastes, scents, and textures while at it.”

The writing and publishing community routinely argues the question of what makes a book “literary.” After reading Jonathan Raban’s latest release, Driving Home, there’s nothing to discuss—this book is literary at the highest level, yet it remains an accessible and absorbing read.

Mr. Raban writes prose like poetry, in that every word counts, every sentence sings. It’s impossible to choose a line or paragraph as a sample, because all are outstanding in their construction, their voice, and their evocation of time, place, personality, atmosphere—even historical and technical accuracy. Mr. Raban sure knows what he’s doing (which one would hope after an output of a dozen books and numerous essays, and awards for both!).

His latest book is a collection of essays and reviews, most of them originally published in top-tier magazines or as forewords to other people’s books. Thus Driving Home is more of a “best of” than a fresh work and makes an excellent introduction to this author.

Although Mr. Raban is at heart a reporter, each item in the collection reads like a story written in an informal tone. He brings to America the perspective of a foreigner, in this case from England; but because he came here to stay, he invests his energies in understanding his new home instead of just recording his observations. His comparisons are intellectual and respectful, and he manages to show, simultaneously, that people in the United States are just like everyone else—but owing to the country’s geography and history, life here offers some unique and fascinating twists.

The collection is arranged in chronological order, providing a sense of narrative and character development as Mr. Raban settles into his new country and engages in its processes. The book opens with his near-novella-length title essay, “Driving Home” (1993), which recounts his exploratory loop through the Northwest, and closes with “At the Tea Party” (2010), a report on a Tea Party convention he attended.

In between, we get book reviews—more like ouevre reviews—of writers both famous and obscure (such as Mark Twain and John Stilgoe), numerous water-themed essays (Mississippi River flooding, coastal waves, sailing, fishing, nautical exploration, whaling), a range of works about the Pacific Northwest in general and Seattle in particular (geographic, political, cultural, environmental), insightful political coverage (Obama and Palin, plus aspects of U.S. government), and miscellanea (on traveling, on writing, on artists and photographers).

The political material begins just past the halfway point in the book but three-quarters through the time period covered, and becomes more prevalent as the Bush era segues into the Obama term. Also about the halfway point, certain ideas, sentences, and pet phrases start recurring, as a working writer draws from his large body of material and reframes it for new topics.

Here’s how Mr. Raban explains his selections: “The pieces that follow are readings—most of them of the American landscape, literature, and politics, along with some backward glances to England that may betray a lurking nostalgia for a society more settled in its shape, more instinctively known, than the one I live in now. I haven’t tried to corral them under thematic headings but have left them in more or less the same order in which they were written. It would be nice to think they can be read as the unfinished chronicle of my attempt to make a home in a place I continue to find fascinating, bizarre, ugly, beautiful, repellent, and generous and whose language I’m still trying to learn.”

The collection provides a smorgasbord experience, letting readers load up their plates and chow down their favorite flavors while sampling new ones and ignoring what doesn’t suit their taste. The reader’s interest, therefore, may not be piqued by every offering, but each of the 43 pieces is worth starting before making up one’s mind.

Mr. Raban invites us into his creative process via the book’s introduction and one of the short essays, “Keeping a Notebook.” In the Intro, he describes how he learned how to read deeply from William Empson’s Seven Types of Ambiguity, which has influenced his subsequent reading and writing. “For reading, of the kind that Empson preached and practiced, doesn’t stop at books, but goes on to make the larger world legible. Trying to understand the habitat in which we live requires an ability to read it . . .”

This understanding pervades Driving Home, wherein he discusses a person, place, or phenomenon through its literature. In “Keeping a Notebook” he shares the duality of the writing process itself:

“Writing . . . is the mirror opposite of traveling . . . all cause, cause, cause, where traveling is a long cascade of one damn contingency after another. Good writing demands the long view, under a sky of unbroken blue; good traveling requires one to submit to the fogginess of things, the short-term, minute-by-minute experiencing of the world. It’s no wonder that my alter ego and I are on such chronic bad terms.

“So—tossing the notebooks into the dunce’s corner of my workroom and feeding a clean sheet of paper into the [typewriter] I’m at last about to find out what really happened to my mobile, purblind self on his travels; what it all meant, and how his voyage fits into the larger story that the book must eventually unfold. Now—touch wood—comes the interesting bit, where the act of writing itself unlocks the memory bank, and discovers things that are neither in the notebooks nor to be found in the writer’s conscious memory.

“You try a phrase out: it rings false. That’s not it—it wasn’t like that . . . you have to mail a stack of rejection slips to yourself before you hit on the phrase that rings true, or nearly true. Successive errors narrow the field to an increasingly fine band, then—Snap! When you do find a match between the provisional words in your head and that shadowy, half-buried recollection of events, there’s no mistaking it; it’s as plain as a pair of jacks on the table. Sentence by slow sentence, you begin to discover the world as it truly was—which is nearly always at variance, and sometimes wildly so, with how it was seen at the time . . .”

This dual perception, along with the diversity of subjects covered and Mr. Raban’s interest in edges—where ocean meets shore or culture collides with culture or past segues into present and future—combine to give Driving Home its depth and readability. Highly recommended for anyone who wants to look at life and the United States from a new viewpoint—and to savor the sounds, tastes, scents, and textures while at it.