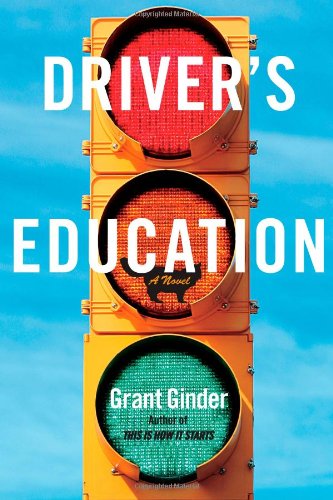 “. . . some very fine writing indeed, . . . I want to read [it] aloud just for the joy of hearing precisely how the words have been strung together.”

Book cover blurbs tend to be embarrassingly over-the-top paeans of praise for the contents, encouraged (paid for?) by the publisher and approved by the author.

The blurb for this book underplays its awesomeness. Grant Ginder’s novel is, indeed, as it says: “In the tradition of Daniel Wallace’s Big Fish, a poignant and eccentric novel about fathers, sons and the power of stories to change the way we see the world . . .” But it’s so much more than that.

There’s a map marked by Finn’s granddad who insists the motley crew must stick to the route he has designated: “When I unfold the paper,” Finn explains, “it smells ancient and important, like newsprint . . . There are cities and towns circled, places my granddad has been . . . Artifacts from his unbounded memories. And then, in the margins, there are new notes: instructions he’s written expressly for me. Like: In Chicago—Never look the Gangster in the eye.”

In a way, it’s also the story of Finn’s father Colin the Screenwriter (the book’s capitalization), who turned to writing screenplays inspired by the classic films he and Alistair used to watch together, and who struggles to reconnect with the old man, even though they’ve been living together again after ill-health knocked the wind out of the elderly adventurer.

In the tale’s telling, the author manages to wrap unselfconscious quirkiness up in some very fine writing indeed, without ever sacrificing the story or the characters. A rare feat, in my reading experience, making it one of those—also rare—books I want to read aloud just for the joy of hearing precisely how the words have been strung together.

Mr. Ginder, who also teaches writing at New York University where his (lucky) students are required, he says, to form connections between, for example, the essays of John Berger and George Michael videos, has all the necessary tools and talent with which to tap into the cultural zeitgeist of our time.

Not only does he write like a dream, he’s also currently “endeavoring to re-tell Virginia Woolf's Mrs. Dalloway through cat pictures.”

Why am I not surprised?