A Dredging in Swann: A Seb Creek Mystery 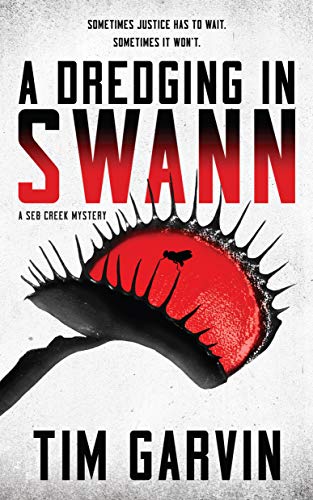 “the narrative passages and direct character actions give the rest of us better understanding of what U.S. servicepeople experience, how they suffer, and a possible path to return.”

If you’re not familiar with Venus Flytraps, then the cover image on this book is a head-scratcher. Even if you do know what Flytraps are and what they look like, it’s hard to imagine what they might have to do with a police procedural mystery.

The title, too, is odd enough to intrigue. But there proves to be a great deal of nasty muck to dredge up in Swann County, North Carolina, and new-series hero Seb Creek has to wade through it all—without getting sucked under.

Seb is a former Marine who fought in the Middle East. He switched to being a stateside Marine MP after recovering from a near-death experience from a combat injury, then went back to college, and finally joined the sheriff’s department under his former commander. Along the way he learned to understand and manage PTSD through music and formed a singing group for veterans and other psychologically damaged people.

This experience created a well-rounded lead character to wade through the Swann dredgings. Yes, he’s damaged and vulnerable, but his internal battles only make him wiser and stronger. Pushed back and forth between right and wrong, death and life, hope and despair—not just in himself, but in all the characters he must deal with in the story—he weighs and balances the moral and legal aspects, and makes sound choices.

More important, his actions and choices are plausible, which suits the novel’s gritty realism.

Now a sheriff’s detective, Seb Creek—“an optimistic cynic”—must untangle and reweave the threads of a decades-old ax murder, the current hanging of an innocent ex-con, Venus Flytrap poaching, a bizarre legacy with a secret at the bottom of a well, a sinister hog farm, stolen missiles from a helicopter crash on a coastal island, assorted drug dealings and missing people, and crisscrossed relationships between family and friends.

Seb’s mother used to date the hog farmer (also a veteran, who won a Silver Star), whose daughter Seb used to date, and whose son Seb once arrested. Through the daughter, Seb meets a potter with whom he falls in love and tries to court while he’s investigating the complex of crimes and striving to recruit more broken souls into the Pass the Salt singers. Meanwhile, he struggles against lingering “battle fever.”

This novel’s take on battle fever and related PTSD give it a depth worth remarking upon. For readers who have not experienced these phenomena, either personally or from having to deal with them in their loved ones, the insights Seb offers are valuable and potentially healing. We’ll need to see reviews from actual PTSD sufferers to learn whether the author nails it through Seb’s voice.

Until then, the narrative passages and direct character actions give the rest of us better understanding of what U.S. servicepeople experience, how they suffer, and a possible path to return.

These all come in a sturdy, interesting detection novel delightfully seasoned with details of place and people. It’s good to know that the author is hard at work on book 2 of this series. It promises to be a winner!