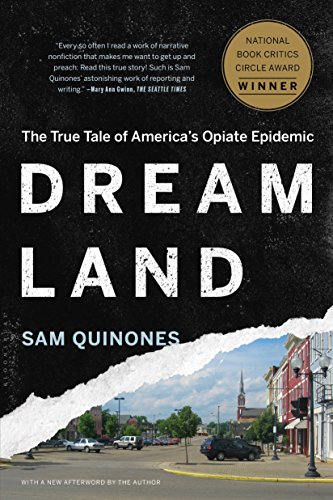 “Dreamland stands as a model of meticulous investigative reporting . . .”

Opiate addiction is all about pain—the pain of addicts constantly seeking relief from torment and of friends and relatives dealing with the fallout. It is also about hunger—the hunger for profit of corporations and dealers on the dark side of the narco-world and the hunger of caring crusaders like Sam Quinones to stop this human tragedy.

Quinones is a veteran journalist and expert storyteller long steeped in the demi-monde of Mexican-American bordercrossings. Dreamland: The True Tale of America’s Opiate Epidemic is an intricate jigsaw puzzle piecing together his findings from intensive investigation of the unprecedented spread of heroin addiction throughout the United States over the past two decades.

Through participant-observation involving interviews with addicts and their relatives, Mexican farm boys turned entrepreneurs, narco-bosses, lawmen, pioneering drug researchers, doctors, and other public health personnel, Quinones weaves together a haunting account of how the underground drug culture of addiction surged like wildfire with the complicity of the medical profession and Big Pharma.

The story starts with the recent revolution in pain management. After centuries of fear of opiate abuse fostered an ethos of underprescription, the medical establishment convinced itself on the basis of a slim body of research that less than one percent of patients ran the risk of addiction. Pain was recast as the fifth vital sign, and patients were told that pain relief was a human right.

The destigmatization of narcotics did result in more humane and effective treatment of severe pain and palliative care. But it also encouraged overmarketing and overprescription. So if you suffered a sports injury, hurt your back at work, or even got a root canal you would be asked to rank your pain on a scale of one to ten, and likely handed a scrip for heavy-duty opiates like OxyContin, released by Purdue Pharma in 1996.  For some patients, this became a starter kit for addictions that drove them to pain pill mills that opened up across the country.

“Via pills, heroin had entered the mainstream. The new addicts were football players and cheerleaders; football was almost a gateway to opiate addiction. Wounded soldiers returned from Afghanistan hooked on pain pills and died in America. Kids got hooked in college and died there.”

Old stereotypes of big city drug gangs with shadowy figures dealing to derelicts in seedy clubs and on dimly lit street corners expanded to manicured middle-class suburbia. Better homes and gardens, new cars, and the familiar facades of Starbucks, Applebee’s, and Home Depot concealed the children of solid citizens overdosing in their locked bedrooms. We spent over a decade in denial that this could happen to us.

Even the heartland’s All-American cities were not immune. Quinones anchors his narrative in the blue-collar city of Portsmouth, Ohio, where a vast swimming pool called Dreamland was the symbol of reproduction of stable family values for much of the last century. As industries fled the rust belt, the pool closed, and the first pill mill in the country opened. Opiates “made easy work of a landscape stripped of any communal girding” as the American dream turned into a nightmare.

But pills were just the tip of the iceberg. The rapid spread of the opiate epidemic was fueled by an influx of cheap Mexican black-tar heroin supplied under a unique and highly effective small business model by the “Xalisco Boys”—primarily working-class young men from the same small agricultural town in the state of Nayarit close to an opium poppy producing area.

The Xalisco Boys marketed their cheap, but highly potent product like a nationwide fast-food franchise, a pizza delivery service. Each heroin cell or franchise has an owner in Xalisco who supplies the cell with heroin. A telephone operator takes orders in a rented apartment, while drivers are paid a weekly wage to make deliveries around town carrying uninflated balloons of black tar heroin in their mouths. If apprehended, they swallow them.

The cells compete, but the drivers know each other from back home, so they are never violent. They live modestly, try to blend in, and are replaced every few months from an endless pool of poor farm boys dreaming of the day when they can make it big in America like their relatives and return to their hometown in triumph.

This product and the ingenious delivery system were a perfect fit for newly addicted Middle America. Black tar heroin was cheap, much purer than its white powder cousin, and easier to process than pills. Delivery was discrete. The young Mexicans were polite, safe to deal with, and even offered specials. As one informant put it: “You didn’t have to leave your house. Dealing with these people was paradise.”

The same elements that made the Xalisco Boys network so successful—the cell network, the small quantities involved, the just-in-time delivery, and the low profile–made it almost impossible for law enforcement agents to identity and apprehend key players, compounded by the cross-country scale and the silence of shame surrounding the affliction of “normal” people.

Nonetheless, Dreamland ends on a somewhat encouraging note. America has been given a wake-up call. We have been reminded of the insidious and pernicious nature of opiate addiction and that Big Pharma and even doctors can be more concerned with profit and managed care than with patient wellbeing. Meanwhile, with increasing public scrutiny, the majority of the most blatant pill mills have been closed.

Dreamland offers an eye-opening, enlightening and mesmerizing account of one of the most important stories of the last few decades, connecting the relentless marketing of pain pills with the surge in heroin addiction through all sectors of society. Fueled by the influx of Mexican product via a brilliant business strategy we get a close-up of how globalization plays out in our own back yard in all its cold calculation.

Although Quinones is a master storyteller, with a knack of bringing hundreds of characters to life, this book is not an easy read and not only because of the depressing subject matter.

The book is long because of the painstaking detail of the reporting and somewhat disjointed by virtue of the vignette format. Because the narrative thread switches back and forth between the U.S. and Mexico, and darts around both chronologically and geographically, the text seems a little disorganized and repetitious, at least until the reader grows familiar with the key players.

Nonetheless, Dreamland stands as a model of meticulous investigative reporting  providing important insights not only the current opiate epidemic but also into the sometimes negative symbiosis between our country and our neighbors to the south.