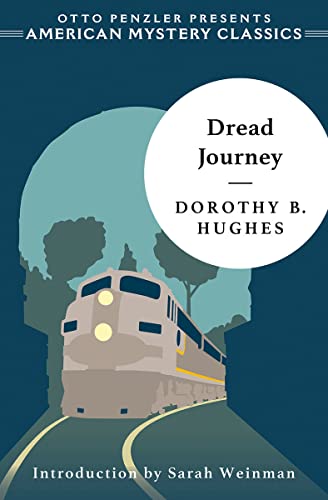 “Dread Journey is one of the best examples of suspense you will ever find in a crime fiction novel. Ever. Guaranteed.”

With these opening words, Dorothy B. Hughes sets down a baseline of suspense that carries the reader from beginning to end in Dread Journey, a classic crime fiction novel by the author best known for Ride the Pink Horse and In a Lonely Place. Originally published in 1945, it has now been reissued by Otto Penzler through his American Mystery Classics imprint.

Set on a transcontinental train traveling from Los Angeles to New York, the novel focuses on the collapsed relationship between Kitten Agnew, a movie star on the way to New York to attend the premiere of her latest film, and Viv Spender, the powerful director and producer who made her a star and is about to cast her aside in favor of his next discovery, Gratia Shawn.

Suspected of having murdered his wife when she became an inconvenience to him, Viv lurks in his compartment plotting Kitten’s demise while other members of the Hollywood colony who are also on the train close ranks around her, sensing her fear like a palpable odor.

Hank Cavanaugh, a war correspondent recently returned from the horrors of the Pacific Theater and trying to forget what he’s seen by getting drunk and staying that way, recognizes that Kitten is being stalked by the “spirit of evil . . . which had dominance in this generation because good was lost . . . He could not let her pass if by his efforts he could save her.”

Even self-absorbed celebrity bandleader Les Augustin, determined not to accept an offer from Viv to work on his next picture for anything less than a million dollars, sticks close to Kitten, Gratia, and the others. He spars with Mike Dana, Viv’s secretary, asking pointed questions about the first Mrs. Spender and overdoses of sleeping pills.

Dread Journey was Hughes’s eighth novel, and it’s a dandy. To begin with, it’s a remarkable display of virtuosity in the use of point of view for the indirect development of characters. In the first chapter the narrator introduces the main players by viewing them through the eyes of James Cobbett, the porter responsible for the sleeping car in which they will be traveling. We see each one through Cobbett’s initial appraisals as they find their places and settle in.

As the train gets underway, we learn about young Gratia, Viv’s new discovery, from the jaded and fearful observations of Kitten, the drunken attention of Hank Cavanaugh, and the languid interest of Les Augustin.

We learn about Kitten through Cavanaugh and Augustin, Hank and Les through Viv, and so on. While trying to remain loyal to Viv, his secretary Mike Dana recognizes his intention to murder Kitten, and through her we see the growing suspicions of the others.

Perhaps the most remarkable use of this technique comes in a relatively unimportant scene in the dining car. Unsuccessful writer Sidney Pringle is constantly underfoot, unimportant to the drama unfolding around him, and repulsive to the others in his obvious failure.

In the dining car, Mike Dana watches Pringle struggle through a bowl of soup while surrounded by Hollywood elite:

“The man sat there quivering, his nose hungry above the soup. His soiled nails crept to the spoon. Unobtrusively he took it up, supped again. He was hungry, only a hungry man would have denied his pride for a mouthful of liquid.”

While Mike puzzles over the apparent fact that Kitten is acquainted with Pringle in some way, the reader is presented with a powerful sequence that reminds one of John Dos Passos and his vivid, image-rich depictions of failure. The contrast between the success of the stars and the degradation of Pringle, as observed by Mike and the others, lends further tension to the atmosphere on the train.

As the climax begins to build, Kitten’s fear bleeds through the car like a toxin, infecting everyone. Mike’s apprehension grows, Cavanaugh becomes almost frantic in his efforts to keep Kitten in sight, and even Augustin becomes defiant of Viv’s efforts to isolate her. It’s a remarkably effective way to maintain an almost suffocating level of suspense.

The choice of a train car as the setting for the action also plays into Hughes’ overall design. People are constantly stepping over other people’s outstretched legs to get in and out of compartments, squeezing into a seat in the dining car, or blindly following the person ahead of them down the corridor, struggling to maintain their balance as the train rocks back and forth.

It’s a claustrophobic environment that heightens the suspense as the chapters roll on. Just one of many things that make this novel so very, very good.

Critics and commentators such as Sarah Weinman, who contributed the Introduction to this reissue, refer to Hughes as one of the world’s finest female noir writers, and it’s a title that’s richly deserved.

But while this novel indeed exhibits traits that are characteristic of hardboiled fiction of the period, lending it a noir-ness appealing to the noir crowd, Dread Journey is one of the best examples of suspense you will ever find in a crime fiction novel. Ever. Guaranteed.

If you appreciate suspense and you haven’t read Dread Journey yet, by all means don’t leave the station without this one tucked into your travel bag.