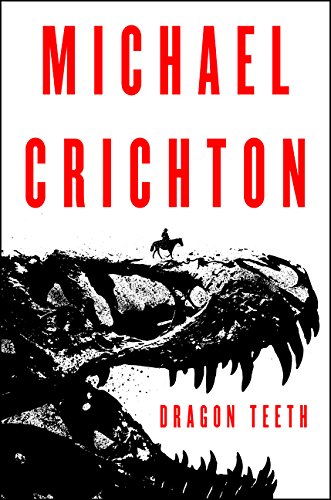 “Dragon Teeth is an effective, page-turning combination of historical fact and fast-paced fiction.”

It goes without saying that the late Michael Crichton is a household name to everyone who loves a ripping good yarn. The author of such blockbuster classics as The Andromeda Strain, Jurassic Park, and The Lost World, Crichton also wrote and directed for the screen. His well-known film hits included Westworld and The Great Train Robbery, along with numerous programs for television, including the series ER.

Readers are now treated to yet another terrific Crichton story, discovered in his archives by his widow, Sherri Crichton. Dragon Teeth is a historical thriller which he likely began working on as early as 1974, when he exchanged correspondence with paleontologist E. H. Colbert. The manuscript was completed in 1989 and then filed away without being published, no doubt so that he could concentrate on other projects, including Jurassic Park, which appeared the following year.

The novel tells the story of the two central figures of the so-called Bone Wars at the dawn of American paleontology, Othniel Charles Marsh and Edward Drinker Cope. Related from the perspective of a young adventure seeker, William Johnson, a fictional Yale student vaguely reminiscent of Charlie Schuyler in Gore Vidal’s Burr, Dragon Teeth takes the reader on a wild expedition into the Old West of 1876.

Venturing into the Great Plains with Professor Cope, Johnson joins the search for dinosaur fossils as the war between the U.S. Army and the Lakota Indians swirls around them. Ending up alone with a wagon-load of precious fossils in the legendary town of Deadwood, Johnson enlists the aid of Wyatt and Morgan Earp in a desperate attempt to escape certain death and deliver his priceless cargo to Professor Cope—and to posterity, as well.

Dragon Teeth is an effective, page-turning combination of historical fact and fast-paced fiction. Crichton brings to life not only the conflict between Cope and Marsh but also the struggle among scientific thinkers at the time to reconcile religious beliefs that the earth was no more than 10,000 years old with Darwin’s theory of evolution, which postulated “at least several hundred thousand years . . . to carry out its effects on earth.”

While we now appreciate that dinosaur fossils must have taken millions of years to reach us, Dragon Teeth drops readers into that period of history when their appearance was just beginning to upset the applecart. Crichton dramatizes several discussions around the campfire on the subject between Cope and Charles H. Sternberg, his real-life collaborator and author of The Life of a Fossil Hunter (1909), that bring the historical period to life and give it a vivid sense of realism.

Crichton also, typically, varies his narrative style with excerpts from the journals of Johnson, Sternberg, and other characters to enhance the “historical documentary” aspect of the story:

“‘We realized,’ wrote Johnson, ‘that the entire cliff face was fairly stuffed to bursting with bones, which previously were invisible to us, yet now were as plain as the nose on your face. But as Professor Cope says, we had to learn to recognize the nose on your face, too. He likes to say, “Nothing is obvious.”’”

It’s a technique familiar from The Andromeda Strain, for example, with its extracts from government reports and memoranda, that infuses his fiction with a strong sense of verisimilitude. Unfortunately, it also tends to disrupt the flow of the narrative somewhat, as the reader’s enjoyment of a scene is sometimes terminated before the action is completed in exchange for “historical documentation” explaining how it turned out. Nonetheless, it’s vintage Crichton.

Taken as a whole, Dragon Teeth is a distinct pleasure to read. The Author’s Note at the end provides us with Crichton’s thought processes as he combined historical research with the crafting of a book of fiction. As Sherri Crichton writes in her Afterword, her late husband “loved to tell stories that blurred the lines between facts and what-if scenarios. You always came out of a Crichton novel, film, or television event smarter and wanting more.”

She couldn’t be more right. Not only will readers want to explore at greater length this period of history inhabited by Cope, Marsh, Sternberg and others after reading Dragon Teeth, but they’ll also be anxious to know if there might be more unpublished treasures waiting in the Crichton Archives to be excavated and brought forward for our reading delight.